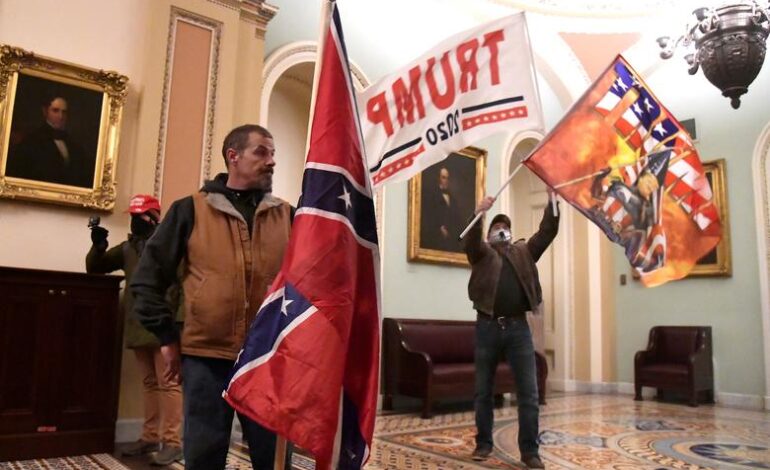 Kevin Seefried holds a Confederate flag after illegally breaking into the U.S. Capitol on Jan. 6. Seefried was later arrested by the FBI, as have more than 100 others who stormed the highly restricted building that day, a siege which led to the death of a police officer. Photo: Reuters

Connected to this is a fear by minority groups, like Muslim Americans, that the anger fomenting around the unseating of Donald Trump, who was the preferred candidate for many White supremacists, will soon be directed at them.

The Council on American-Islamic Relations (CAIR), the nation’s largest Muslim civil rights and advocacy organization, has advised community members nationwide to stay vigilant in state capital cities from now until the end of the presidential inauguration on Wednesday, due to threat of far-right, White supremacist violence and armed protests at all 50 state capitals leading up to and on Inauguration Day.

Trump supporters have been emboldened by Trump and his allies, who say the November 2020 presidential election was fraudulent, a claim many intelligence and election officials, Republican and Democrat, have completely debunked.

“Due to credible threats of violence in the coming week, we urge all members of the Muslim community to stay extra vigilant and avoid their state capitol buildings and surrounding areas until after the Inauguration of President Biden,” said CAIR Research and Advocacy Coordinator Huzaifa Shahbaz. “We also encourage faith leaders to review and enhance the security of houses of worship, particularly those located in state capitals.”

CAIR is also warning any Muslim who makes the choice to be a counter protester to exercise caution and remain safe as they encounter White supremacists. It also says those protesters should be aware of law enforcement officers who target Black or Muslim peaceful counter-protesters instead of the extremists.

It appears that the mob completely overwhelmed U.S. Capitol police on Jan 6., including 32-year-old Officer Daniel Hodges, who was badly  pinned by the mob and thought he might die, as he and his team tried to stop it from reaching members of Congress. But videos show other officers clearly letting the mob in, one taking the time to take selfies with the crowd inside of the building. An investigation into police complicity — and lack of timely backup by other agencies — is underway, but has not yielded real answers.

The U.S. Department of Justice has so far opened 275 criminal cases and the FBI has made more than 100 arrests in connection with the insurrection on the U.S. Capitol Building, which occurred right after a Trump rally on Jan. 6. Trump, who told the crowd to walk up the steps and demand Congress overturn legitimate electoral results and give Trump the election victory, is being impeached for his role in inciting the violence.

The chaos on Jan. 6 led to five deaths, including a police officer who was believed to have died from his injuries inflicted by the mob.