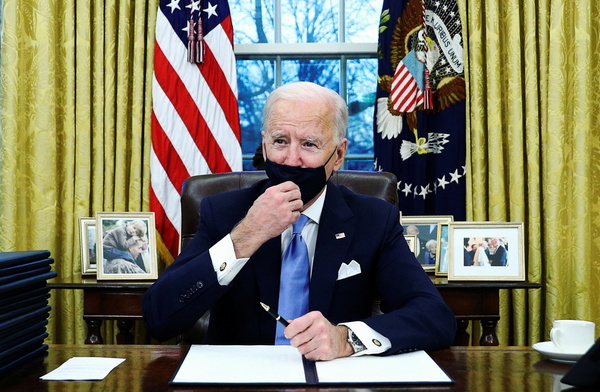 President Biden signs executive orders on his first day in the White House. All photos: Reuters

WASHINGTON, D.C. — Joe Biden followed through with some of his big sweeping day-one promises, shortly after his inauguration as president on Wednesday, Jan. 20.

President Biden signed 15 executive actions, including ending the travel ban put in place by former President Trump on people from a list of Muslim-majority countries. The U.S. State Department is also instructed to restart visa applications for these countries, which includes Yemen. President Biden gets sworn in at the U.S. Capitol, Wednesday, Jan. 20

Legal battles over Trump’s travel ban pushed the Supreme Court to ultimately uphold a slimmed-down, but still damaging, third version of the ban in 2018. The Trump administration also slashed the refugee admission cap. In its latest iteration, the ban blocked citizens from 12 countries — Iran, Libya, Syria, Yemen, Somalia, Nigeria, Myanmar, Eritrea, Kyrgyzstan, Sudan, Tanzania and North Korea — and some Venezuelan officials and their relatives from obtaining a broad range of U.S. visas.

“Today, President Biden revoked the Muslim Ban to make this nation stronger and safer,” said U.S. Rep. Debbie Dingell (D-Dearborn). “By rejecting fear and bigotry, he recognized that this discriminatory policy didn’t just cause pain for Muslims around the world, it hurt our fellow citizens.

Dingell previously stood on the steps of the Supreme Court after the court upheld the ban and supported the U.S. House passing the National Origin-Based Antidiscrimination for Nonimmigrants (NO BAN) Act to repeal all three versions of Trump’s Muslim Ban.

“Lifting this ban as one of his first acts in office clearly demonstrates President Biden’s commitment to uniting this nation and his ability to see the humanity and dignity in all Americans,” Dingell said. “The former President’s ban destroyed lives, caused untold damage to the security of the United States and didn’t protect Americans from terrorist attacks. Now, we must work to restore the faith, credibility and trust of the international communities targeted by the previous administration and this is a significant first step.”

U.S. Rep. Rashida Tlaib (D-Detroit) had been an ardent critic of the Trump administration, especially over its openly racist immigration policies.

“I am glad to see the NO BAN Act, which would prevent any policy like the Muslim and African Ban from being implemented ever again, included in President Biden’s immigration plan,” said Tlaib, who presided over the House vote on the NO BAN Act. “We must ensure this passes both the House and the Senate.”

“It was at our ‘Million Muslim Votes’ Summit that Biden first vowed to end the Muslim Ban on the first day of his presidency,” said Iman Awad, deputy director of Emgage Action. “By making this commitment to Muslim American communities, Biden set an important precedent for American politicians: Our community must be engaged, our votes must be earned and proper attention must be given to policy issues affecting us.

“Today, Biden fulfilled this commitment. The Muslim Ban has caused irreparable damage to Muslim communities domestically and abroad. While its dark legacy will remain and must be remembered, today we celebrate an end to this horrific ban, once and for all.” A long way to go. These are just executive actions.  They are important, but we’re going to need legislation for a lot of the things we’re going to do — President Biden

“My uncle was killed by an air strike just days after the first Muslim ban was signed. Today, we begin the work of undoing the xenophobic, inhumane policies of the Trump administration,” said State Rep. Abraham Aiyash (D-Hamtramck), the son of Yemeni immigrants. “But, we have so much more work to do to repair the deep wounds and pain inflicted by Trump. The work to make families whole again is just getting started.”

The new president is also ordering the wearing of masks and social distancing in all federal buildings and on all federal lands due to the still-raging COVID-19 pandemic, and is ending a national emergency declaration that was the basis for diverting some federal funds to build a wall along the U.S.-Mexico border.

Another executive order reverses Trump’s order in July 2020 to not count undocumented Americans in the U.S. Census, which will affect federal allocation of money and federal representation in immigrant-populated districts.

Biden will propose legislation to Congress to grant permanent status and a path to citizenship to Dreamers, which will affect almost a million undocumented young people who were brought to the country as children and shielded from deportation by former President Obama. The Trump administration challenged the law, but the Supreme Court upheld it. On Wednesday, Biden signed a presidential memorandum directing the Homeland Security secretary to take actions preserving the program.

Biden has also promised to take quick financial action on the COVID-19 pandemic in partnership with a new U.S. Congress that now has an increased Democratic control. The pandemic has killed 400,000 in the U.S. The proposed bill will include direct aid to Americans, moratoriums on evictions and expand COVID-19 vaccine access in a $1.9 trillion plan, though it remains to be seen how Congressional Republicans will react to those demands.

Biden signed three of the 15 executive orders in the presence of reporters at the White House on Wednesday, the first one being the mask-mandate, a second relating to equity for the underserved and a third that lets the U.S. rejoin the Paris Climate Accord.

After Wednesday afternoon’s inauguration ceremony, which was missing the thousands of supporters that are the tradition, replaced instead by 25,000 troops hoping to avoid more pro-Trump violence, Biden moved in safely to the White House.

“Just days after a riotous mob thought they could use violence to silence the will of the people, to stop the work of our democracy, to drive us from this sacred ground, it did not happen,” Biden said in his inaugural speech at the Capitol building. “It will never happen. Not today, not tomorrow, not ever.”

The building was raided on Jan. 6 by a violent mob of Trump supporters who sought to disrupt the counting of Electoral College votes that certified Biden’s victory by the U.S. Congress. Five people died in the chaos that day, including a U.S. Capitol Police officer.

Biden spoke of the growing civil strife surrounding the recent presidential election and the horrors of a continually uncontrolled pandemic raging through American communities.

“To overcome these challenges, to restore the soul and secure the future of America, requires so much more than words,” he said. “It requires the most elusive of all things in a democracy: Unity.”

“We must end this uncivil war that pits red against blue, rural versus urban, conservative versus liberal,” Biden later said. “We can do this — if we open our souls instead of hardening our hearts.”

At the White House, Biden told reporters that Trump left him a very generous letter.

“The president wrote a very generous letter,” Biden said. “Because it was private, I won’t talk about it until I talk to him. But it was generous.”

Trump never officially conceded to Biden’s victory, but did promise a peaceful transfer of power in his last days in office, though he continued pushing baseless claims of mass voter fraud. Trump did not mention Biden by name in his final remarks as president on Wednesday morning, when he boasted of his administration’s record. He was not present at the inauguration, though former Vice President Mike Pence was. The president wrote a very generous letter. Because it was private, I won’t talk about it until I talk to him. But it was generous — President Biden

Top Republicans, including Pence and the party’s congressional leaders, skipped Trump’s send-off and attended Biden’s inauguration instead. Former President George W. Bush and his wife, Laura, were present at the inauguration and joined former President Clinton, his wife, Hillary, the Obamas and the Bidens at a wreath-laying ceremony at Arlington National Cemetery.

There were promises of disruption to the inauguration from some right-wing extremist groups following the Jan. 6 attack on the U.S. Capitol, but only scattered protests occurred on Wednesday.

“I congratulate President Joe Biden and Vice President Kamala Harris on their historic inauguration,” Tlaib said. “This moment will forever be remembered, as will the actions we take moving forward with this administration to improve the lives of residents in Michigan’s 13th Congressional District and across the country. The last four years have brought dark clouds and an enormous amount of pain and hate to every corner of the United States.

“From day one, the previous president blazed a path of destruction and self-interest. Today, we start a new presidency, a new administration, with hope for the future. I look forward to working with the Biden administration to implement bold and aggressive policies advancing economic, racial and environmental justice, as well as strong civil rights protections to ensure that every person has the ability to thrive. We must end the COVID-19 pandemic and ensure we provide much needed and long overdue economic relief to residents.”

Biden also plans to send a sweeping immigration reform bill to the U.S. Congress on Wednesday. Reuters reports that the bill:

Reuters also reported on Wednesday that Biden has promised more executive actions on Jan. 29. These will restore U.S. asylum protections, strengthen refugee processing and set up a task force to reunify families still separated by Trump’s border policies, according to a government memo. Former President Trump waves from a car as he drives past supporters in West Palm Beach, Florida, Jan. 20.

The new Biden administration will also review barriers to legal immigration put in place by Trump over the past four years, including a regulation that made it harder for poorer immigrants to get permanent residency. Biden will also end a Trump program called the Migrant Protection Protocols, which left tens of thousands of asylum seekers waiting in Mexico for U.S. court hearings, with many stuck for months in inhumane tent camps.