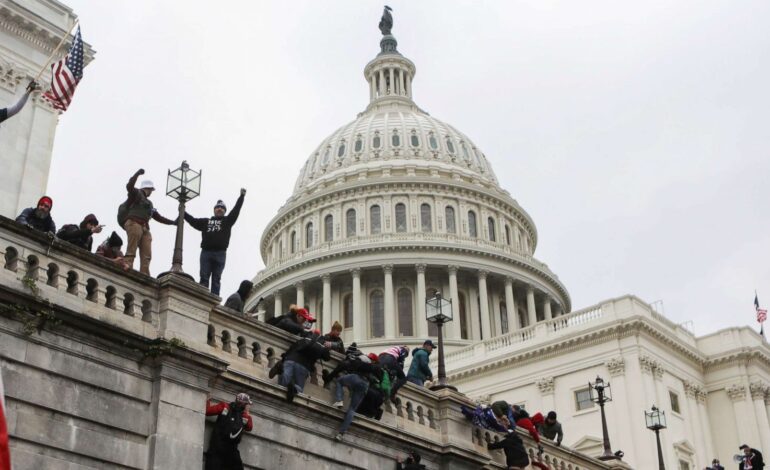 Supporters of former President Trump climb on walls at the U.S. Capitol during a protest against the certification of the 2020 U.S. presidential election results by Congress, in Washington, D.C. Jan. 6.

With a new administration taking office, it is tempting to put the disturbing events of Jan. 6 behind us. But we should not dismiss – or fail to learn from – what happened when the president of the United States incited his followers to storm the Capitol and try to overturn a lawfully decided election.

The event was a dark moment in our history, a crisis that showed we are living in a time of great stress for our republic. The chaos and violence may turn out to be short-lived, but the anger and rage they represent will remain, and we will have to deal with that.

There is bipartisan acknowledgment that Donald Trump’s incitement of violence created a threat to our country and our institutions of government. Now we must work to repair the credibility, viability and legitimacy of our democratic institutions, including the Congress.

What we saw on Jan. 6 was an effort to overthrow the democratic process through force. News media shifted in real time from reporting on a protest to describing an insurrection carried out by a mob. Watching the violent scenes play out on television was deeply disturbing.

I walked through the halls of Congress for decades as a member and as a visitor, and I never lost an appreciation of the Capitol itself and all that it stands for. This magnificent structure has been a symbol of our democracy for 200 years. There, I have watched hundreds if not thousands of members of Congress and staff commit their lives to making the United States a better country. But today in this era of extreme partisanship, the institution seems broken. I want to see it function again. I want to see a return to the business of governing: representatives making speeches, engaging in meetings, reaching agreements and doing the people’s business.

In our lifetimes, we watch and participate in many elections. The voters speak, and we may not have liked the results, but we accept them. The reaction to losing is to move on and come back another day to correct what went wrong. In the November 2020 election, President Trump claimed, falsely, that the election was “stolen.” Many of his followers believed him. This is the first time I can remember that a large bloc of people did not accept the results of an election.

It is obvious many people in this country do not trust the system, are willing to believe lies and misinformation and will turn to violence and to radical ideologies. That loss of confidence in American institutions is very dangerous for a democracy. Trump is not the only cause for the violence at the Capitol, but he certainly contributed to it. He should be held responsible through appropriate legal processes.

At the same time, our leaders need to rediscover our traditional system. We cannot solve our problems if we do not talk to each other. We need principled leaders who are pragmatic, skilled and experienced in the arts of negotiation, compromise and consensus building.

The world is watching. America is a beacon of freedom and a citadel of liberty and our friends and allies have been surprised and disappointed at the events of recent days. Our adversaries are persuaded our system is broken.

This is the challenge that is ahead of us: To use our democratic institutions and processes to make the country work better for all people. The insurrection at the Capitol was a dark moment in our history. But we should see it as an opportunity to revitalize our democracy. We have done this in years past, scores if not hundreds of times. We can do it again.