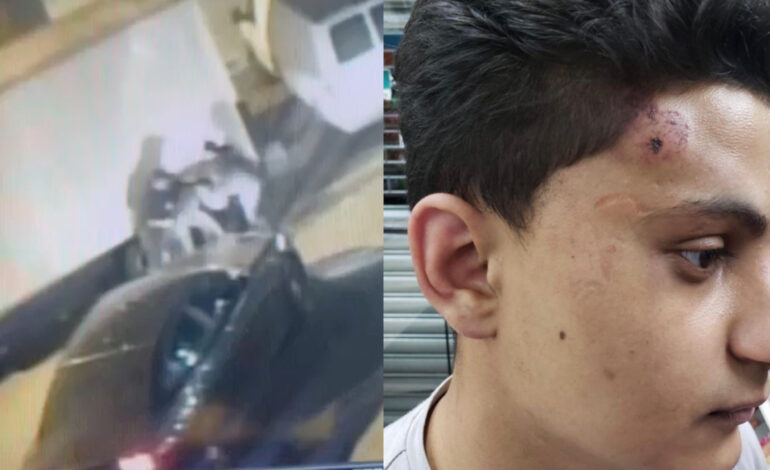 All photos courtesy of Osamah Alsaidi

NEW JERSEY — Arab American Osamah Alsaidi of Paterson, New Jersey is seeking justice after being brutalized by police officers in a seemingly unprovoked attack in December, when he was 19-years-old.

At least two officers are now under investigation for the violent incident that left Alsaidi with head trauma and a concussion. The investigation has been confirmed by state and local authorities. In a social media post, Alsaidi shared surveillance video and detailed the attack, which occurred just after midnight.

Alsaidi said he was walking to his car when two officers pulled up to him in their squad vehicle and and one began punching him for no reason. They beat Alsaidi bad enough for him to black out for a moment.

Alsaidi also said he was thrown to the ground and then arrested for “aggravated assault on a police officer, resisting arrest and disorderly conduct.” He was taken to the hospital by another officer who didn’t wait for his injuries to be treated before making staff discharge Alsaidi.

Alsaidi was attacked again by that officer while putting him in his car. Alsaidi had to check himself into a hospital after being released, where he was diagnosed with head trauma and a concussion.

The officers involved in the incident wrote a report claiming that they were investigating reports of a suspicious person in the area when Alsaidi approached them and became aggressive, “screaming profanities and acting belligerent, causing a disturbance.”

The report says the officers ignored Alsaidi at first, but he became more aggressive before assaulting one of the officers. Officers claimed the then 19-year-old struck a cop with a closed fist in the chest area, and that Alsaidi grabbed the officer’s vest and tried to remove his police radio from its pouch. The report says officers used a “compliance hold” prior to placing Alsaidi in handcuffs.

“The police report is false,” he said. “The video shows the truth; it shows what actually happened.”

The video shared by the teen does not show him attacking the officers. But a police source told local media that there was another, unreleased video that backs the officers’ claim. The officers were not wearing body cameras that night.

New Jersey authorities have not commented on the incident so far, but have acknowledged it is under investigation. Alsaidi said he has not seen justice after complaining to internal affairs two months ago.

“I was beaten up and arrested for no reason,” Alsaidi said. “I was 19 at the time and have no criminal record. I was humiliated and treated like an animal.”

The Paterson Police Department has been the subject of an FBI investigation into allegations of corruption and civil liberties violations, with eight arrests made so far, including a sergeant.

“The disturbing video shows two officers approach and beat the youth to the ground,” said CAIR-NJ Executive Director Selaedin Maksut. “The teen posed no visible threat to either officer and was not given an opportunity to comply with the officer’s orders — assuming any orders were even given… To see such a reprehensible attack happen at the hands of those who supposedly serve and protect Paterson residents is more than disheartening; it is revolting.”