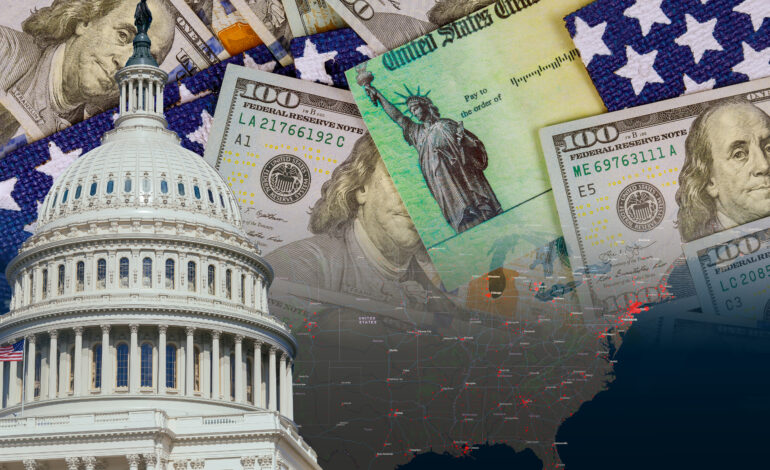 The House bill includes a minimum wage increase to $15, which will meet wide resistance from Republicans and will likely be stripped from the final bill in the Senate

WASHINGTON, D.C. – The Democratic controlled House passed a sweeping COVID-19 relief bill early Saturday, by a mostly party-line 219 to 212 vote, and sent it on to the Senate, where Democrats planned a legislative maneuver to allow them to pass it without the support of Republicans.

Democrats Kurt Schrader of Oregon and Jared Golden of Maine voted against the bill, which is dubbed the “American Rescue Plan”.

The bill includes $1,400 direct payments to Americans making less than $75,000 a year, a $400-per-week federal unemployment benefit through Aug. 29, and help for those in difficulty paying rents and home mortgages during the COVID-19 pandemic.

The bill also includes an increase in the child tax credit, direct funding to state and local governments, funding for schools and more money for vaccine distribution.

The legislative maneuver, called reconciliation, means no Republicans has to be on board with the final bill for the it to pass int the Senate. Vice President Kamala Harris can cast a tie-breaking vote in the chamber, which is split 50-50 between Republicans and Democrats and allies.

The bill would have raised the national hourly minimum wage for the first time since 2009 – to $15. But Senate’s rules expert said on Thursday that the wage hike did not qualify for that special treatment that allows the rest of the bill to be passed with a simple majority, rather than the 60 votes needed to advance most legislation in the 100-seat chamber.

Democratic House officials have vowed to approve the bill with or without the minimum wage increase, once it returns from the Senate.

Once the bill reaches the Senate, it will go through debate and some modifications before going back to the House, likely without the wage increase, for final approval. The bill will then be ready for President Biden to sign.

Democrats are rushing to send the bill to Biden’s desk by March 14, when jobless benefits are set to expire. This cannot be the last action we take in providing relief during this pandemic. We must provide recurring, $2k payments to every resident – U.S. Rep. Rashida Tlaib (D-Detroit)

U.S Rep. Rashida Tlaib (D-Detroit) said the path to providing essential relief to Americans during a pandemic is far from over, and that the government has to keep pushing every day to get more aid in people’s hands.

“We need members of the Senate, Senate Majority Leader Schumer, and Vice President Kamala Harris, in her role as the president of the Senate, to make sure provisions like the $15 minimum wage increase remain in this relief package,” Tlaib said. “Our people cannot wait any longer for this long overdue raise.

“We must also realize that this cannot be the last action we take in providing relief during this pandemic. We must provide recurring, $2k payments to every resident. There is strong bipartisan support for recurring direct payments across the country and our families will not be able to thrive during and after this pandemic without them.”

U.S. Senator Gary Peters (D-MI) applauded House passage of the bill on Saturday. He urged the Senate, which is scheduled to begin considering the package next week, to pass it swiftly.

“Whether it’s direct stimulus checks – ramping up vaccinations – or ensuring schools have the resources to safely re-open – the American Rescue Plan has the robust relief needed to help our state and country get through this pandemic,” Peters said. “The vast majority of Americans – as well as mayors, governors, business leaders and economic experts from across the political spectrum – support this bill, and I will work with my Senate colleagues to swiftly pass this package and send it to the President’s desk.”

The bill includes $25 billion for rental assistance, which is in addition to the $25 billion Peters helped secure in the latest round of relief enacted this past December, and includes programs similar to policies that Peters has supported, like $10 billion to support struggling homeowners, and $5 billion to support people experiencing homelessness.