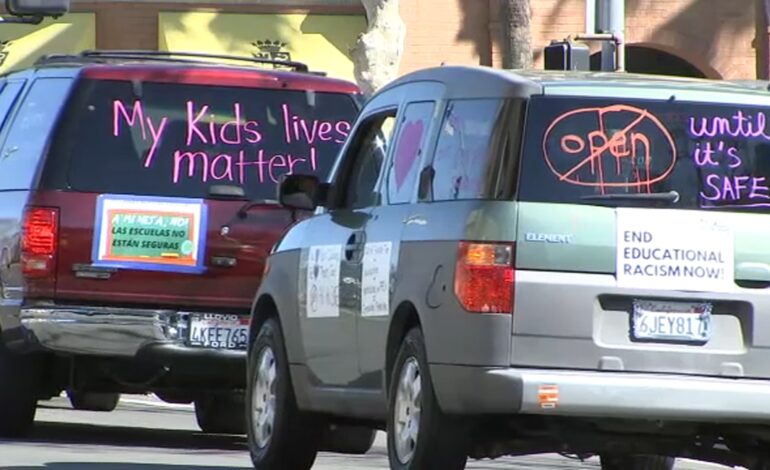 Studies show schools remain an important contributor to community spread of COVID-19, despite a push by Democrat officials to return to in-person learning

A study conducted in elementary schools in a Georgia school district shows mask use and social distancing are sometimes inadequate in controlling the spread of the virus in schools.

The Centers for Disease Control and Prevention (CDC) cited the study this week, just weeks after it said there was little evidence that schools were spreading COVID-19 infections in the country.

The study also shows teachers play an important role in the spread of the virus in schools.

The investigation showed transmission from teachers resulted in about half of 31 school-related cases.

The report found that students sat less than three feet apart and that lack of or inadequate mask use contributed to the spread in some cases. It also reported that students ate lunch in classrooms, which could have increased the spread.

The agency noted that the study was subject to some limitations, including difficulty in determining whether coronavirus transmission happened in school or out in the local community.

This is not the only study that shows the role schools play in the spread of the virus, even as the Biden administration and Democratic officials across the country pushed for a return to in-person learning despite protests from teachers and concerns by parents.

An earlier Wisconsin study widely publicized by the CDC was based on a very small district, much different from many of the densely populated urban districts in cities like Chicago and Los Angeles.

White House Press Secretary Jen Psaki acknowledged earlier this month that the Wisconsin study was based on small rural districts where all children wore three-layered cloth masks and were supervised by researchers. Psaki also admitted that study was “not reflective of every school district and community in the country.”

There are numerous studies that contradict the CDC and the Biden administration’s claims that teachers and students are safe to go back to face-to-face learning, and that schools closure is no longer a necessary tool to curb the spread of the disease.

A study published in the journal Science shows “Closing both schools and universities was consistently highly effective at reducing transmission at the advent of the pandemic” when combined with other restrictions on gatherings and activities.

A JAMA study published in July of last year found that statewide school closures in the first wave of the pandemic led to a decline in the incidence of COVID-19 of 62 percent per week, and that mortality saw a 58 percent decrease per week. We have to emphasize about the importance of really crushing transmission now, while we are rolling out these new vaccines – Dr. Katherine O’Brien, WHO

Experts also agree that continuing to fight down community spread while vaccines are rolled out is highly necessary to decrease risks of further, more dangerous variants.

“We have to emphasize about the importance of really crushing transmission now, while we are rolling out these new vaccines,” said Dr. Katherine O’Brien, director for Immunizations, Vaccines and Biologicals at the World Health Organization.

At a town hall in Milwaukee this month, Biden told a second grade student who was concerned she might catch the virus and possibly infect her parents, “You’re not likely to be able to be exposed to something and spread it to mommy or daddy.”

Even the CDC’s own guidelines have shown this to be untrue, much like a study done in two states in India, published in Science last November.

Another study, by doctors from Montreal and George Washington University, shows COVID-19 among school-age children is “an important determinant of the general level of infection in surrounding communities.”

In Chicago, as teachers demanded vaccinations before school reopening plans solidified earlier in February, Democratic Mayor Lori Lightfoot threatened teachers with lockouts from classrooms and pay, and told them their demands for a vaccine meant the elderly and homeless in the city, “would have to take a back seat to teachers who have been working remotely for 11 months.” We need to get the schools open so that parents … can get back to work – Brian Deese, White House economic advisor

American Federation of Teachers (AFT) President Randi Weingarten, who would not be exposed to the classrooms she wants reopened, has said teachers must return to classes despite “risks.” The comments were made as teachers the nation over faced uncertainty about vaccinations, many having to search for appointments themselves.

Democrats, like the Republican Party they once criticized for its back-to-school push, have made clear the primary reason for schools reopening, as admitted by Biden’s economic aide, Brian Deese, who told Reuters, “We need to get the schools open so that parents … can get back to work.”

It is clear the governments attempted to crack down on collective efforts by teachers to slow down or prevent a premature return to in-person learning, with the city of San Francisco filing a lawsuit against its own school district, and Los Angeles councilman proposing a resolution to file a similar lawsuit. In Chicago, the teacher’s union reached a deal with the city government behind closed doors, leaving many safety questions unanswered.

Parents have also shown concern over in recent days, as district geared up to issue back-to-school plans. Part of that concern is a real accounting of their government’s inability to provide support to parents tasked with creating a learning environment at home, and a lack of resources for working-class school districts both before and during the pandemic.

“What I think and hear from other parents in general is that going back to school is not safe,” Karla Franco, a parent and community leader in Southern California, said at a news briefing hosted by Ethnic Media Services earlier in the month. “The school district never protected our students or our campus, not even before the pandemic. I have asked the superintendent: if you cannot control what you see, how will you control this virus that you cannot see? All of us are in danger ”.

Franco express how besides teachers, parents also needed to be protected, who she thinks are often seen as “the enemy” for raising complaints and concerns to officials. When some schools opened up in the summertime, we had kids who came up positive…where are the checks and balances to make sure people are really socially distancing? – Bernita Bradley, Detroit parent

Bernita Bradley, a Detroit parent and the midwest delegate for the National Parents Union, pointed out the real divide in resources and tools for online learning available to low-income families, compared to affluent school districts in neighboring communities in her area.

“Socio-emotional support is not available in our schools,” Bradley said. “It never has been available, we have districts with one nurse covering about four different schools across the city, and yet the parents are expected to trust the school and just send their kids back into the buildings.”

In Detroit only 16 percent of students in third grade have required reading levels and 38 percent of households do not have an internet connection. With lack of resources, Bradley knows that online learning has not worked for students already vulnerable to under resourced learning environments. She also knows that those districts have given empty assurances to families prior to a return to in-person learning.

“When some schools opened up in the summertime, we had kids who came up positive (for the COVID-19 test),” Bradley said. “Where are the checks and balances to make sure people are really socially distancing? … The plan is that we all get vaccinated but our survey showed that only 55 percent of parents say they will.”