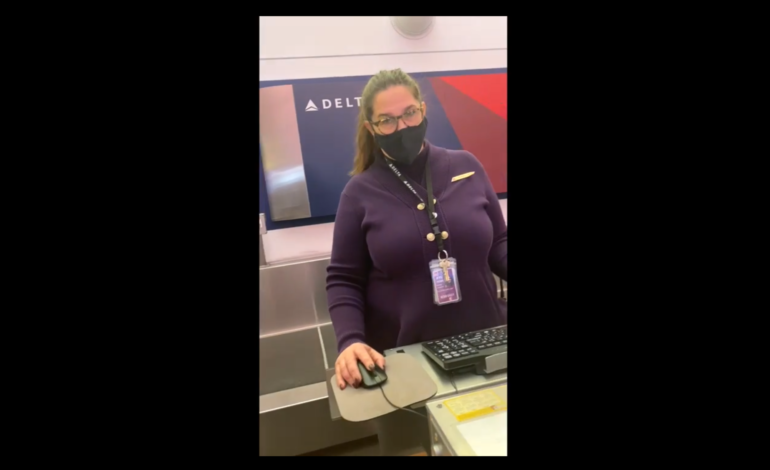 "There lots of people that — someone with your name might be on a no-fly list, and they have to go through extra precautions," the Delta employee told St. Louis native Abdallah Mohammed Eid. Screengrab of video via Facebook

ST. LOUIS, MO — The St. Louis Post-Dispatch reported this week an incident involving a Muslim man who says a Delta Air Lines employee told him he may have missed his flight at the city’s airport because he was flagged for his middle name.

Abdallah Mohammed Eid, 28, a St. Louis native, posted a video of his interaction with the employee who told him he may have been flagged for repeat check-in and security check because of his middle name. The extra scrutiny cause Eid to miss his flight back to his home in Washington on Valentine’s Day.

When Eid arrived at the airport at 5 a.m. for his 6 a.m. flight at the St. Louis Lambert International Airport, and got in front of the security line, a TSA agent scanned his ID and told him he had to go back upstairs to the Delta Air Lines check-in desk. A Delta employee issued him another boarding pass with the same information and seat numbers as his original ticket, but told him had to go through security again, the Post-Dispatch reported.

Even though TSA said they gave Eid a VIP pass so he could get through security quickly the second time, once he walked to his gate, an airline employee had already closed the gate.

Eid then shot the video of his interaction with an employee at the Delta check-in gate, where he asked why he was told to go back the first time to have his boarding pass re-printed, causing the delay.

In the video the employee tells Eid, “as soon as she put in your middle name, it… lots of times, sir…” Eid interrupts the employee to ask what the problem was with his middle name, to which she responds, “There’s nothing wrong, absolutely nothing wrong. There lots of people that — someone with your name might be on a no-fly list, and they have to go through extra precautions.”

I’m sharing my story to raise awareness because we have equal rights as Muslims, just as anyone else — Abdallah Mohammed Eid

Eid asks the employee behind the counter whether the name Mohammed is “a reason for you guys to send somebody back? Is that a legitimate reason?”

The employee insists she’s not sure of the reason why his name got flagged and that security did not inform her of the reason. She eventually calls the police.

Eid said in a social media post that police were professional. They escorted him to request a refund after reviewing the footage of the interaction with the Delta employee.

Eid said the employee’s explanation for why he was flagged to go back to check-in and security shocked and embarrassed him.

“I’ve never felt this kind of embarrassment and its safe to say it would be my last time flying with Delta,” he said. “I’m sharing this video to raise awareness because we have equal rights as Muslims, just as anyone else.”

As of Thursday, Eid was stilling waiting on the approved refund. He got a flight a few days after the incident through Southwest Airlines.

In a statement to the Post-Dispatch, Delta said it was looking into the matter and said it had zero tolerance for discriminatory conduct of any kind. A TSA spokesman said there was a name mismatch on Eid’s boarding pass, and that this wasn’t a “‘flying while Mohammed’ thing.”

But Eid said the name on his boarding pass is an exact match to the one on his ID. He also said the police officer checked his ID and boarding pass to make sure they matched.

The Council on American-Islamic Relations (CAIR) Missouri chapter is looking into the incident, which it says could be a case of “religious profiling of a Muslim passenger.”