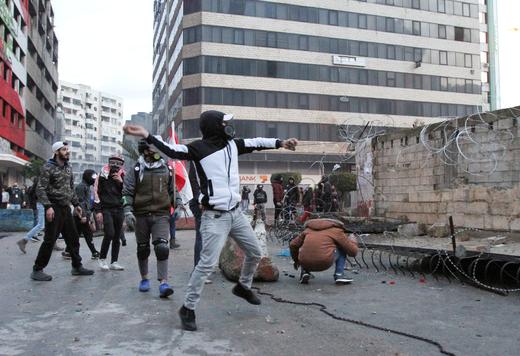 Demonstrators clash with security forces near the government Serail building, during a protest against the lockdown and worsening economic conditions, in Tripoli, March 10. Photo: Omar Ibrahim

BEIRUT — Growing resentment and outrage among the Lebanese led to eight days of protests this week, with protesters using burnt tires to block roadways across the country in anger over the nation’s economic meltdown and political deadlock amid a pandemic lockdown.

The Lebanese army said on Wednesday it had started clearing roadblocks eight days after protesters the subsided.

“As a result of the tragic accidents and violations that took place units of the army started this morning opening closed roads,” the Lebanese army said over Twitter.

Lebanese currency tumbled to a new low last week, sparking rage against the deepening economic crisis. The country’s financial crisis, which erupted in 2019, has wiped out jobs, locked people out of their bank deposits and raised the risk of widespread hunger.

Three people died in car accidents amidst the roadblocks on Monday, including two young men who died when they drove into a truck that was parked across a road to block traffic. Lebanon’s interior minister said on Wednesday the country’s security forces were drained and unable to fulfill their duties.

The situation was compounded after a port explosion in August devastated whole neighborhoods of Beirut, killing more than 200 people.