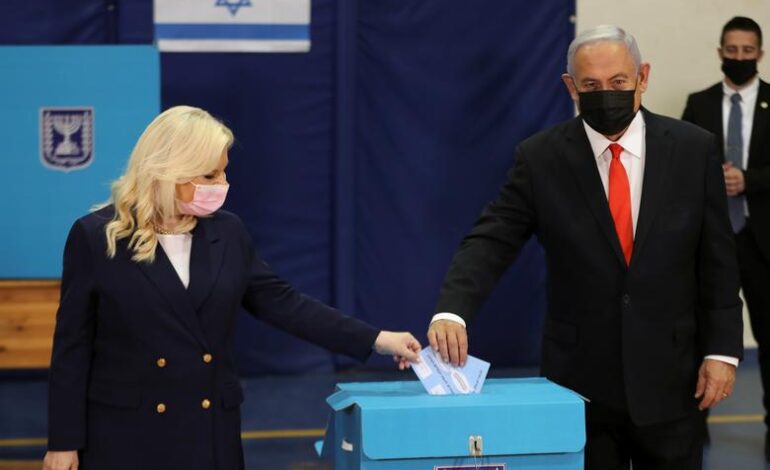 Israeli Prime Minister Benjamin Netanyahu’s prospects for another term looked uncertain on Wednesday after partial results from a national election projected no clear path to victory.

Not even his stewardship of Israel’s world-beating COVID-19 vaccination rollout — a central pillar of his campaign — proved enough for Netanyahu to break through the political deadlock that has seen four elections in two years.

With about 88 percent of votes counted it appeared that Netanyahu, 71, would have to cobble together a coalition from a combination of right-wing allies, ultra-Orthodox parties, ultra-nationalists, Arabs and defectors to secure another term.

Should a hard-right government emerge, it would likely be at loggerheads with the Democratic administration of U.S. President Biden over issues such as Palestinian statehood and U.S. engagement with Israel’s arch-enemy Iran over its nuclear program.

Some center-left parties made a better showing than expected after highlighting longstanding corruption allegations against Netanyahu — which he denies — and accusing him of mishandling the early months of the pandemic.

But like Netanyahu’s right-wing bloc, it fell short of a governing majority in the 120-member parliament. And it has a less clear route to forming a coalition, having to unite parties from different wings of the political spectrum.

Immediately after polls closed on Tuesday, Netanyahu claimed victory and said he hoped to form a “stable right-wing government.” But as first results trickled in and seemed to shift against him, he did not repeat the claim in his televised post-election speech.

One potential kingmaker is Naftali Bennett, 48, a former defense minister who favors annexing parts of the Israeli-occupied West Bank.

Bennett’s hawkish Yamina party is projected to win seven seats. He remained non-committal after the vote, saying only he would do “what is good for Israel.”

“It seems quite clear that Israelis are split right down the middle with respect to the main question that divides Israeli politics, which is pro and against Mr. Netanyahu,” he said.

“The period of uncertainty, deadlock and paralysis is expected to accompany us for the foreseeable future.”

Visting Tubas in the Israeli-occupied West Bank on Wednesday, Palestinian Prime Minister Mohammad Shtayyeh said the outcome “does not really give any hope for peace” and that the Israeli political system had shifted to the right.

“What is needed really from the future prime minister of Israel is somebody who is ready to stand up and say that he is ready to end occupation,” Shtayyeh told Reuters. “We have to break this status quo.”

Netanyahu has sealed historic deals with several Arab nations to normalize ties, but Israel and the Palestinians have not held direct negotiations since 2014, when peace talks broke down. Each side accuses the other of intransigence over core issues such as Jerusalem and Jewish settlements.