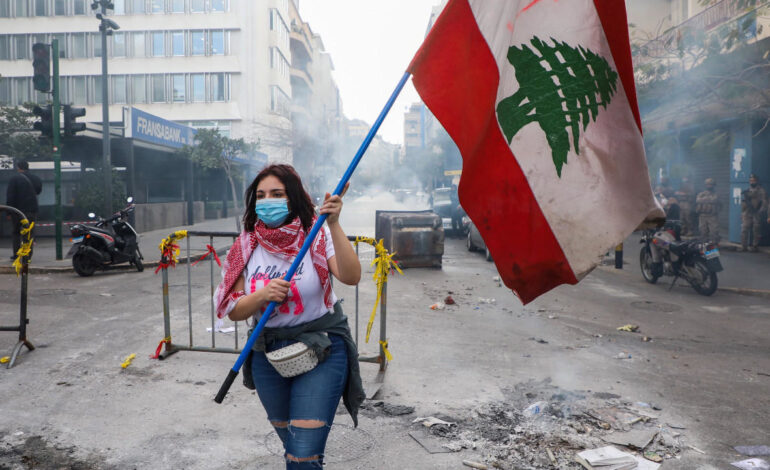 A demonstrator carries a national flag along a blocked road during a protest against the fall in Lebanese pound currency and mounting economic hardships, near the Central Bank building in Beirut, Lebanon, March 16. Photo: Mohamed Azakir

BEIRUT — Lebanon’s President Michel Aoun said on Wednesday the country could face chaos before it can recover from a financial meltdown.

Crushed under a mountain of debt and decades of graft, Lebanon has plunged into its worst crisis since the 1975-1990 civil war.

Aoun, a former army commander, and Saad al-Hariri, a three-time premier who was designated prime minister in October, have been locked in a standoff over the makeup of a new cabinet as the crisis worsens.

“I will hand over the country better than when it was handed to me… but I fear the cost will be very high, ‮)‬there‮(‬ may be chaos before that,” Aoun said in comments published by Lebanese television channel al-Jadeed. Aoun’s term expires next year.

The president, whose party is run by his son-in-law and leads the biggest Christian bloc in parliament, told a reporter at al-Jadeed he feared the dangers looming over Lebanon threatened its very existence.

The currency has lost most of its value, making more than half the population poor. Last August’s port blast, which devastated parts of Beirut and killed 200 people, deepened the country’s misery.

The deadlock has persisted since Aoun warned in September that the country was going “to hell” without a new government.

Foreign donors have made clear they will not bail out Lebanon before its leaders agree to a new cabinet that must launch reforms.

“I wish I inherited my grandfather’s orchard and didn’t take up the presidency,” Jadeed cited Aoun as saying on Wednesday.