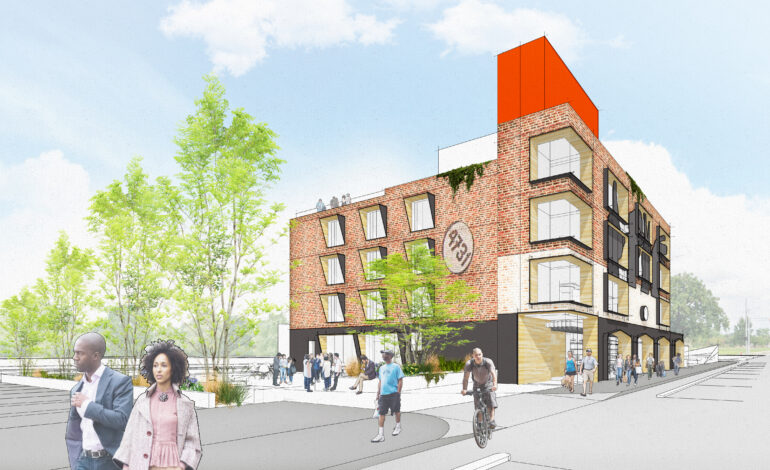 A rendering of the LOVE Building in Detroit, which will be home to Allied Media Projects (AMP), tenant partners and various Arab and SWANA projects currently supported by the organization. Image courtesy: Designing Justice + Designing Spaces

DETROIT — Allied Media Projects (AMP), a renowned Detroit organization that has strong ties with the region’s Arab arts and activism community, is gearing up to transition to a new collaborative space in the city.

AMP is best described as a network of people and projects that utilize media-based organizing towards it’s goal of advancing “a more just and creative world.”

The biennial Allied Media Conference has been a mainstay in the cultural and social justice sphere in Detroit and beyond, and a platform for the BIPOC and LGBTQ+ community to address, explore and educate on important issues.

With its mission of cultivating media for liberation, the organization has been around for two decades, the first seven years of those based in Bowling Green, Ohio. AMP’s new location, the LOVE Building, formerly known as 4731 Grand River, has long been a resource to Detroit’s creative community. AMP hopes to continue that legacy, but with a focus on supporting the art, organizing and cultural work being done by Black, Brown, Indigenous, queer, trans and disabled Detroiters.

“We’ve been based in a handful of locations since we moved to Detroit in 2006, but most recently we’ve been in Detroit’s Cass Corridor, in a building called the Furniture Factory,” AMP Co-Executive Director Jeanette Lee told The Arab American News. “That space is really where a lot of our work of our other primary program has been anchored. We’re the official sponsor for about 150 other media art and technology projects that are advancing social justice.”

That building has been a convening point for AMP’s Sponsored Projects Program. Half of those projects are based in Detroit and include area Arab artists.

“We’ve outgrown that space and began looking for a larger, more permanent one,” Lee said. “We’ve had to move a lot, because of the changing winds of real estate in the city over the past 10 years. That’s how we ended up with the LOVE building endeavor we are on now.” Through our work over the years, we’ve expanded to be more inclusive of other communities and BIPOC artists more broadly — Leila Abdelrazaq, Mammoul Press

“AMP provides an opportunity for a lot of projects to cross-pollinate,” said Leila Abdelrazaq, Mammoul Press co-founder and AMP development associate. “At Maamoul, we work mostly on publishing and distributing zines and comics. We started out with a SWANA (Southwest Asia and North African) focus, including South Asia, but through our work over the years, we’ve expanded to be more inclusive of other communities and BIPOC artists more broadly.”

Abdelrazaq said AMP’s network and sponsored projects aim to be inclusionary of the general ecosystem of creative work in the region, with projects like Maamoul and Habibi House providing support and mutual aid to that broader community.

AMP’s relationship with Arab artists goes back to its earliest days.

“Members of an early 2000s Arab arts collective were foundational for AMP’s transition to Detroit,” Lee said. “We were the temporary home for an incredible mural, created under the leadership of Mohamad Bazzi, about Arab migration to the country.”

Though moving to a new space was a necessity, as rising rents and property value continue to displace many in the AMP’s current neighborhood, the organization is particularly aware of the concerns its new neighbors and the existing artistic community that previously utilized the Grand River building.

AMP and its partners are voluntarily undergoing a Community Benefits Agreement (CBA) and have assembled a Neighborhood Advisory Council to ensure the programs and services offered through the LOVE Building are of benefit to the surrounding area.

AMP seeks to reimagine the LOVE Building as a space to convene and collaborate towards the mutual benefit of the real people involved in the creative and social justice activity on the property.

The building is centrally located, accessible and beautiful and AMP wants to center the surrounding community’s needs in step with the building’s legacy. The tenant partners have worked to include the desires of long-time residents in the development process and honor the historical context of the neighborhood. The original Our Land Till Death Mural. Photo: Erik Howard

A mural by renowned Detroit street artist Sintex on a neighboring building that had to be demolished will be recommissioned for the LOVE Building campus. The mural honors lives lost to police and racist violence in Detroit. Keeping with the theme of memorializing ancestors, the new mural will incorporate additional people of significance to the local artist-activist community.

“We’re really aspiring for this development to model a more equitable and accountable relationship to the place we’re going to be calling home,” Lee said.