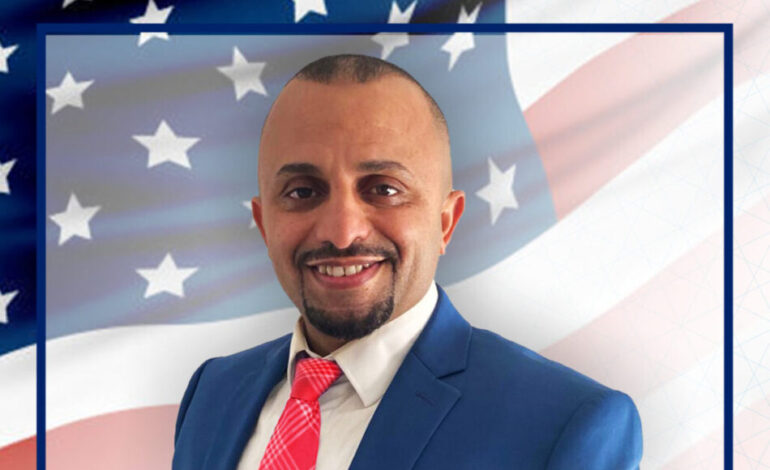 DEARBORN— In late February, Khalil Othman was among the first of 19 candidates to announce his bid for a seat on the Dearborn City Council.

“I can best serve the Council because I come from a problem-solver mindset and experience,” Othman said. “Every single issue we have here, I will be advocating for as a core principle I believe in.

“I have been very involved in the community for over 16 years, volunteering and serving as a board member for multiple community organizations. My background experience is in the information technology industry. I have an innovation mindset and want to bring that same mentality, passion and approach to serving our community on the Council.”

An active resident, Othman has been living in Dearborn with his wife and five children for 17 years.

After receiving his Master of Science degree in information technology (cyber security) from the University of Detroit Mercy, Othman began working as a cyber security manager for Stellanis (formerly known as Fiat Chrysler Automobiles).

“In my professional capacity, I’ve successfully led numerous projects, which resulted in millions of dollars in cost savings,” Othman said. “While serving on Council, I will implement similar planning that is supported by complete assessment and analysis to come up with solutions that will benefit all the residents.”

For two years, Othman served as a commissioner at the Dearborn Recreation and Parks Commission, overseeing budgets and investments of public projects for the community.

Walid Fidama is a longtime resident and a supporter of Othman’s candidacy.

“I met him (Othman) 16 years ago while we were serving as members of the National Associations of Yemeni Americans (NAYA)” Fidama said. “He is very dedicated to the community, including youth mentorship in the Yemeni American Indoor Soccer League for many years. He has helped kids stay off the street and drugs to focus on their education and future.”

Some of my top priorities are related to public health and safety, also the city’s higher property taxes and water bills compared to neighboring cities – Khalil Othman

“I know Khalil through our joint efforts in civic engagement,” said Faye Nemer, a local resident. “He has been an integral member of the community in expecting accountability and transparency from elected and appointed city officials.”

Regarding increasing community concerns on police reform and misconduct, Othman stated he supports the difficult job of the men and women in uniform and thanks them for their services.

“At the same time,” Othman said, “I am here to hold them accountable in any cases of excessive force or abuse of power. We need to look at the data, types of training and preparedness plans of the city and police department. We need to find ways to bridge the gap between the community and the police.”

As a Yemeni American, Othman is motivated to close the gap in the lack of equal representation in positions of public office and administration.

“There are issues that have not been adequately addressed, like the environmental pollution and unfair city ordinances that impact many Southend and eastside (Dearborn) residents that have not been heard. I am committed to creating positive change.”