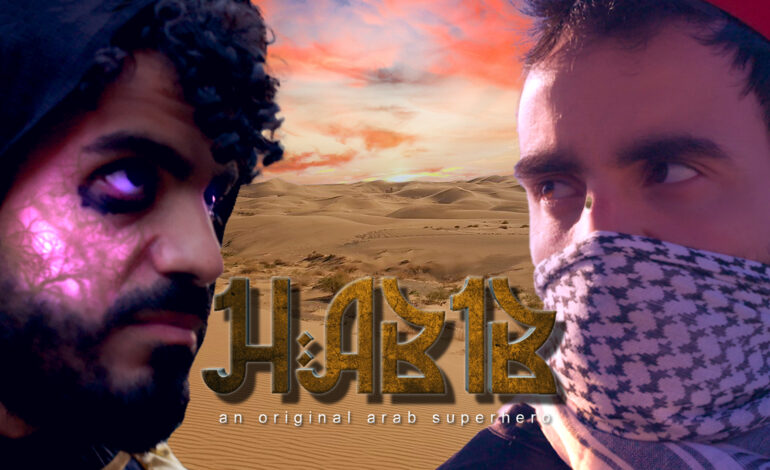 All photos courtesy of Wishful Genies

TORONTO — When Arab Canadian duo Rob Michaels and Fady Ghali noticed a lack of representation of Arabs in the superhero films, they decided to do what they do best: Create a comedic sketch. Michaels and Ghali have been creating amusing sketches for their Wishful Genies YouTube and social media pages for adoring audiences for some time. Their latest sketch is a comedic twist on the genre of the big budget Hollywood superhero film, but created as a trailer for a would-be movie that features Marvel’s first ever Arab superhero.

The sketch appears on YouTube under the title Habib — Marvel’s First Arab Superhero — OFFICIAL TRAILER HD, a play on the popularity of fresh trailers for upcoming, highly anticipated blockbuster movies.

The sketch plays with both cultural norms of Arab immigrant families and the negative stereotypes they struggle against. The trailer establishes Habib, played by Michaels, as the child of immigrants whose “parents fled from the land they called home,” to bring him somewhere safe, “where I could grow up to live a normal life”; a common aspect of immigrant life in Canada and the U.S.

“The reason we made it a trailer was because we didn’t plan to make it a proof of concept,” Michaels, who is Iraqi Canadian, told The Arab American News. “There were so many ideas that were kind of all over the place, we figured it would be a lot to shoehorn into just one sketch based in a singular setting.” Michaels and Ghali pack a lot in the video’s three minute, 16 second length to bring up the complexity of immigrant identities. Habib uses actual cultural objects like khubz (bread) to stop crime, wields a traditional sword, wears a keffiyeh and tarboosh (fez). But his superpowers don’t impress his immigrant parents, who are more worried about his college prospects than his plans to save the world.

“I was speaking to a friend of ours, Jonathan Shaboo, who plays the uncle in the trailer,” Michaels said. “He’s another Iraqi actor, the only one that we know.

“We were having a conversation about representation in the industry and talked about Marvel and how there aren’t any Arab superheroes and half-jokingly said, ‘we should make our own Arab superhero.’ I laughed and totally dismissed him, since we don’t have the budget and resources to make an actual superhero.”

But Michaels gave the idea some thought and spoke with Ghali, who expressed his own interest in creating an Arab superhero sketch. Ghali plays Habib’s supervillain nemesis, Wahish.

A funny bit has Habib explaining he’s a superhero who saves lives to his parents, who wonder if he has plans for an actual career and college degree if the superhero gig doesn’t work out. Another has him showing up late to a meeting with other superheroes and wondering why everyone had left, a play on the what some in the community call “Arab time”, where time commitments between acquaintances are expected to be flexible.

I thought, if I did somehow manage to become a superhero I bet my parents still wouldn’t be impressed; they’d still prefer I had a degree — Rob Michaels

An amusing realization came to Michael while initially planning the sketch idea.

“I thought, if I did somehow manage to become a superhero I bet my parents still wouldn’t be impressed; they’d still prefer I had a degree,” he recalled, laughingly.

Ghali and Michaels are no stranger to family expectations when it comes to professional careers. Both switched from more traditional paths after college to explore their interest in the arts, with training at the renowned Second City. Their shorts have now been screened in numerous festivals across North America and have been seen by millions through features on Funny Or Die, 9GAG, CBC Comedy, BlogTO and Al Jazeera.

Habib also unfortunately encountered a number of racist comments on Tik Tok and the duo know “how important it is to bring this story forward and normalize Arab representation in the media.”

“Given everything over the last few years, both our families have been a lot more open and on board,” said Egyptian Candian Ghali. “A big part of the reason my parents loosened up about my (artistic pursuit) was because they saw how much I busted my butt to make it happen and how much work I put into it. They realized it wasn’t about being famous and that I appreciated the act of acting and performing. It’s a lot of work and you deal with rejection on a daily basis in this industry.”

Ghali spoke of the large Arab community in Toronto.

With Habib, the two wanted to have some fun with Arab culture, while highlighting the strong sense of family and community that exists within it.

“We thoughts since we had only seen Arabs negatively portrayed, let’s show what a regular Arab family has to say,” Michaels said. “Sure they have their flaws of caring too much about college degrees, and we wanted to be able to poke some fun at that, but here’s some positive representation, here’s some fun that we’re having with what it is to be Arab.”