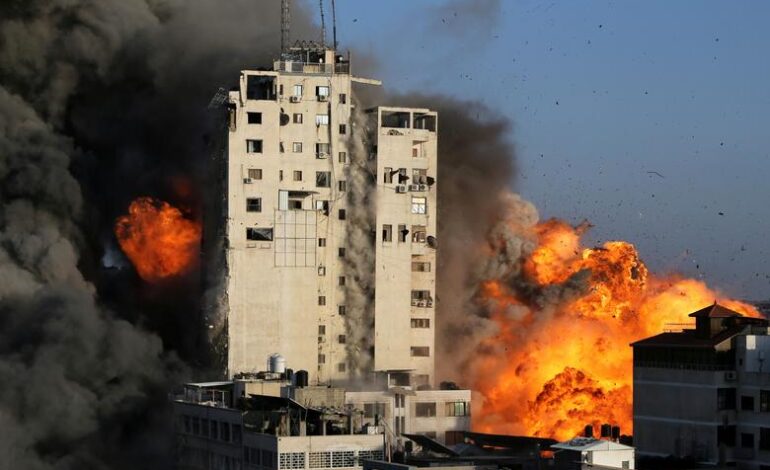 Smoke and flames rise from a tower building as it is destroyed by Israeli air strikes in Gaza City, May 12. Photo: Ibraheem Abu Mustafa/Reuters

PALESTINE — Israel’s assault on Gaza continued on Wednesday, leveling a third high rise, the 16-story al-Shorouk tower, which housed local and foreign media outlets as well as shops and apartments.

Israeli authorities said Hamas members were using each of the three buildings it has so far targeted for military purposes, though official the Palestinian news agency Wafa said that there was no clear reason given for bombing of high rises “other than inflicting damage and hurting the population.”

As of Wednesday night (U.S. Eastern Time) the Palestinian Health Ministry said the number of Palestinians killed as a result of the Israeli bombing of Gaza increased to 76, including 17 children and six women. More than 300 Palestinians have been wounded.

Seven people in Israel have been killed by rockets fired from Gaza, including a 6-year-old and a soldier, AFP reported.

The Middle East Eye reported that Hamas has continued to bombard Israel with rockets, most of which are knocked out of the sky by Israel’s advanced Iron Dome anti-missile system. Three Jewish Israelis and two Palestinian citizens of Israel, one of whom was a child, have been killed by the Hamas missiles in recent days.

Palestinian citizens and residents of Israel have also faced mobs of far-right Israelis who have attacked businesses and people, with ultra-nationalists targeting Palestinian interests in the nearby cities of Lod (known to Palestinians as Lydd) and Bat-Yam. Extremists also attacked Palestinians in the cities of Haifa, Jaffa, Al-Lud, Tiberias and Tel Aviv.

Far-right mobs also attacked the Great Omari Mosque in Lydd. Israel announced a night time curfew and a state of emergency as violence continues to spiral. Israeli Prime Minister Benjamin Netanyahu said Israel will use “an iron fist if needed” to stop protests by its Palestinian citizens in Israel. A Palestinian man, Moussa Hassona, was killed by police in the Israeli city on Monday, Arab48 cited local sources as saying the protester was shot dead by an Israeli ultra-nationalist.

The Israeli army announced that it had killed Hassan Kaogi, head of the Hamas military intelligence security department, and his deputy, Wail Issa, head of Hamas’ military intelligence counterespionage department. The Hamas movement also confirmed the death of its Gaza City commander, Bassem Issa, reportedly the highest-ranking military figure in Hamas to be killed by Israel since its 2014 offensive on the enclave.

U.S. Secretary of State Antony Blinken reaffirmed Israel’s “right to defend itself” in a call with Netanyahu, but also cited “Palestinians need to be able to live in safety and security” and asked for deescalation. The PM of Israel Twitter page did not mention Blinken’s comments on Palestinian right to safety when tweeting about the call.

Blinken said he would send U.S. envoy Hady Amr, the deputy assistant secretary of state, to the region immediately, in order to meet with Israeli and Palestinian leaders.

Earlier on Wednesday, White House press secretary Jen Psaki said that the administration is intensifying efforts in private to de-escalate the situation, and that U.S. officials had conducted more than 25 high-level calls with regional states.

On Tuesday, U.S. National Security Advisor Jake Sullivan conveyed President Biden’s “unwavering” support for Israel’s “right to defend itself” in a call with his Israeli counterpart. The administration “condemned the ongoing rocket attacks by Hamas and other terrorist groups, including against Jerusalem and Tel Aviv,” said a statement describing the call. Sullivan also conveyed the U.S.’ “encouragement of steps toward restoring a sustainable calm.”

But on Wednesday, Biden himself told reporters that he spoke with Netanyahu.

“My expectation and hope is that this will be closing down sooner than later, but Israel has a right to defend itself when you have thousands of rockets flying into your territory,” Biden said.

This prompted U.S. Rep. Alexandria Ocasio-Cortez (D-NY) to criticize Biden for not acknowledging the role of Israel in escalating the violence, namely its numerous attacks on the Al-Aqsa mosque compound in Jerusalem over the last week and the forced expulsion of Palestinians from their homes in occupied East Jerusalem.

“By only stepping in to name Hamas’ actions — which are condemnable — & refusing to acknowledge the rights of Palestinians, Biden reinforces the false idea that Palestinians instigated this cycle of violence,” Ocasio-Cortez said in Twitter thread. “This is not neutral language. It takes a side — the side of occupation.”

Blanket statements like these w/ little context or acknowledgement of what precipitated this cycle of violence – namely, the expulsions of Palestinians and attacks on Al Aqsa – dehumanize Palestinians & imply the US will look the other way at human rights violations. It’s wrong. https://t.co/afCgoGdiMG

Israeli airstrikes are part of an escalation growing out of its crackdown on unarmed protest over the potential expropriations of Palestinian homes in occupied East Jerusalem in the Sheikh Jarrah neighborhood, followed by Israeli troops violently attacking the al-Aqsa mosque multiple times during Ramadan congregations.

Jerusalem had been the site of tensions for weeks over Israel’s restrictions on Palestinian access to parts of the Old City during Ramadan and the eminent removal of Palestinians from their homes in a campaign of ethnic cleansing to make way for Jewish settlers.

By Tuesday night, Israeli security forces had raided the holy site four times in five days, leaving hundreds of people injured. Many believe the earlier attacks on the mosque were to clear the way for Israeli nationalists to celebrate Jerusalem day, the day Israel occupied the Old City and East Jerusalem. This culminated in a series of deadly rocket exchanges between the Israel military and Hamas in Gaza, after Hamas issued a warning to Israel that if it didn’t clear the mosque by Monday evening, it would launch rockets at Jerusalem.