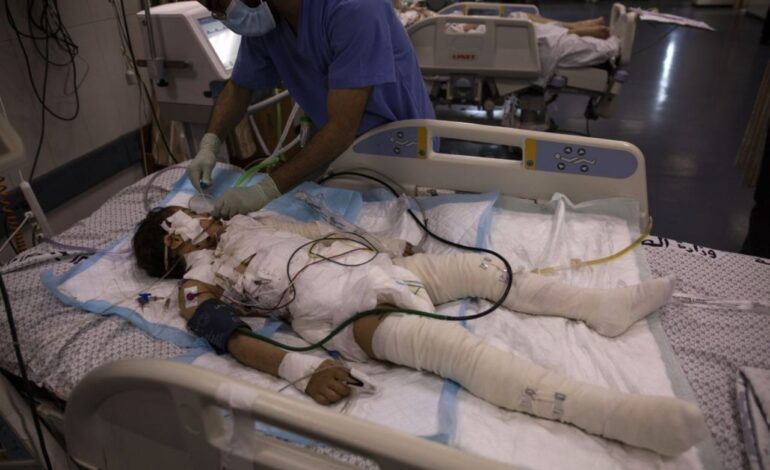 A Palestinian medic gives treatment to a wounded girl in the ICU of the Shifa hospital, Thursday, May 13, in Gaza City. She was injured by a May 12 Israeli strike that hit her family house. Photo: Khalil Hamra/AP

GAZA — Israel’s violent assault on Gaza continued into Friday, with the reports confirming Israel’s airstrikes had killed at least 115 killed, including 27 children, 11 women and wounding over 600. More bodies remain trapped under the rubble.

The U.N. Relief and Works Agency (UNRWA), which has responsibility for the welfare of Palestinian refugees, said four of its buildings, including schools, have been hit by Israeli bombardment. Smoke and flames rise during Israeli air strikes amid a flare-up of Israeli-Palestinian violence, in Gaza, May 12. Photo: Ibraheem Abu Mustafa/Reuters

At least three rockets were fired from south Lebanon towards Israel late on Thursday, apparently from launched from Basateen al-Qulayla, a coastal area near al-Qulayla village, near the Palestinian refugee camp of al-Rashidiya, outside the city of Tyre. A Lebanese source told the Middle East Eye it was not immediately clear who was behind the rockets, adding that no one has been detained.

President Biden, who has been reaffirming for days what he calls Israel’s “right to defend itself” against disproportionately less rocket fire from Hamas in Gaza, said he did not think Israel’s heavy bombardment was “a significant over-reaction.” As of Thursday, seven people have been killed in Israel.

Israeli authorities ordered a second curfew in Lod, where Israeli ultra-nationalists have been attacking Palestinian citizens of Israel since the violence intensified last weekend, in lynch mobs and home invasions, some caught on tape, with Palestinians setting fire to Jewish-Israeli owned businesses. Palestinians and Israeli far-right mobs fought in cities across Israel, with Israeli police making arrests. The brother of Palestinian man named Ahmed Al-Shenbari, who was killed amid a flare-up of Israeli-Palestinian violence, reacts as mourners carry his body during his funeral in the northern Gaza Strip, May 11. Photo: Mohammed Salem/Reuters

The Israeli army retracted its earlier announcement that its troops had entered the Gaza Strip, blaming the confusion on an “internal communication” problem.

Media agencies said groups of settlers attacked residents of Sheikh Jarrah in occupied East Jerusalem, the neighborhood where Palestinians face expulsion from their homes, an issue central to the events of the last week, while heavily armed police patrolled the area.

U.S. Secretary of State Antony Blinken said on Thursday that Washington is intensifying diplomatic efforts to end the violence across Israel and the Palestinian territories, while reaffirming America’s support for what he called “Israel’s right to defend itself.” Palestinian families are pictured in a street after evacuating their homes east of Gaza City on May 13, on Eid Al-Fitr, due to heavy shelling by the Israeli military. Photo: AFP

“The Cabinet calls on Israel to stop the barbaric attacks on Palestinians and commit itself to international efforts aimed at reviving a political process,” the body said in a statement on Thursday.

20 Palestinians, including nine children, killed by Israeli air strikes in Gaza, amid days of violence