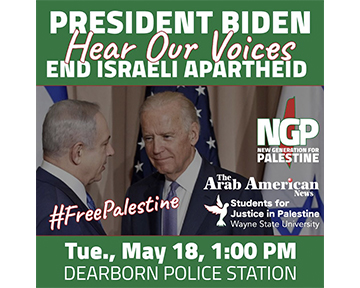 DEARBORN – President Biden is expected to visit the Ford’s new Rouge Electric Vehicle Center in Dearborn on Tuesday, May 18, with a possible reception and speech planned to begin around 1:30 p.m. This visit comes as Biden has repeatedly expressed his unwavering support for Israel, whose government is currently bombarding families in Gaza. The death toll has surpassed 200, including 61 children, many still trapped under rubble from destroyed buildings.

Meanwhile the U.S. has blocked U.N. Security Council resolutions for a ceasefire three times. Instead of expressly condemning this murder of Palestinian civilians by Israel’s powerful military, Biden and his administration have repeatedly made statements about Israel’s “right to defend itself” from retaliatory rockets from Hamas. They have refused to say that Palestinians have the same right to defend themselves.

There has also been no real acknowledgement from the administration of the events that have led to the current situation. These include Israel’s continued illegal settlement operations, crackdowns on subsequent protests against removal of Palestinians from their homes in occupied East Jerusalem and multiple sieges of the Al-Aqsa mosque during Ramadan. All this happened before Hamas shot its first rocket.

The world also learned on Monday that the Biden administration approved $735 million in weapons sales to Israel, raising questions by members of the U.S. Congress, as the carnage of innocent Palestinians continue. Israel has claimed it is attacking Hamas and other combatant sites, offering no proof of their presence in the residential and commercial buildings it has leveled, including a tower housing international media.

The Arab American community is outraged over this callousness, During his campaign, Biden said Israel’s settlement and annexation plans were a roadblock to peace in the region. That was when former President Trump was exercising the same kind of support for Benjamin Netanyahu’s right-wing government it is receiving from the White House now. It was also the same time the Democratic Party was looking for valuable votes from the Arab community. Furthermore, Biden made a campaign promise that his foreign policy will be based on human rights, a promise that has been shattered as he has supported Israeli war crimes and ethnic cleansing policies against Palestinians.

The Arab American News, New Generation for Palestine (NGP) and Students for Justice in Palestine at Wayne State University are organizing a rally at the Dearborn Police Department at 1 p.m. on Tuesday, with possible continued protest action to be determined at the event.

From the organizers: “We simply can’t remain silent. Join us. Bring your family, your neighbors and your friends.” Abdullah Hammoud talks of his interaction with Biden in Dearborn, handing him letter on Palestine