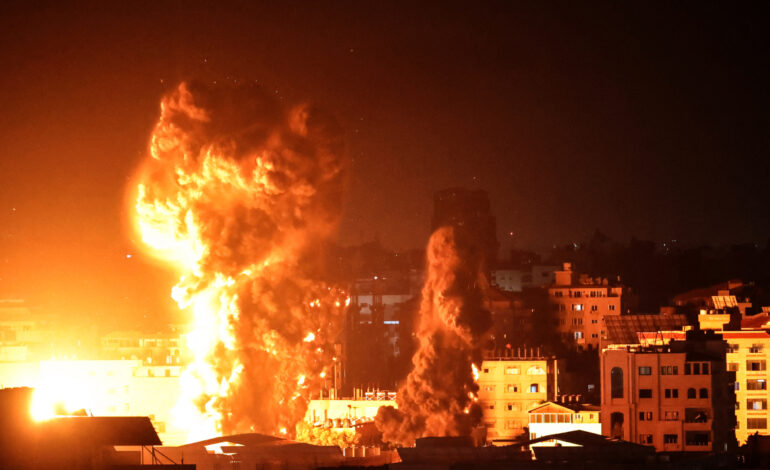 PALESTINE — As Israel continued its assault on Gaza, with at least 220 Palestinians killed, including 59 children, and more than 1,300 wounded by Monday tallies, U.S. Secretary of State Antony Blinken said he had personally not seen evidence for Israel’s claim that Hamas was present at a building used by international media it destroyed on Saturday.

On Monday, Blinken said he personally has not seen any evidence that Hamas was operating from the Al-Jalaa building in Gaza City. The building housed employees for The Associated Press (AP), Al Jazeera and other media outlets.

Speaking in Copenhagen, Blinken said he has asked Israel for evidence to back its claim that Hamas was operating in the building, The Hill reported on Monday. He said that he personally has “not seen any information provided.”

The U.S. has so far blocked a proposed U.N. Security Council statement on Israel’s military assault on Gaza.

When pressed on whether Israel showed proof of the Hamas presence in the building to the U.S., Israeli Prime Minister Benjamin Netanyahu told CBS’ John Dickerson on Sunday that, “Well, we share with our American friends all that intelligence.”

“It’s inconceivable you would have talked to (Biden) and not shared proof of Hamas in those buildings that housed the journalists. Did you share that with him?” Dickerson asked, to which Netanyahu responded, “Well, we pass it through the intelligence services to our people, to those people.”

Journalists from the outlets, including The Middle East Eye (MEE) were forced to evacuate the building an hour before the strike by the Israeli military and were denied the chance to save their media equipment. Palestinian rescuers pull a survivor from under the rubble of a destroyed residential building following deadly Israeli airstrikes in Gaza City, Sunday, May 16. Photo: Khalil Hamra/AP

“This bombing is yet another attempt by Israel to dominate the narrative by excluding factual reporting of their air strikes on Gaza,” MEE said in a statement. “There is now mounting evidence that civilian towers with no military usage or record of involvement are being targeted by the Israeli air force.”

The Biden administration is yet to condemn the overwhelming death toll among Palestinians in the bombing campaign that has now entered into its second week. It has instead continued to stress Israel’s right to “self defense.” International protests have seen tens of thousands of people according to one tally, that have demanded an end to Israel’s genocidal campaign and its forced expulsion activities in Palestinian neighborhoods, especially Sheikh Jarrah.

Videos and photos of Palestinian children being removed from under the rubble of buildings indiscriminately destroyed by Israel have been circulated widely across social media. An airstrike flattened three buildings in Gaza and killed at least 26 people Sunday, medics said, making it the deadliest single attack since the assault began last week.

In cities and towns across the occupied West Bank and Israel, Israeli forces continue to violently crack down on daily Palestinian protests against the planned expulsion of Palestinians from their homes in Sheikh Jarrah and and attacks on the al-Aqsa mosque during the holy month of Ramadan. Hamas began firing rockets at Israel after warning Israeli forces to end their siege of the Al-Aqsa mosque last Monday. A Palestinian girl, Suzy Eshkuntana, 6, is treated by a medic at a hospital after being pulled from the rubble of a building amidst Israeli air strikes in Gaza City, May 16. Photo: Mohammed Salem/Reuters

At least 10 Israelis, including two children, have been killed in rocket attacks from Gaza, according to Al Jazeera.

The Washington Post reported that the Biden administration approved a $735 million weapons sale to Israel, raising questions by the U.S. Congress.

“Allowing this proposed sale of smart bombs to go through without putting pressure on Israel to agree to a ceasefire will only enable further carnage,” a legislator on the House Foreign Affairs Committee told the newspaper.

According to U.S. law, the administration is required to notify Congress of such sales. Legislators then have 20 days to pass a resolution opposing the sales.

A spokesperson for the House Foreign Affairs Committee told the Post that Congress was notified on May 5 of the commercial deal in which Boeing will provide the weapons to Israel. But a Democratic aide said “We’re lucky to catch this weapons sale” and that “there’s zero transparency on the House Foreign Affairs Committee and sensitive deals are regularly approved without scrutiny.”

Seventeen Palestinians have been killed by Israeli gunfire in the West Bank between May 10-16, according to the U.N.’s Office for the Coordination of Humanitarian Affairs (OCHA), as demonstrations over Israel’s onslaught on Gaza and aggressions in Jerusalem have continued across the occupied territory.

The Palestinian Authority (PA) Ministry of Health has documented the killing of 21 Palestinians in the West Bank since 7 May, along with 3,728 wounded, according to a statement on Monday, as reported by MEE. The ministry noted that at least 441 of the injuries it has documented were the result of live ammunition.