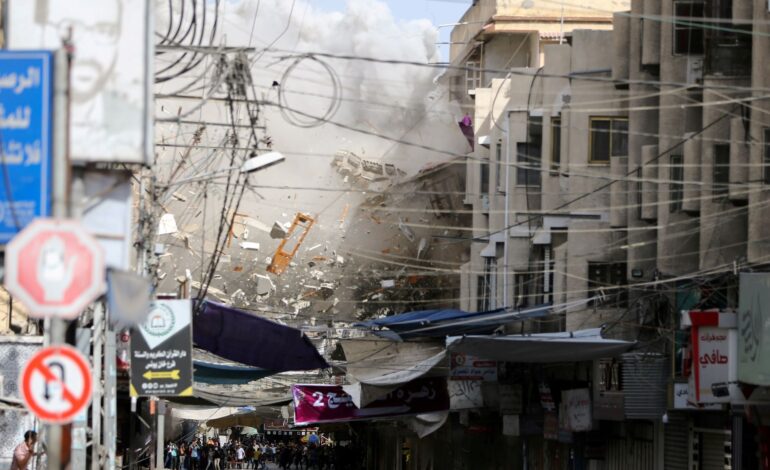 Israel and Hamas announced a ceasefire across the Gaza Strip border as of Friday, the Palestinian Islamist faction and Egyptian state TV said, bringing a potentially tenuous halt to the fiercest fighting in years.

Israeli Prime Minister Benjamin Netanyahu’s office said his security cabinet had voted unanimously in favor of a “mutual and unconditional” Gaza truce proposed by Egypt, but added that the hour of implementation had yet to be agreed.

Hamas and Egypt said the truce would begin at 2 a.m. (2300 GMT) Friday, after 11 days of destruction by powerful Israel airstrikes that have killed some 230 Palestinians by Thursday’s numbers, including 65 children and 39 women. Israeli attacks damaged at least 18 hospitals, clinics, 40 schools and destroyed one health facility, according to the World Health Organization.

12 Israelis, including two children, have died since the exchanges began on May 10.

Within minutes of the announcements, in the countdown to the ceasefire, the sides were trading blows again. Sirens warned of incoming rockets in Israeli border communities and a Reuters reporter heard an air strike in Gaza.

Amid growing global alarm at the bloodshed, President Biden urged Netanyahu on Wednesday to seek de-escalation, while Egypt, Qatar and the U.N. sought to mediate. Biden was due to deliver remarks on Thursday.

Hamas said the ceasefire would be “mutual and simultaneous.”

“The Palestinian resistance will abide by this agreement as long as the occupation (Israel) does the same,” Taher Al-Nono, media adviser to Hamas chief Ismail Haniyeh, told Reuters.

In a televised speech Abu Ubaida, spokesman for the Hamas group, said, “With the help of God, we were able to humiliate the enemy, its fragile entity and its savage army.”

A senior Israeli official has pushed back on a claim made by Hamas that it received “guarantees” that “Israeli aggression” would stop at the al-Aqsa Mosque and in the East Jerusalem neighborhood of Sheikh Jarrah, an AXIOS news outlet contributor said Thursday.

On Wednesday, Democratic U.S. lawmakers introduced a resolution seeking to block a $735 million sale of precision-guided weapons to Israel, in a response to continuing devastating attacks on Palestinians by Israeli forces.

U.S. Reps. Alexandria Ocasio-Cortez (D-NY), Mark Pocan (D-WI) and Rashida Tlaib (D-Detroit) were lead sponsors of the measure, which has at least six other co-sponsors, including other progressive Democrats in the House.

They have been among lawmakers calling for a more concerted U.S. effort to end U.S.-backed and financed military assaults on Palestinians, along with expropriations of Palestinians from their homes, through forced removal and demolition, and repression of resistance from occupied Palestinians.

The resolution is unlikely to progress further in the House, where the office of Speaker Nancy Pelosi controls which legislation comes up for a vote. The chamber’s leaders have expressed support for the sale, with No. 2 Democrat Steny Hoyer telling reporters on Wednesday he backed it.

The Biden administration approved the potential sale of $735 million in weapons to Israel earlier this year and sent it to the U.S. Congress for formal review on May 5, giving lawmakers 15 days to object under laws governing foreign weapons sales.

“At a time when so many, including President Biden, support a ceasefire, we should not be sending ‘direct attack’ weaponry to Prime Minister Netanyahu to prolong this violence,” Ocasio-Cortez said in a statement.

On Thursday, U.S. Senator Bernie Sanders (I-VT) introduced a resolution that would halt a major arms sale to Israel amid its bombing of Gaza and the deaths of many Palestinian civilians, including 65 children, a high-profile illustration of the significant divide in the Democratic Party, with some members breaking with the historic lock-step support of Israel by Washington lawmakers of every stripe.

“At a moment when U.S.-made bombs are devastating Gaza, and killing women and children, we cannot simply let another huge arms sale go through without even a Congressional debate,” Sanders said in a statement about his bill that would stop the arms package. “I believe that the United States must help lead the way to a peaceful and prosperous future for both Israelis and Palestinians. We need to take a hard look at whether the sale of these weapons is actually helping do that, or whether it is simply fueling conflict.”

Under Senate rules, the measure cannot be filibustered and empowers Sanders to force a full floor vote in roughly a week’s time once it has been filed with the Foreign Relations Committee.