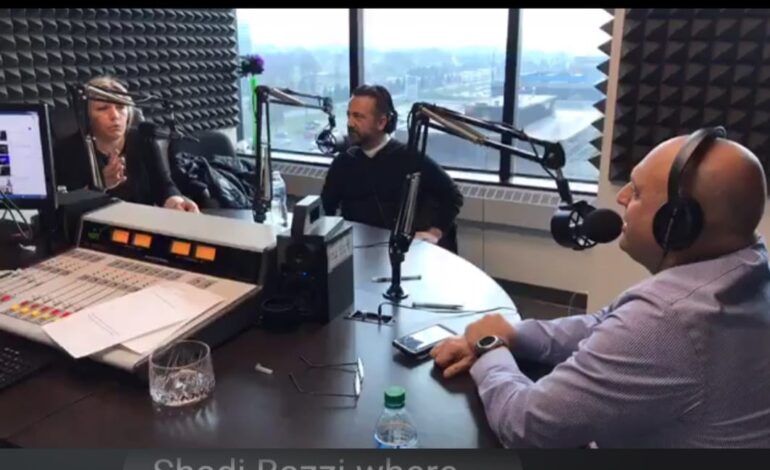 DEARBORN — After co-hosting the locally broadcast weekly radio show, “Talking Real Estate” on CINA Radio (102.3 FM) for two years, local attorney Ali Dagher claimed his contract was wrongfully terminated Wednesday. Dagher said this was due to general comments he made on air regarding the local community protests for Palestine he witnessed on Sunday.

At the closing of Wednesday’s show, Dagher recalled turning to his co-host, Mariam Khalaf, a local real estate agent and owner of Sunflower Realty, and saying, “You know, Mariam, I got very emotional on Sunday when I saw all these people demonstrating on behalf of Palestine.

I did not promote a demonstration. I said how proud I was of the youthful participation. I am proud to see young people participate in the democratic process — Ali Dagher (co-host of CINA Radio’s “Talking Real Estate”)

“And to me, what impressed me the most is the number of youth that I saw between the ages of 16 to 25, who appeared on the streets and took their resolution in this situation. And to me, it brought tears to my eyes.”

Minutes after the show ended, Dagher said he received an email with the subject line “Palestine protest” from CINA Radio Sales and Operations Manager Al Pervin. The Arab American News obtained copies of the email thread between Pervin and Dagher. The original message is below: “I never got this email,” Dagher said, referring to his response. “I wrote back, ‘I did not promote a demonstration. I said how proud I was of the youthful participation. I am proud to see young people participate in the democratic process.’”

In response to the incident, Pervin told the Arab American News, “Speaking generally, Radio CINA covers news events on our newscasts, which are well prepared and follow the fairness and accuracy standards of the Canadian broadcast industry. We do not allow our hosts who purchase airtime to comment politically. Those hosts are to focus on their area of expertise, such as real estate, beauty services, law or heart disease.”

(CINA) welcomes requests from credible organizations to have topics discussed on our airwaves, so long as a CINA employee is host and all sides of an issue are aired – Al Pervin, CINA Radio Sales and Operations Manager

When asked if the decision to terminate Dagher’s contract was politically motivated, Pervin said, “CINA never acts in a political manner. For example, our newscasters are briefed on fairness and accuracy, but are left to choose which stories to cover and how to write them. If one of our newscasters writes a story on Gaza and Israel, a CINA manager would give no input. We trust the honesty and fairness of the people who work for us.”

Pervin explained that CINA “welcomes requests from credible organizations to have topics discussed on our airwaves, so long as a CINA employee is host and all sides of an issue are aired.”

After Dagher’s abrupt contract termination, Khalaf said she was offered an opportunity to continue the show but chose to decline.

“I believe this was a misunderstanding that was blown out of proportion and even though the station offered me to continue the show without my co host, Ali Dagher, I could not do so in good faith.”

When asked what impact he expects these concerns will have on his audience, Pervin said, “I am sure our audience will recognize our commitment to what we do. We are proud to be the only Arabic language FM radio station serving to a U.S. market (to my knowledge).”

Dagher and Khalaf co-hosted “Talking Real Estate” every Wednesday, speaking on public education topics regarding real estate and legal advice. The weekly show ran for four years and was broadcast in Windsor, Canada and Southeastern Michigan.

CINA Radio is a Canadian-based Arabic language media brand. Ninety percent of listeners have tuned in from the U.S.

Dagher said he remains resolute in his stance and plans to pursue legal options going forward.

“I want people to know that nobody should be silenced. No matter what the consequences are. Speak up. Let your voice and opinions be heard. Our time has come to no longer remain silent.”