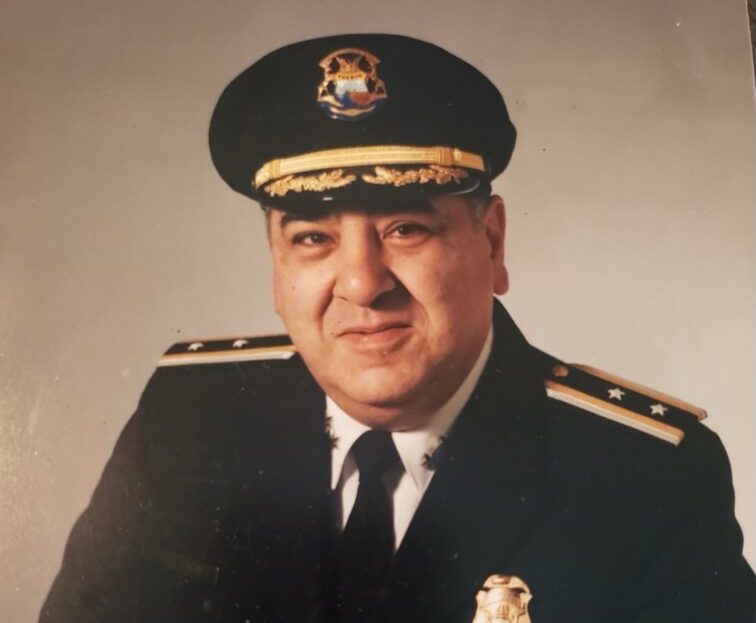 Francis Cyril Allen, born a Detroiter in 1929 to Sadie (Maklouf) of Trablos and Minum Allen of Zahle; a CYO football champion and (in his mind at least) sandlot hall of fame third baseman; a Korean War Veteran; for 59 years, the faithful husband to the only woman he ever loved (the girl next-door and his eighth grade crush); the father of five men (Robert, John, Daniel, David and James) he loved beyond any earthly measure and hero to his 13 adoring grandchildren and two great grand-children, joined his beloved Mary Lou in eternal life on May 25. Frank bravely served the people of the city of Detroit as a policeman for 41 years, retiring in 1993 as a decorated deputy chief.

To the outside world, he may have seemed an earnest professional man and he was. To his friends and family, he had the tenderest and most compassionate heart. Like the good shepherd that he was, his life and his faith taught him that no one was beyond redemption. He never turned away from his calling as a man of service. He taught his children to love and to trust. He was forged from bedrock and born with a lion’s heart and an indomitable will to serve and to give.

He was strong as a bull, but he never bullied anyone. His strength and his talent was protecting the weak and welcoming and valuing those who others cast aside. No one in this life is perfect, but his sons believe he was the closest any lucky son ever had to a perfect father. Always present and involved in their lives, there was no greater thrill for them as children than to shoot hoops or play catch with him or run errands with him on Saturdays. They knew that, on every Christmas morning, he would be the first one downstairs to light the tree (usually in his boxer shorts and slightly torn white t-shirt) and that his greatest pleasure on those days and every other was always in the giving and not the receiving.

He had his ways. Many of you witnessed them first-hand and will never forget what it was like to be corrected by him, but never with malice. Children, even grown ones, need to know that their father loves them. Frank never let a day pass without saying those three words to each of his sons. His love was never rationed. It was his sons’ greatest privilege to share in its abundance and spread it to all he knew they would encounter on their own journeys, and he gave them the freedom —sometimes with words of caution and lectures from his own mistakes and  experiences — to shape in their own images.  He never pulled a silver spoon from the mouths of his boys, but they wanted for nothing. They proudly carry his name and live his traditions.

Frank was proud of his Arabic heritage. He loved the entirety of the Arabic community in Metro Detroit. He didn’t care what country they came from or how they chose to express their love for God. He dreamed of a day when all people of Arabic heritage would focus only on those things that unite them.  He taught that there was great strength in such unity and weakness in division. His friends in the Arabic community are too numerous to list. Of special note was Malek Beydoun, who he counted as one of his sons. Malek had the honor of taking Amu Frank to Lebanon in 2006, a lifelong dream of Frank’s that he spoke about until his final days.

Amu Frank was a devoted reader of The Arab American News. He confessed once that he used to take two copies from the Saad Market on Warren Ave., one for home and one to read on his lunch. In his later years, when his trips to Warren Ave. and to Dix became less frequent, he learned how to navigate to the home page on his iPad. He watched interviews in which The Arab American News Publisher Osama Siblani participated like a sports fan watching the home team playing. His son Jim said that one of the best things he did for his boys was to introduce them to the paper and its publisher.