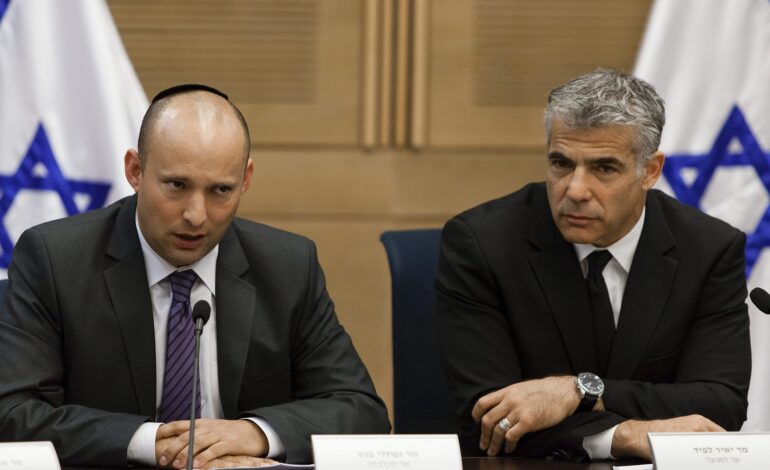 Naftali Bennett and Yair Lapid in a 2013 photo. Photo: Flash90

Israel’s Prime Minister Benjamin Netanyahu is facing an end to his long reign over the country, as his rivals pressed on with a political pact to unseat him on Tuesday.

After March’s inconclusive election, the country’s fourth in two years, Likud emerged as the party with most votes. But after wooing smaller right-wing and religious parties, Netanyahu was unable to form a new government within the 28 days given to him by President Reuven Rivlin.

The far-right Naftali Bennett of the Yamina party, who has has previously said he has no problem killing Arabs and urged the bombing of Gaza, emerged as kingmaker out of that failed election, as he declared over the weekend that he will form a power-sharing alliance with Netanyahu’s centrist rival Yair Lapid. Lapid’s Yesh Atid party won the second-most votes in the last election and was tasked with forming a government after Netanyahu failed.

A surprising development, seeing as Bennett had previously promised his supporters that he would not form a coalition with what he called “left” parties, including Lapid’s. Many of Bennett’s far-right base is upset at the concession.

Lapid is now offering Bennett the chance to serve as prime minister first in a planned power-sharing rotation between the two.

Bennett is the leader of Israel’s illegal settlements in the West Bank as head of the Yesha Council. He was a military officer and called for an artillery bombardment in 1996 to cover the retreat of his unit near the village of Kafr Kana in Lebanon. The barrage killed more than 100 Lebanese civilians. He also formerly served as chief of staff in Netanyahu’s office.

Bennett boasted in 2013 that he had “killed lots of Arabs in my life and there’s no problem with it” and that “the Palestinians are like a (bomb) fragment in the bum.”

In a recent analysis for the Middle East Eye, Shir Hever says Bennett has cultivated “an image of a man fraught with internal contradictions, one who attempts to act as tough and hawkish but consistently fails to live up to that role.”

The analysis also points out several components of his public persona in Israel, with appeals to “hawkish, racist and religious side of Israeli politics.”

Bennett’s religious reasoning for taking Palestinian land through settlement building stems from the Zionist belief, emerging long before establishment of Israel in 1948, that there must be “maximum land for Jewish Israelis with minimum Palestinians.”

He also threatened bomb Lebanon back to the Stone Age in 2018. Bennett’s Zionist beliefs in Israel’s ownership over Palestine aside, the millionaire settlement leader lives on the Israeli side of the Green Line.

The alliance between the former journalist Lapid and Bennett is now threatening to end Netanyahu’s 12-year rule in the country, just as the prime minister is on trial over corruption charges.

The right-wing New Hope leader, Gideon Sa’ar, strongly opposes joining a government that includes the Arab-dominated Joint List bloc, but said he would sit down with the United Arab List headed by Mansour Abbas.

The deadline for Lapid to announce whether he has formed a majority coalition is at midnight on Wednesday. If Lapid fails to form a government, the mandate will pass to the Knesset (Israeli parliament), which will have 21 days to try to form a coalition or be forced by law to call a fifth election.

Syria’s Assad wins fourth term with 95 percent of the vote, in election the West calls fraudulent