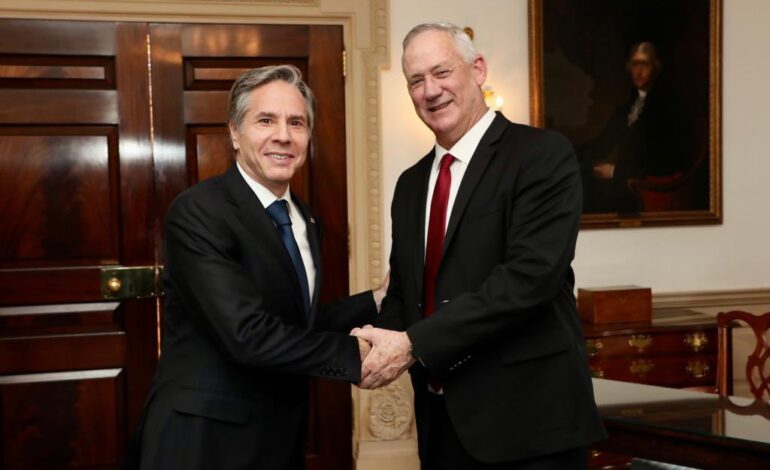 WASHINGTON, D.C. — Israeli Defense Minister Benny Gantz arrived in Washington D.C. to visit the Pentagon and the White House on Thursday and ask for $1 billion to replenish Israel’s Iron Dome after the latest, multi-week, bombing campaign on Gaza, which killed more than 250 Palestinians, including 67 children, displacing more than 70,000.

The Iron Dome, already partially funded by the U.S., is a missile defense system that intercepts rockets. Israel’s supporters in Washington, both Democrats and Republicans, want the U.S. to replenish the system and other military supplies after the 11-day bombing campaign on Gaza.

The U.S. began providing funding for the Iron Dome in 2011 and 55 percent of the system’s components are currently manufactured in the U.S., according to the Center for Strategic and International Studies. The $1 billion would come on top of more than $3.8 billion of U.S. taxpayer money that goes to fund the Israeli military annually, stemming from an agreement signed under the Obama administration.

The Biden administration remained silent and uncritical of Israel’s actions during the 11 days, even as it bombed residents and businesses in Gaza, indiscriminately killing civilians and bombed a tower used by international news agencies like the Associated Press. It also blocked several U.N. Security Council resolutions to denounce the violence and call for a ceasefire. Israel’s actions saw widespread international condemnation and protests.

A dozen Israelis, including two children, were killed in the violence, which came after Hamas shot rockets in retaliation for days-long invasion by Israeli forces of the Al-Aqsa mosque in Jerusalem’s Old City, where Palestinian worshippers gathered for Ramadan.

In the lead up to the events, Israel had also cracked down on protests against the forced expulsion of Palestinians from their homes in the occupied East Jerusalem neighborhood of Sheikh Jarrah to make way for Jewish settlers. These events coincided with provocations by emboldened racist, nationalist elements in Israeli society, with Zionist groups marching in Jerusalem chanting “Death to Arabs.”

The Hill reported that President Biden has already pledged to replenish Israel’s supply of Iron Dome rockets, even as some Democrats have pushed for reevaluating U.S. military aid to Israel over human rights abuse allegations and Israel’s actions in the May violence. But other Democrats continue to side with Israel on the matter. (Sullivan) reaffirmed President Biden’s unwavering support for Israel’s right to defend itself and commitment to strengthening all aspects of the U.S.-Israel security partnership, including support for the Iron Dome System — White House readout

According to a readout from the White House regarding Gantz’s meeting with U.S. National Security Advisor Jake Sullivan, the pair discussed recent developments in the region and continued consultations “between the United States and Israel on regional security issues.”

“Mr. Sullivan reaffirmed President Biden’s unwavering support for Israel’s right to defend itself and commitment to strengthening all aspects of the U.S.-Israel security partnership, including support for the Iron Dome System,” the readout said. “They exchanged views on the current situation in Gaza and Mr. Sullivan highlighted the importance of ensuring that immediate humanitarian aid is able to reach the people of Gaza.

“They also discussed their common interest in steps to enhance stability, peace and security not just for Israelis and Palestinians, but across the entire region. They shared their concerns about the threat posed by Iran’s aggressive behavior in the Middle East and expressed their determination to counter these threats. They agreed that the United States and Israel would remain closely engaged in the weeks ahead to advance their strategic priorities in the region.”

On Wednesday, 55 bipartisan lawmakers, led by U.S. Rep. Josh Gottheimer (D- NJ), addressed a letter to Defense Secretary Lloyd Austin that the U.S. should “continue urgently engaging with Israel” on the administration’s “ironclad commitment to Israel’s safety and security, including replenishing Israel’s stock of interceptors for the Iron Dome missile defense system and other important matters.”

Gantz was also expected to speak with U.S. officials concerning the Iran nuclear deal and other matters. Prime Minister Benjamin Netanyahu has said Israel would continue working to thwart Iran’s nuclear program, even at the cost of tensions with the U.S., a position that saw criticism from Gantz.

Netanyahu is currently on trial for corruption and is facing an ouster after his rivals agreed to a multi-party coalition against him. That coalition could mean a power sharing premiership between far-right nationalists and centrist party leaders, but it still needs to be ratified by parliamentary vote.

Activists from the Palestinian Youth Movement (PYM), U.S. Campaign for Palestinian Rights (USCPR) and other grassroots solidarity groups demonstrated outside the White House on Thursday on the occasion of Gantz’s visit. In a statement to The Arab American News, the USCPR said the Biden Administration “has Palestinian blood on its hands.” Merchants of death, like Boeing who are selling $735 million in bombs to Israel, and heads of empire, like President Biden who said he would give $1 billion more in military funding to Israel, work hand in hand to keep our tax dollars funds weapons flows to Israel’s occupation and apartheid… – U.S. Campaign for Palestinian Rights

“The past month has exposed how merchants of death, like Boeing who are selling $735 million in bombs to Israel, and heads of empire, like President Biden who said he would give $1 billion more in military funding to Israel, work hand in hand to keep our tax dollars funds weapons flows to Israel’s occupation and apartheid–while we demand reinvestment in life-giving policies like housing and healthcare,” the statement said. “We will build a people’s arms embargo to stop the flow of U.S. weapons that arm Israel’s ongoing ethnic cleansing of the Palestinian people from their homeland.” Protestors hold a sign outside the White House, June 3, 2021, on the occasion of Israeli Defense Minister Benny Gantz’s visit to Washington D.C., in part to ask for billions to support military occupation efforts in Palestine. Photo courtesy: Laura Albast

USCPR spoke of a recent incident circulated on social media in which Israeli forces shot a rubber bullet and fractured the spine of Palestinan child Jana Kiswani for simply standing in the doorway of her home in Sheikh Jarrah and shot another round at her father’s leg when he came to her aid.

Horrific. Just released CCTV from inside home of Jana Kiswani, the girl who was shot by Israeli forces outside her home in #SheikhJarrah Jerusalem during May 18 strike.
I was there too & witnessed the indiscriminate shooting by police into people's homes. pic.twitter.com/CEhhmc2qNj

“That’s why organizers are calling this brutal targeting of Palestinian people a genocide,” USCPR continued.

Amer Zahr, law professor at University of Detroit Mercy, told The Arab American News on Thursday that the developments in Washington show that Palestine should not be seen as a foreign policy issue.

“We cannot think of Palestine as a foreign policy issue,” Zahr said. “When we have American homelessness, poverty, devastated infrastructure, and underfunded communities, and our government is providing Israel with $4 billion of our taxpayer money in aid every year, and extra billions whenever they wish, Palestine is a domestic issue.”