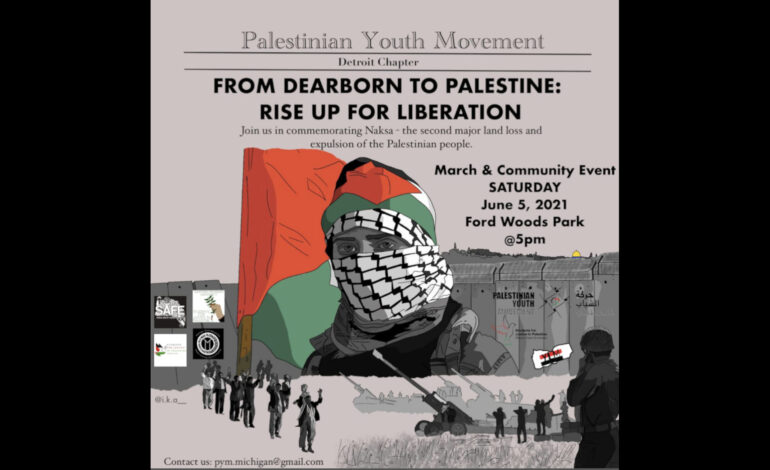 DEARBORN – Organizers and community members will gather this Saturday, June 5th, at Ford Woods Park in Dearborn, to commemorate the 54th anniversary of Al-Naksa (or “the setback”) marking 54 years since the second major land loss and mass expulsion of Palestinian people from their homeland.

The event will include a march and a political letter-writing campaign. Water and snacks will be provided.

“The Six Day War, in June of 1967, ended with devastating impacts for the native Palestinian population. In less than a week, the war resulted in Israel gaining control of over 1 million Palestinians and forcing 300,000 Palestinians from their homes.

In addition to the lasting impacts of this war, Israel continued its occupation, land theft and ethnic cleansing of Palestine. Most recently, during the 11-day Israeli attack on Gaza in May, Israeli air and artillery attacks killed 253 Palestinians, including 66 children, and left more than 1,900 people wounded. Israel’s aggression is a declaration of war against Palestinians and against a people’s right to resist an oppressive colonial rule. On Saturday we come together to commemorate this history and to gather as a community united to combat Zionism.”

This event is co-sponsored by: