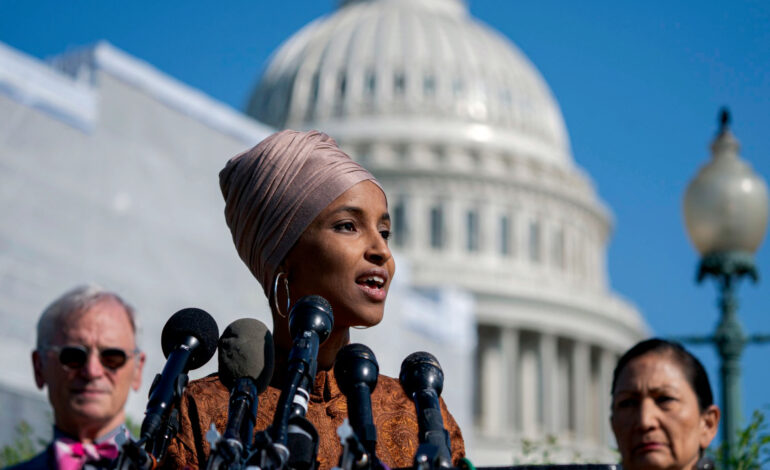 WASHINGTON D.C. — U.S. Rep. Ilhan Omar (D-MN) clarified earlier remarks regarding open investigations by the International Criminal Court (ICC) into war crimes committed by Israel, the U.S., Hamas and the Taliban, after backlash from both Democrats and Republicans.

On Monday, Omar questioned U.S. Secretary of State Antony Blinken about the U.S.’ refusal to recognize the ICC’s investigations into war crimes committed by Israel in the occupied territories and the latest 11-day bombardment in Gaza, and the U.S. in Afghanistan. The ICC is also investigating similar charges for Hamas and the Taliban.

In a video she tweeted on Monday, Omar asked Blinken what “mechanisms” towards justice were available to victims of U.S. and Israeli war crimes if the countries refused to accept such investigations.

“We must have the same level of accountability and justice for all victims of crimes against humanity,” she tweeted. “We have seen unthinkable atrocities committed by the U.S., Hamas, Israel, Afghanistan and the Taliban. I asked @SecBlinken where people are supposed to go for justice.”

We must have the same level of accountability and justice for all victims of crimes against humanity.

We have seen unthinkable atrocities committed by the U.S., Hamas, Israel, Afghanistan, and the Taliban.

I asked @SecBlinken where people are supposed to go for justice. pic.twitter.com/tUtxW5cIow

The questioning saw outrage from a group of Jewish Democrats, as well as conservative lawmakers and media, who said Omar had equated Israel and the U.S. with Hamas and the Taliban.

On Wednesday, a group of a dozen Jewish Democrats who support Israel, led by U.S. Rep. Brad Schneider (IL), issued a joint statement calling on Omar to “clarify” her comments.

“The United States and Israel are imperfect and, like all democracies, at times deserving of critique, but false equivalencies give cover to terrorist groups,” said the lawmakers. “We urge Congresswoman Omar to clarify her words placing the U.S. and Israel in the same category as Hamas and the Taliban.” You might try to undermine (ICC) investigations or deny justice to (victims), but history has taught us that the truth can’t be hidden or silenced forever — U.S. Rep. Ilhan Omar (D-MN)

Omar responded to the pushback and calls for clarification, saying that she was referring to attempts to “undermine these investigations or deny justice to their victims.”

“Citing an open case against Israel, US, Hamas & Taliban in the ICC isn’t comparison or from ‘deeply seated prejudice’,” she tweeted. “You might try to undermine these investigations or deny justice to their victims but history has taught us that the truth can’t be hidden or silenced forever.”

Omar also said on Wednesday that her fellow Democrats were unfairly singling her out because of inherent anti-Muslim bias and engaging in false tropes that Muslims support terrorism.

“The islamophobic tropes in this statement are offensive,” Omar tweeted. “The constant harassment & silencing from the signers of this letter is unbearable.”

Omar’s office said that the congresswoman and her staff have been facing an increase in death threats since the controversy over her questioning of Blinken, the Hill reported. It also said that she tried to reach out to the Democrats who crafted the joint statement, but her calls weren’t returned.

Omar tweeted an expletive-filled audio of a man saying that “Muslims are terrorists”, while calling her a racial slur. The person said that “every anti-American communist piece of shit that works for her, I hope you get what’s f—ing coming for you.”

On Thursday, Omar made another clarifying statement, saying “the conversation was about accountability for specific incidents regarding those ICC cases, not a moral comparison between Hamas and the Taliban and the U.S. and Israel.”

She added that she “was in no way equating terrorist organizations with democratic countries with well-established judicial systems.”

Both the House Democratic leadership and Schneider accepted Omar’s clarification.

U.S. Reps. Rashida Tlaib (D-Detroit), the only other Muslim woman in Congress, and Alexandria Ocasio-Cortez (D-NY) came to Omar’s defense.

“I am tired of colleagues (both D+R) demonizing @IlhanMN,” Tlaib tweeted. “Their obsession with policing her is sick. She has the courage to call out human rights abuses no matter who is responsible. That’s better than colleagues who look away if it serves their politics.”

“Pretty sick & tired of the constant vilification, intentional mischaracterization and public targeting of @IlhanMN coming from our caucus,” tweeted Ocasio-Cortez. “They have no concept for the danger they put her in by skipping private conversations & leaping to fueling targeted news cycles around her.”