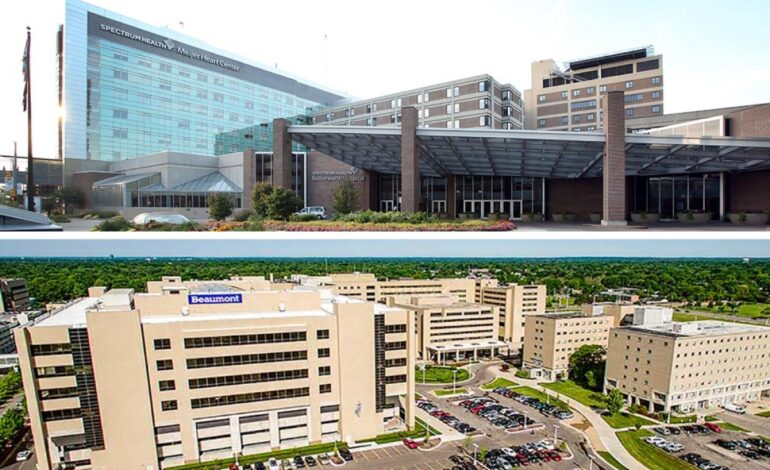 DEARBORN — Beaumont Health and Spectrum Health have announced that they’ve signed a letter of intent to unite, forming a new health system.

This new, massive health system would employ 64,000 people and operate 22 hospitals throughout the state.

The deal would also include Priority Health, an insurance plan that enrolls 1.2 million people under the Spectrum Health umbrella and claims to be the fastest growing and second largest in Michigan.

“We are, Spectrum Health and Beaumont Health, taking the next step in our bold vision to transform health in Michigan,” Tina Freese Decker, president and CEO of Spectrum Health, said. “What we’ve been through collectively in our state and our country over the past year has really solidified why we exist and what we do. And it also tells us what we can do even better. So it is with this in mind that we are really excited about the opportunity to bring together Spectrum Health and Beaumont Health… We are coming together for Michigan by Michigan to improve the health of our community.”

Until the merger is finalized and the new name is decided on, the health system will go by BHSH System temporarily.

If the plan passes regulatory reviews, the BHSH System would have dual headquarters in Grand Rapids and Southfield.

The Federal Trade Commission (FTC) has to review mergers of hospitals and physician groups in order to uphold antitrust laws, encourage competition to drive down costs, improve care and foster innovation while the Department of Justice (DOJ) reviews mergers of insurance plans.

Freese Decker said they hope to have the regulatory approval by the fall.

“There are no overlapping areas in our market, and so there are no intentions right now of any closures for hospitals or services as a result of integration,” she said. “In fact, we want to make sure we can continue to grow our services and so I expect things to continue as they are right now. I’m very confident that this combination to create a new health system would be very favorable to our state. The (state) Attorney General’s Office is aware, but because this is two Michigan nonprofit organizations coming together to create a new system, we do not believe that this is something that the AG needs to approve.”