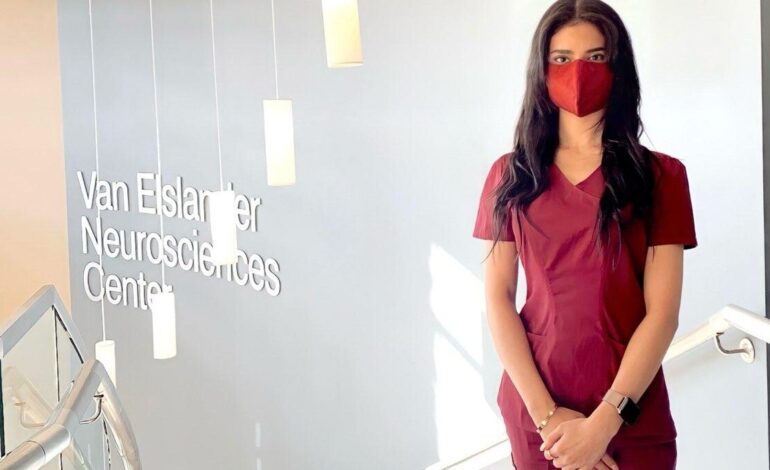 Noor Alesawy is a neuroscience student at the University of Michigan and works at the Van Elslander Neuroscience Center of Excellence. Photo: Noor Alesawy

DETROIT — At 20-years-old, Noor Alesawy is already a rising star in the field of neuroscience study in the U.S. and receiving praise back home in Iraq as a symbol of national pride.

Alesawy is an undergraduate student who recently transferred from Wayne State University to the University of Michigan in pursuit of dual bachelor’s degrees in neuroscience and business administration. She also works as a research assistant in two laboratories led by WSU School of Medicine faculty members and was recently named the Nu Rho Psi National Outstanding Neuroscience Student of the Year for 2020-2021.

It’s a different kind of pride and joy when you see so many people from your country saying ‘We’re so proud of you, you’re bringing up the national name, good job!’ — Noor Alesawy

Soon after being awarded, Alesawy said her extended family in Iraq found out from news reports in Baghdad that featured her accomplishments.

“It’s a different kind of pride and joy when you see so many people from your country saying ‘We’re so proud of you, you’re bringing up the national name, good job!’” she said.

As a first generation immigrant to the U.S., Alesawy said she wants to show that “obviously Iraqis and (other) Arabs are intelligent people and we can do better when provided with resources.”

Born and raised in Baghdad, Alesawy moved to the U.S. with her immediate family when she was 12-years-old in hopes of more educational opportunities for herself and her brother. They settled in Boston for a short time before moving to Michigan to be closer to the Arab culture and community.

“My mom is definitely my role model,” Alesawy said. “Growing up, my mom was always a strong woman. In the Middle East, she was an engineer, both my parents were engineers. Everyone in my family looked up to my mom; she was always showing me exactly what women can do in terms of starting her own company.”

Alesawy said she is humbled and motivated every day by her parents’ selfless sacrifice to leave their jobs, families and everything else they built, all in order to ensure her and her brother take advantage of every opportunity to learn and grow in the U.S.

“I have been loving neuroscience ever since I was little,” she said. “So I was really glad that when I went to Wayne State University, I kind of hit the jackpot because it was the first year that the (neuroscience) major was offered, before then it was only a minor study.”

As part of the first cohort, Alesawy said she was lucky to be able to help build the program and cultivate opportunities for herself and others. She helped start a mentorship program between neuroscience undergraduates and professors and graduate and medical students.

The cohort is preparing to launch a neuroscience research program this summer. Detroit high school students will have the opportunity to learn from WSU Medical School faculty and graduate students as a pipeline initiative to encourage youth interest in the neuroscience discipline.

I do research on refugees and find genetic biomarkers of PTSD for Syrian and Iraqi refugees. I found myself really loving being involved in that because I know that feeling of resettling into a new country — Noor Alesawy

Alesawy’s professional interests also extend beyond academic spaces. She is passionate about the creative development of business skills training within the scientific research community.

“I did more research and found there are a lot of business skills that are integrated into the field,” she  said. “I found that there’s just so many possibilities, from health care administration to consulting, to even starting your own practice one day. It’s all about learning leadership and organizational behavior. “

Last year, she was part of a committee at Wayne State University that established a MD-MBA, a dual program for graduate students in medical school and a master’s in business administration.

Alesawy is also part of two research projects that explore neuroscience and “the art of war.” One of the projects is studying traumatic brain injury and alternative therapeutic treatment to opioids for military personnel returning from war in the Middle East. She emphasized this important work adds value to the U.S. Veteran Affairs Department and the Detroit Medical Center.

The other side of this study is centered on civilians, in particular the mental health of refugees in the U.S. Alesawy also worked as an Arabic interpreter with those displaced by the detrimental factors of warfare in their homelands.

“I do research on refugees and find genetic biomarkers of PTSD for Syrian and Iraqi refugees,” Alesawy said. “I found myself really loving being involved in that because I know that feeling of resettling into a new country.”

As an Arab American woman in the STEM field, Alsawey said she is grateful for the warm welcome and commendations she continues to receive from colleagues and faculty at school, as well as the Arab community in Dearborn.

Alesawy is determined to use the opportunities and support she was afforded and hopes to continue paying it forward to the next generation.

“For young Arabs and Iraqis, I hope they continue to work hard in the United States or anywhere else, especially if you’re first or second generation,” Alesawy said.

“You wouldn’t have established networks of people in the field, but find other members in the community who are involved; we are always so welcoming because we know how hard resettlement and adjustment is.”