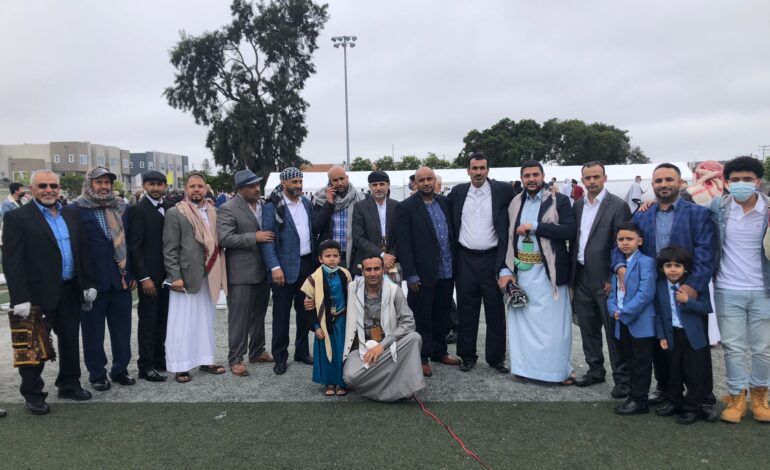 Through their efforts, the district passed a resolution that urges the superintendent to recruit and retain teachers that represent Yemeni students, hire Arabic-speaking staff in the enrollment office and hire more Arabic-speaking tutors and counselors with an awareness of the Yemeni dialect and of Yemeni and Arabic cultures.

California’s Bay Area is home to a large and growing population of immigrants from Yemen. But Yemeni Americans can trace their roots in California much further back. Yemenis had been instrumental in struggles of the agricultural working class in California in the middle of the last century.

Recent waves of immigration have created a more Arabic-speaking Yemeni population in the area. 2014’s civil war, exacerbated by foreign influences from Saudi Arabia and Iran, created impossible odds for many Yemenis and many Yemeni Americans rushed to help families migrate to safety, though that influx was slowed dramatically by the Trump administration’s travel ban.

The resolution points out that Yemeni students constitute the fifth largest group of newcomers in the OUSD and a significant portion of Arabic-speaking families in the OUSD are from Yemen. It also says Arabic-speaking students are graduating below the district’s average and notes reports of bullying and discrimination against students.

It also notes that war and strife back home have interrupted the education of many students who eventually immigrated to the school district. As census data categorizes people from the Middle East as White, the district officials had counted Yemeni students by inferring from the number of students who speak Arabic at home and list Yemen as their birth place. But that left out those students born in the U.S. or who speak English at home.

The Oakland area publication Oaklandside recently covered the area’s Yemeni population’s achievements in the unified school district. Oaklandside reported that Hesham Hussain, national board president for the American Association of Yemeni Students and Professionals, was able to estimate that the district serves about 1,000 Yemeni students. Hussain aided the district in crafting the resolution.

Given that there are about 10,000 Yemeni people living in Oakland, Yemenis comprise the majority of Arabic-speaking newcomer students and Arabic-speaking foreign-born students in the district. Thus the need for cultural training for staff and a need for tutors and counselors with an awareness of the Yemeni dialect and of Yemeni and Arabic culture. The new resolution also recognize the holidays Eid Al-Fitr and Eid Al-Adha on the school calendar, so that teachers can be more aware when planning test days or other school events around those days.

The Arab American News spoke to one of the key figures behind the resolution. Dhaifallah M. Dhaifallah, who does public relations for the Yemeni American Association, initiated the resolution knowing the urgent and specific needs of his community.

Dhaifallah is also the co-founder and manager of Saba Grocers Initiative, which works toward healthy retail in the Bay Area.

“Our community had felt insecure both after 9/11 and then again during the Trump administration and its ban on migration from countries like Yemen,” Dhaifallah said. “These events motivated me and pushed me to do more things for my community in the Bay Area.”

Over the years, Dhaifallah had sought ways to make his local government recognize the Yemeni community and its needs. He did research in order to determine which public offices could make an impact in the lives of Yemenis and Muslims, and especially for the area’s growing population of immigrant families.

“I reached out to Board of Education Director VanCidrec William, who we had supported in the previous election, and proposed changes to meet our families’ needs, which he agreed with wholeheartedly,” Dhaifallah said. “The recent war in Yemen drove local Yemenis to help bring their families closer. Many of those families don’t speak English. Many didn’t have a stable educational background. Many don’t feel safe taking their children to the enrollment center in their schools either due to a lack of Arabic language aid, or a lack of Arabic-speaking staff that understands our dialect.”

Through his research on community needs, Dhaifallah was able to sketch out the finer points of the resolution, including the twice-yearly cultural training for district staff, which can break the ice between them and the families they served.

Now we can look at the bigger picture and gather as Muslims to get recognition on the state level and find similar solutions for our needs there — Dhaifallah M. Dhaifallah

Dhaifallah contacted other Muslim and non-Muslim organizations and received support for a petition for the district board to take up the resolution. Many people spoke in favor of the proposals during the board’s deliberations, before its successful passage. He is thankful for that support, for William’s and for the “brothers and sisters” on his team who made the resolution a reality.

The community recently received further good news. With the resolution now intact, the district has now secured funding through the state to hire an additional person who speaks the Yemeni dialect in its enrollment center.

“Now we can look at the bigger picture and gather as Muslims to get recognition on the state level and find similar solutions for our needs there,” Dhaifallah said.