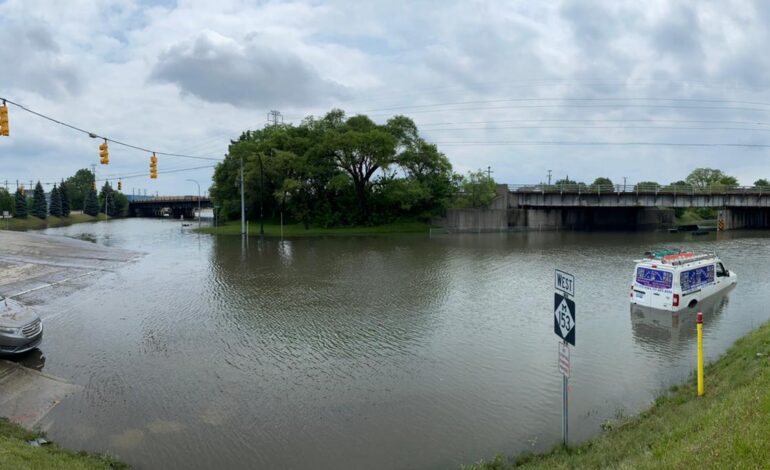 WAYNE COUNTY —Flooding after extended rainfall has prompted Governor Whitmer to declare a state of emergency in Wayne County.

The declaration allows the state to address threats to public health and safety related to the heavy rainfall, which resulted in widespread flooding, power outages, flooded roadways, stranded motorists, flooding of homes and displaced residents. The National Weather Service earlier forecasted heavy rain and strong winds over the weekend across southern Michigan. Additional counties may be added as needed and conditions change.

Whitmer has now made available all state resources in cooperation with local response and recovery efforts in the designated area.

Above: Aftermath of flooding in Detroit and Hamtramck, June 26. All photos: Hassan Abbas/The Arab American News

On Saturday, U.S. Rep. Debbie Dingell (D-Dearborn) sent a letter to President Biden urging for immediate federal assistance to Michigan’s 12th District and the many other communities impacted in the last 24 hours. Representative Dingell is urgently working to secure relief for her constituents and released the following statement:

“I am in touch with Governor Whitmer and local officials as we assess the damage in Dearborn and surrounding communities from current storms across Michigan’s 12th District and beyond. I am also working closely with senior White House officials to immediately direct aid to our communities. To our 12th District constituents, rest assured my team and I are working as quickly as possible to send relief and keep you safe. As we work with the governor to declare a state of emergency and secure critical resources, please continue listening to local officials regarding any travel and safety precautions. Additionally, please document any property damage and call 313-943-3030 to report damages and flooding. Currently, the Ford Performing Arts Center is open and will provide residents with dry ice as well as shelter.”

Dearborn City Council President Susan Dabaja announced that the Council had approved the allocation of $500,000 for clean-up efforts. The Council is asking that residents place flood-damaged goods onto the curb. Residents can start putting out flood-damaged items on the curb immediately. GFL, the city’s garbage disposal service, will come around and assist with collecting garbage and any flood damaged goods, starting Monday.

Dearborn Heights will have a special meeting Tuesday to request allocation of funds to do the same.

“My team has and will be working on the flooding issue,” Bill Bazi, Dearborn Heights mayor, told The Arab American News. “Please stay off the streets and avoid flooded areas. Do not drive through it. Keep kids away from those areas. Some wires may be down.

Residents in Dearborn, Dearborn Heights, Detroit, Hamtramck and many other Wayne County communities reported waking up on Saturday morning to water in their basements, believed to be from sewage system backups, with levels exceeding a foot at times. Vehicles were left abandoned after their occupants left them in flooded areas overnight, especially under bridges and in underpasses, throughout Detroit, Dearborn and other cities.

Dearborn is no stranger to widespread flooding from extended rainfall, most notably in 2014 and 2018. Both times, Councilman Mike Sareini had asked for independent investigation into why the city’s streets are so prone to flooding. Those requests were not approved by the Council back then, but Sareini told The Arab American News on Saturday that he will push for another one this time and is hopeful his fellow Council members will authorize it.

Residents are now wondering how they can be compensated from the damage to their homes and possessions. Attorneys put out messages on social media with ways to catalog the damage and makes claims.

Attorney Rabih Hamawi laid out some things to consider for those whose homes or businesses sustain water damage from the storms:

Disclaimer: These points are for informational purposes only. It does not create an attorney-client relationship and isn’t intended and should not be construed as the providing of legal advice. Hamawi says that if an insurance company delays, underpays or denies a claim, people should contact his law office, which handles fire and water property damage and insurance-coverage cases, at 248- 905-1133.

If a basement is flooded, the city will dispatch a maintenance crew to your address to determine if the stoppage is in the city main or your private line (sewer lateral). If the sewer main is found to be clear, it is then the responsibility of the property owner to call a licensed plumber or drain service to correct the problem. The city cannot recommend any plumber.

Preparing for a Flood