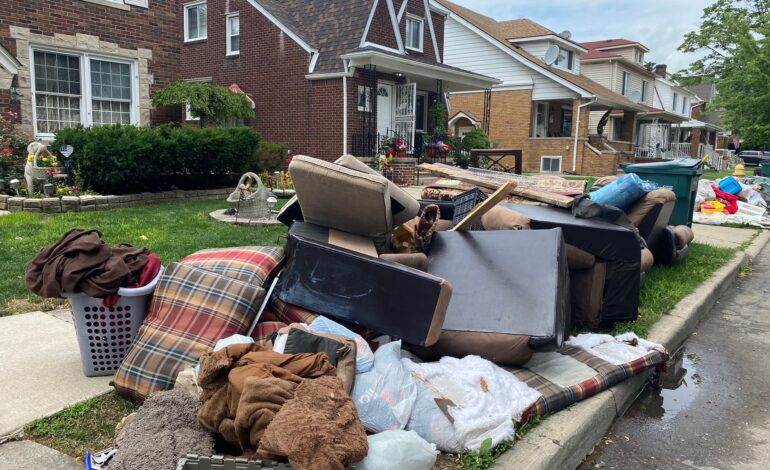 DEARBORN — After the third round of catastrophic flooding in less than a decade hit Dearborn this week, city leaders are addressing the issue and calling for an investigation.

As an immediate response to the flooding, Council President Susan Dabaja called for the first of two emergency meetings on Saturday morning.

“We are currently all-hands-on-deck,” she said. “Our DPW and PMADS staff have all been reallocated to help clean-up efforts. All non-essential services have been suspended. DPW is helping collect damaged material from the curbs and PMADS has also been focused on clean-up efforts and creating a volunteer program to help clean up inside of homes.”

As a part of the all-hands-on-deck effort, the city has contracted employees from Taylor, Melvindale and Canton, as well as private contractors.

On Saturday, Mayor Jack O’Reilly declared a state of emergency and the City Council allocated $500,000 to clean-up costs. On Tuesday, during the second emergency meeting, an additional $1.3 million was approved to go towards clean up efforts.

“GFL has been authorized to utilize the DPW yard to limit the amount of time needed to empty their trucks and our DPW team will then haul to the landfills,” Dabaja said. “We requested an independent evaluation and review of our sewer system so we can determine and understand where improvements are needed to be made.”

Councilman Mike Sareini said in a recent interview with The Arab American News that he had requested an investigation in 2014 when the first “one in 100 year flood” devastated Dearborn.

We are absolutely committed to exploring and learning about resolutions and involving all stakeholders, including the residents — Council President Susan Dabaja

Sareini said he was satisfied with the response then because despite all of the litigation against the city at that time, it won each time and the City Council was also told that the event was a once in a 100 year flood.

In 2014, the devastation was felt throughout southeastern Michigan and Dabaja said that’s why she didn’t see the need for an investigation at the time.

“Because of how widespread 2014 was, there didn’t appear to be a need for an investigation into the system when so many systems couldn’t withstand the amount of rain,” she said. “Where there seems to be some confusion is that the purpose of the CSO projects was to separate waste and rainwater and reduce pollution and doing so created some additional space for rain water. The information I have is provided by the city engineers and the administration. I promised residents to be transparent with the information that I have.”

Sareini said he called for an investigation following the flooding in 2018 as well.

“Throughout the time between 2014 and 2018, we were doing many sewer projects and I raised, many times, issues with our engineering department as to why there is only two to three inches of rain and there’s water in the street?” Sareini said. “They said, ‘that’s what we want, we want it to be in the street.’

“But I had never seen water in the street before so why is that? This is why we need a third party, independent investigation. That’s why I called for it again in 2018, on the record. And I said, on the record, because believe it or not, the engineer, the city had indicated that the construction, the flooding in west Dearborn that happened in ‘18 had to do with the grates weren’t being proper size, the fabric that was put in was not letting the water go through, and I said, on the record, that I did not believe that and that we needed an investigation and I could not get support.”

Dabaja and Sareini both also explained why east Dearborn has worse damage than west Dearborn. Sareini said that there are 13 outlet valves in the west end, but only two for the east and south ends and Dabaja said it has to do with topography.

While damages are still being assessed, the city estimates more than 10,000 homes were impacted and has extended the state of emergency to July 31.

“We are absolutely committed to exploring and learning about resolutions and involving all stakeholders, including the residents,” Dabaja said. “We are also addressing tow truck price gouging and suspending permit requirements for mechanical appliance installation into homes. We have also asked to continue seeking the National Guard to assist with clean-up efforts.”

While residents have 45 days from the day of impact to file a claim with the city, the city has a deadline of July 6 to submit the assessment to Wayne County. Residents can report their damage by visiting www.cityofdearborn.org or calling 313-586-3181.