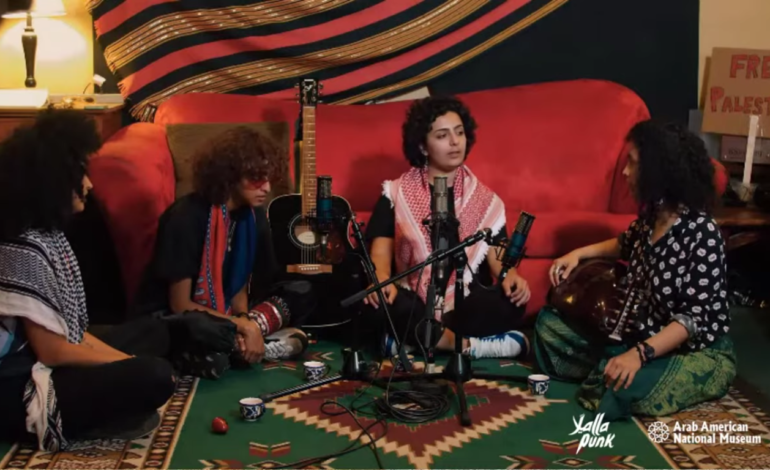 Closing out Pride Month, the museum and YallaPunk collaborated this year for the first time to present the event.

“The concert was an idea a few of us at the museum had for our virtual programming this year,” said Kathryn Grabowski, curator of public programs. “We really wanted to do a Pride concert and to uplift the artists involved. It was a natural fit to work with YallaPunk…the representation of queer SWANA folks is at the forefront of their mission, and there is trust there.”

I come from a very musical family. My dad loves music. My entire life, I grew up with a keyboard in the house, and the tabla, like the daribuka. That was something that existed. My dad played and my aunt played, there was always music playing in the house — Salma, INDKNA’s guitarist and vocalist

“It’s so important for us to support emerging artists,” said Rana Fayez, founder of YallaPunk, a Philadelphia-based organization that seeks to reshape the negative narrative of the queer South Asian and North African (SWANA) community through punk art and music.

When asked about the band’s challenging of cultural gender norms, Fayez said, “First and foremost, Layle for example, is a fantastic musician and composer, they are very talented with oud.

“Oud tends to be thought of as a man’s instrument and they (Layle) really wanted to break through all of that because there is so much gate keeping… it’s especially important to be safe and speak about Yemeni representation because what you probably see on the news is that Yemeni representation is violent and it’s war-torn.”

The band’s name “INDKNA” (end-dak’-na), derived from the Adeni Yemeni dialect, is a phrase meaning to point to oneself or the group one is part of, otherwise known as “here we are”

First gaining international publicity a few years ago as the first Yemeni female rapper, Amaani joined the band as one of vocalists.

“For me in the Yemeni community in Yemen and the war that is happening, they don’t have a lot of access to the Internet,” the singer said during the virtual concert’s Talk Back. “It’s a really hard situation and the least we can do is at least talk about these things in our music. The taboo things that we grew up told we shouldn’t talk about, but it’s really normal. We should normalize this.”

“I come from a very musical family,” said Salma, INDKNA’s guitarist and vocalist. “My dad loves music. My entire life, I grew up with a keyboard in the house, and the tabla, like the daribuka. That was something that existed. My dad played and my aunt played; there was always music playing in the house.”

Growing up in Yemen’s capital city of San’aa, Salma said their dad was always playing rock music and other western musical influences he picked up during his university education in the U.S. In addition to classical Arab music, her dad played covers from Led Zeppelin, The Beatles, Frank Sinatra, Tracy Chapman and Ella Fitzgerald.

The Yemeni musical and cultural traditions are notably lacking in the public representation of female and gender non-conforming people pursuing music. Salma said they have received some hesitation from people, but feel very privileged for having strong support from family and friends.

“This is the kind of access I have to music, but there’s always been a struggle.”

The band’s name “INDKNA” (end-dak’-na), derived from the Adeni Yemeni dialect, is a phrase meaning to point to oneself or the group one is part of, otherwise known as “here we are.”

INDKNA’s producer, Methal, is a Yemeni songwriter based in Canada. During former President Trump’s Muslim Ban, she took part in Spotify’s Collaborative Audio/visual Project, “I’m with the banned.”

Methal said the making of the music faced its difficulties and lessons learned. She explained the four band members have only ever met twice in person since each person lives in different states and even countries, as well as due to the COVID-19 pandemic.

The ensemble predominantly communicated virtually for the multilayered production process of their instrumental sound composition and lyrical arrangements, as well as numerous practice sessions.

INDKNA’s musical sound is a self-described experimental mix of Eastern and Western jazz and rock influences with lyrical elements of a Yemeni Arabic dialect.

After the concert live stream, the four band mates joined Fayez for a talk back conversation.

Fayez asked the group what message they would send to their younger selves.

Layle, an interdisciplinary migrant Yemeni songwriter and the band’s vocalist and oud player, said the group has talked about creating a potential album as a letter to their younger selves. They show their listeners the issues they experienced in Yemen and in the diaspora and the journey toward asserting agency and independence.

“I’m so incredibly proud of my band mates and to be in this band,” said Yasmine, multidisciplinary visual artist and INDKNA’s drummer.

“If we were to write a letter to our younger selves, if I were to tell my 12-year-old self, ‘You’re going to be in this radical, awesome band of super cool Yemeni babes who are all talented and smart and debut for a Pride concert’, I would have said, ‘No way.’ So, this just means so much.”