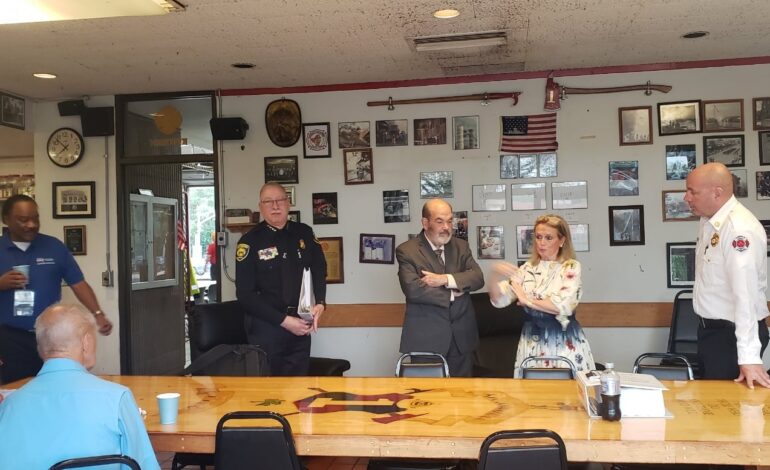 DEARBORN/HEIGHTS — With residents in both cities still reeling from the damage caused by the recent storms, city leaders are trying to get help from the federal government.

Representatives from the Federal Emergency Management Agency (FEMA) visited with local leaders in Dearborn on July 8 to assess the damages from the storms that impacted more than an estimated 10,000 residents across Dearborn and Dearborn Heights.

“Based on what I have seen, I am expecting to see higher numbers than 2014 and we had 9,300 people reporting damage in 2014,” Dearborn Councilman Mike Sareini said on Thursday. “FEMA is going door-to-door to speak to residents today, but they aren’t going into the homes. I want them to not look at the streets and think that there wasn’t a disaster just because we cleared the debris so quickly.”

“Residents have 45 days from the time of the floods to notify the city, by law,” Sareini said. “We had requested the assessments to be provided sooner so that we would have more data to provide to FEMA once they got here.”

Assessment teams collected disaster impact information, including total number of homes affected and degree of damage incurred, extent of insurance coverage, cause and concentration of damage and homeownership rates of impacted homes. Since disasters affect communities differently, teams also documented specific characteristics of each that may impact their ability to recover.

In addition, teams documented disaster-related casualties, resources already available from other sources and critical infrastructure that may be unavailable for an extended time, like hospitals, schools, utilities and nursing homes, as this could also significantly affect a community’s ability to recover.

Teams collected the data by talking to as many local officials, renters, homeowners and business owners as possible, but FEMA says it is not necessary to visit every home to complete the assessment.

The assessments are part of a process that could lead to the state asking for a declaration. FEMA works with the state to verify damage, but it is up to the state to determine if that damage is beyond state and local resources and whether to submit a declaration request. Federal assistance would only be made available after the state formally requests a presidential disaster declaration and it is approved.

Also starting this week are the assessments for public assistance or federal grant funding to local government jurisdictions and eligible private non-profits for the repair, replacement or restoration of disaster damaged infrastructure and costs incurred for emergency actions taken to protect lives or property. That assessment is done using imagery and photos, as well as phone interviews and virtual meetings.

While Sareini wants to push forward with an independent investigation into the flooding issue, he says the City Council needs more data.

“If anybody had flooding of high levels that were stagnant for a while but appeared to drain very quickly, we would like to be notified of that information in particular,” he said. “This will help us to identify if perhaps there was in fact a defect in the system.”

These residents are in dire need of relief, and now — Dearborn Heights Mayor Bill Bazzi

Dearborn Heights Mayor Bill Bazzi said more than 1,250 residents have submitted their assessment forms already and some homes have even been condemned due to the amount of damage caused by the floods.

In a three-page letter to President Biden, Bazzi highlighted the urgent need for relief to the residents. “I visited many homes over the past week and a half and have found people coping with unsanitary water and foul odor, in addition to severe damage to their personal property, having witnessed appliances, personal belongings and family memorabilia floating in this filth,” Bazzi’s letter read. “I visited one such home that was so severely damaged that its foundation had shifted and I asked the residents to leave the home immediately in fear it could collapse. In addition, countless residents have been left without electricity, hot water, washers and dryers or air conditioning in extreme heat and humidity.”

The letter went on to ask the president for emergency relief as soon as possible.

“Sadly, some of these are senior citizens and people with significant health conditions,” the letter said. “Mister president, our city needs emergency resources to help clear these residents’ homes, make them habitable and remove the damaged property from their curbsides. We are working around the clock with extremely limited resources compared to the amount of work that needs to be done. These residents are in dire need of relief, and now.”

Bazzi also compared some of the damage and devastation he has seen in people’s homes to the damage he had seen in war-torn third world countries when serving in the Marines.

“As a member of our military, we proudly operated with the knowledge we could be activated and deployed overseas with boots on the ground within 48 hours of an emergency,” the letter read. “It has now been over a week since Dearborn Heights was hit with this unusually severe flooding and yet we remain in limbo amid this widespread damage, all while doing our best to utilize and repurpose our own limited resources. Our government releases billions of dollars in military aid and our resources to assist those around the world during times of crisis and natural disasters. Please, mister president, help me understand why our own residents must wait weeks, and sometimes months, before they can begin to realize any type of relief from our federal government.” Heaps of damaged furniture from the flooding sit on the curb and overflow the city streets, waiting for emergency trash pick up. Photo: Imad Mohamad / The Arab American News

Bazzi also said in his letter that it is “unfathomable” that residents are living in these conditions on American soil and that it’s “unconscionable” to ask residents to pay for the National Guard for assistance when the flooding isn’t their fault.

“As a United States Marine, I never asked our country for anything in return for my service to the people,” Bazzi said in his letter. “However, as a mayor, I am now imploring you to help me assist the devastated people of my city. Our residents have not only been hit by this recent flood, many have also been plagued by floods countless times before while living in Dearborn Heights, a place some have called home for decades. Many of these floods brought continuous devastation, filth, unsanitary conditions, rodents, loss of property and the physical destruction of their homes in addition to hefty repair costs, which many simply cannot afford. These residents, in every sense of the word, are living in a hazard zone.”

With the passing of Independence Day, Bazzi said that it’s ironic to celebrate while residents have their lives in shambles with their properties destroyed and no tangible assistance from the federal government.

“As time is of the essence, I implore you to assist us with relief for the unsanitary conditions, damaged property and to make these homes habitable,” the letter read. “Our city needs immediate resources to assist with this recent flood devastation, in addition to assistance with our plan for a long-term solution. We remain committed to continuing our efforts, restoring our city and assisting the good people of Dearborn Heights.”