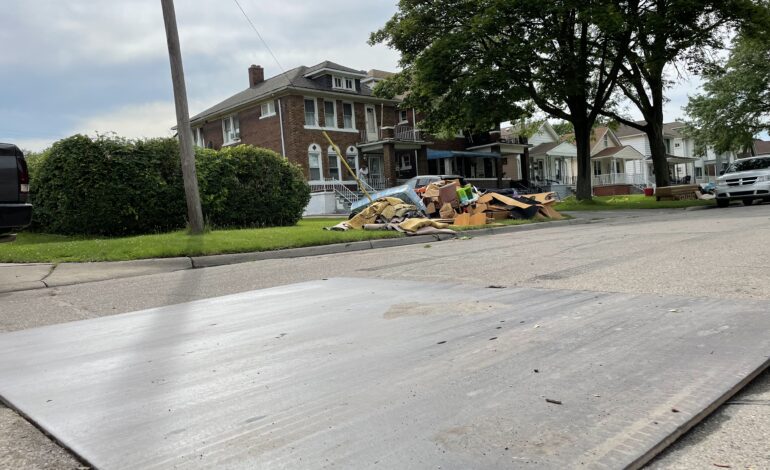 Trash from a flooded basement sits on a curb waiting to be picked up by the city in Dearborn's Southend. All photos: Bilal Baydoun and Ali Abazeed

Bilal Baydoun is a Michigan-based policy advisor and writer. He previously served as a lead policy and communications advisor in the Michigan Department of Attorney General. Ali Abazeed is a public health advisor with the U.S. Department of Health and Human Services based in Washington D.C. The authors were born and raised in East Dearborn and are graduates of the University of Michigan.

In the early morning of June 26, torrential rains drenched thousands of homes in waist-high water, leaving behind a trail of destruction not seen since 2014. Residents were left on their own to haul the sewage-soaked remnants of their lives onto narrow curb strips.

We were born and raised in east Dearborn, which, along with the Southend of town, bore the brunt of the devastation. These are the heavily Arab American parts of town, where trust in city government is brittle under the weight of history.

Five years before we were born, our hometown mayor declared that we were a problem. It was 1985 and Mike Guido was polling third in Dearborn’s mayoral primary. Around then, Arab Muslims like our parents, who’d just emigrated from Lebanon and Syria, were rapidly converging on a city whose racist impulses were still shaped by its ironclad border with Detroit. But ever aware of a stale narrative, the brash young Guido released a 12-page pamphlet to the city’s 90,000 largely White residents with the headline, “Let’s talk about the Arab problem.” The racial cheap shot rescued his campaign and paved the way for a 21-year reign in City Hall.

This legacy was fresh on our minds as we drove through the streets of our youth this past week, with entire bedrooms, living rooms and childrens’ playrooms lining congested blocks like post-apocalyptic ruin dunes. As far as the eye could see, not a single home was spared. In more affluent west Dearborn, the flooding damaged many homes, but not with the same severity and scale, leading residents in our former neighborhoods to question whether they receive second-class public service. Damaged possessions from a flooded basement in east Dearborn

Is it because they pay more taxes? Because they’re millionaires? Is it because, and I’m sorry to say, there’s more Arabs and Muslims here? What is it? — Salwa Jawad, east Dearborn resident

We spoke with Salwa Jawad, a former cafeteria worker at two schools in east Dearborn, who has lived on Oakman — the east side’s iconic boulevard — for over three decades.

“We always have problems here,” she told us, staring blankly at the couches that only hours before sat in her living room. They were now stewing on her front lawn in the 92-degree sun. “Is it because they pay more taxes? Because they’re millionaires? Is it because, and I’m sorry to say, there’s more Arabs and Muslims here? What is it?”

The median income of a west Dearborn household is roughly $72-78K, compared to $35k for East Dearborn and $40k for the city’s Southend zip code. As of 2019, just before COVID-19 upended the industries so many working-class people rely on, Dearborn had the third highest poverty rate in the state at 32 percent, behind Flint (39 percent) and Detroit (35 percent).

While Arab Americans have never been counted as a single racial group in the census, it’s estimated they comprise nearly half of the city population and live primarily in east side and Southend neighborhoods. This class disparity was laid bare as we surveyed the damage and spoke with distraught residents seeking respite after a year of pain, plague and isolation.

Like many in her neighborhood, Jawad effortlessly recites a litany of slights and failures she attributes to a city government shaped by the west side’s outsized power. The failure to keep roads safe, regular sewage backups and lack of upkeep of public parks and pools on the east side are just a few. She points to a tangle of electrical lines above her garage and compares it to Dahieh, the southern suburbs of Beirut where elaborate wiring systems drape residential buildings like an invasive species and symbolize the make-do spirit of life without effective government.

City officials deny that governance failures caused the flood’s lopsided impact, insisting instead on natural and topographical explanations. In response to our question of what went wrong, City Council President Susan Dabaja, who is also a leading mayoral candidate ahead of the city’s August primary, emphasized differences in river and land elevation.

“On a regular day, Rouge River elevation levels between East and West Dearborn already have a 2.5 ft. disparity,” she wrote, adding that heavy weekend rains led to a six-foot disparity. “Topographic differences also pose a challenge to East Dearborn as it is about 12 ft. lower in elevation than the West side.”

Dabaja’s assessment may be technically correct. But residents of the east side and Southend see an older and more complicated tale that began well before this latest disaster. In interviews we conducted over the last 10 days, they painted a picture of mistrust, inequality and an out-of-touch political class that only shows up to harvest votes and tax dollars.

To outsiders, boundaries between east, south and west Dearborn may seem artificial — the city does not formally recognize them. But through the lens of political power, cavernous divides become visible.

“This is not new,” said east Dearborn resident Mona Mawari. “This is what ends up happening when there isn’t equal representation in city government.”

To outsiders, boundaries between east, south and west Dearborn may seem artificial — the city does not formally recognize them. But through the lens of political power, cavernous divides become visible. Over the last decade, Goliath mansions have been constructed in west Dearborn’s toniest neighborhoods, where it’s not uncommon to find Bentleys and Ferraris parked in front of manicured lawns. In contrast to disheveled public spaces in the east and south, the west side is impeccably maintained.

The recent floods offered yet another glimpse of this east-west split. At the height of the emergency, we watched city vehicles pick up tree branches from west Dearborn streets while on the east side, the elderly and people with disabilities frantically texted volunteers for aid. The mayor and six out of seven members of the Dearborn City Council live on the west side of town, as several frustrated residents pointed out to us. Damaged possessions from a flooded basement in east Dearborn

A pattern of inequity

Redwan Ali said he received a call from his sister at 2 a.m. that Saturday asking him to check the basement of his Southend home.

“I ran down, and water was gushing out of the floor and out of the toilet,” he told us. “If I could move out of here I would. We’re treated like low-class people.”

Driving into Dearborn’s Southend, a community flanked by dozens of industrial stacks and the city of Detroit, it’s clear from the battered roads and caustic air the city has neglected this part of town. This predominantly Yemeni area is known for its impressive restaurants, thriving markets and the warm hospitality of its residents.

This isn’t just about the flooding. No matter what the city promises you, nothing happens. — Redwan Ali, Southend Dearborn resident

The frustration and resignation from the Southend are palpable. Residents see the flood damage as just the latest in a series of insults they have endured at the hands of a negligent city government detached from their needs.

“This isn’t just about the flooding,” Ali said. “No matter what the city promises you, nothing happens. They opened a new junkyard in this area… I don’t think they would put a junkyard in West Dearborn.” Samraa Luqman, a longtime Southender and community activist who is running for City Council, sees a longstanding pattern of inequity.

“What’s happening on the east and south ends is a continuation of what’s been happening for a long time. This is a prime example of how the city government treats one side of town differently than other sides.”

Dearborn does not use a ward system to apportion representation in city government, so there is no formal mechanism to ensure a community like the Southend — with unique challenges rooted in environmental injustice — gets its own representative. In the Southend, the constant drone of factories, and the air and noise pollution they spew, has led to some of the highest rates of asthma in the state and multiple lawsuits and settlements on behalf of residents.

We asked Mayor Jack O’Reilly’s spokesperson, Mary Laundroche, whether these disparities are a cause for concern.

“Oh my goodness no, there’s no east vs. west as far as the services we’re delivering to our residents,” she said. “Dearborn is one community. There is no difference between east and west and how services are delivered, how investment in the city is delivered. We’re totally committed to serving all our residents.”

Ziad Abdelmalak, a candidate for City Council, who was born and raised in the Southend before moving to the east side, sees this differently.

“It’s tempting to attempt to unify a city during a crisis,” he said. “We’d love to unify and see the city as One Dearborn. We’d love to see equality across the city. The reality is the Southend of Dearborn is a political farm. They come and see us every four years when our votes are ripe for the picking.”

For too long, city officials have glossed over these disparities, preferring a narrative of unity and civility over accountability and justice.

The mass flooding event sent a seismic shock throughout the city. What has emerged is a story of how class, ethnicity and local politics have collided to produce stark differences in how residents experience emergencies like this one. For too long, city officials have glossed over these disparities, preferring a narrative of unity and civility over accountability and justice. But these narratives, comforting though they may be, offer cliches and platitudes instead of the equitable solutions people need, such as equal representation in government, proportional investment in public goods and a city-wide commitment to road safety. Signs ask for help from Canada after flooding in East Dearborn

As the city prepares to elect a new mayor for the first time in 14 years, urgency is mounting to reconcile the image of Dearborn presented in brochures and city calendars with the bleak reality of how thousands of residents are living. Whether or not Dearborn makes history by electing its first ever Arab American mayor — a real possibility with three declared Arab American candidates — the next administration will have to work overtime to earn people’s trust.

As the sun set late one evening days after the storm, we watched an elderly woman rummage through a mound of someone’s discarded possessions and pull out a bag of sneakers. As she assessed each pair, we wondered what, if anything, might change in Dearborn if some of its leaders walked in those shoes.

— This article previously appeared in Bridge Magazine. It has been edited for style.