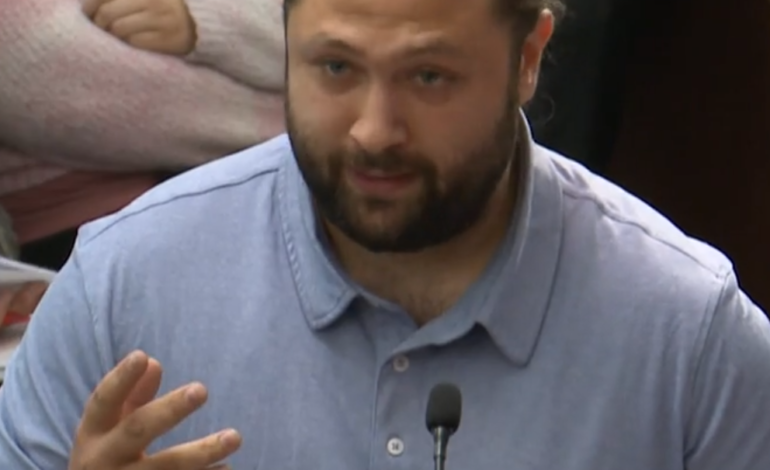 Resident Mike Hacham addressing his concerns over the mayor's ability to lead. Photo: Screenshot of the Dearborn City Council meeting

DEARBORN — During Tuesday’s nearly four and a half hour City Council meeting, residents voiced their concerns over the health of Mayor Jack O’Reilly.

After O’Reilly posted a recent statement on the city’s Facebook page, resident Mike Hacham produced documents to the Council on why the mayor is unable to continue in his role.

“What I am about to talk about is very sensitive and a very serious matter,” he said. “What I have passed out is answers to the questions I have been asking and the public has been wondering, ‘where is the mayor?’”

After wishing the mayor well, Hacham said there is a concern that O’Reilly is unable to make informed decisions due to his mental health. “I have a deposition from February 2019 that supports my claims,” he said. “In this deposition, the mayor was asked simple personal questions that he did not have the answers to or was struggling to answer and was answering incorrectly. For example, he was asked how many kids he has and he stated two, when in fact the mayor has three kids.”

Hacham went on to say that he prays for the mayor and his health.

“This is not in any way, shape or form meant to attack the mayor,” he said. “Again, my prayers are with the mayor. But I want to ask you, Council, uninterrupted, did you know about the mayor’s deteriorating health conditions? If you did know, why was this not disclosed to the public with the transparency we were promised?”

Hacham also said requests have been made for a federal investigation into the mayor’s transactions since 2019.

There’s no leadership, there seems to be incompetence, there’s no transparency. — Betsy Andreu

Resident Betsy Andreu said that O’Reilly’s decline in public speaking has raised a concern for her.

“Before COVID, there was no leadership from the city at all,” she said. “If it wasn’t for Wayne County Commissioner Sam Baydoun, we would have been left in the dark as to what was happening in the city; there was absolutely no leadership. Now, with the flood, we have the face of Dearborn which is Mrs. Dabaja, but she does not have any of the mayoral power. Yet you are the mayor and you don’t seem to be present. There’s no leadership, there seems to be incompetence, there’s no transparency. I would like to know if this is acceptable to the City Council?”

While neither O’Reilly nor anyone on the City Council responded to the comments, the mayor made a public statement on July 9 that he is managing a “health issue” that has impacted his ability to attend public engagements and make public comments, but that he continues to fulfill administrative responsibilities required by the city’s charter.

Councilman Mike Sareini told The Arab American News after the Council meeting that he requested a meeting to discuss this topic.

“Our interaction has not really changed,” he said. “To me, everything has been running the same. If I need to speak with him, he answers and he answers questions that I ask. I’m not a medical expert, but I did request a meeting to discuss if something is impairing his ability.”