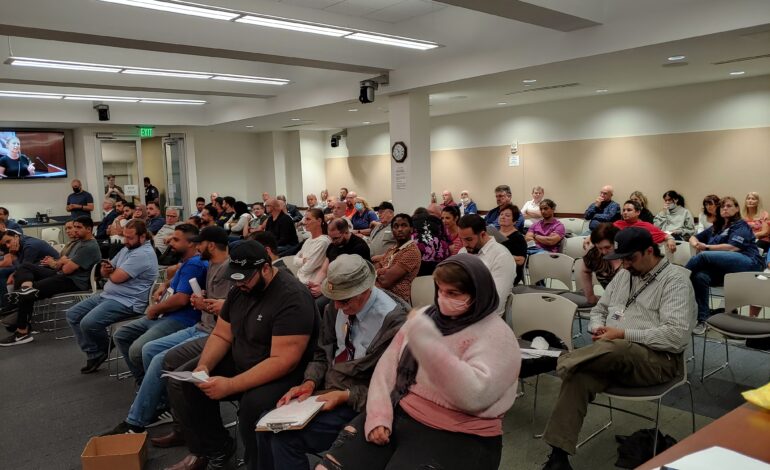 Residents sit through a nearly four and a half hour meeting to have their frustrations heard over the recent flooding that devastated the city. Photo: Briana Gasorski/The Arab American News

DEARBORN — With a packed agenda of 61 items for the City Council to address, residents filled the Dearborn Administrative Center (DAC) to make their voices heard.

With Council chambers at full capacity, residents were guided by the heavy police presence to overflow rooms where they could view the meeting on TV screens throughout the DAC. Later, at the end of the nearly four and a half hour meeting, the podiums were open to public comment.

Resident Shayma Ghaleb said that due to her home flooding, it isn’t safe for her to be there. “I have multiple sclerosis, I have gastroparesis and I have a tumor that’s stuck in my esophagus,” she said. “I am not able to sleep in my home anymore because of the bacteria that lies there. I’ve been sleeping at friends’ homes, hotels, family members’ homes and every time I try to get myself a doctor’s appointment or try to see a health department, I can’t even get an appropriate, timely appointment.”

Ghaleb said that as a disabled resident she believes the city should be doing more.

“I am also disabled, so as a disabled resident that’s been here my entire life, I don’t know what to do anymore,” she said. “I don’t know what my plan of assistance is as a young, disabled resident of the city. I have no room to sit here and complain about everything else that everybody else is complaining about when I am dealing with my health. Health is the truest of wealth and right now the city, I feel like, should be responsible for people that are in my situation. Two people died because of this flood, and I don’t want to die. I don’t want to die.”

Rick Jones said that his home flooded in 2014, 2018 and again this year with a sewer backup. “In 2014, there was a sewer backup in my home and nothing was done at that time to correct the problem,” he said. “In 2018, I had another backup in my home and nothing was done at that time either. In 2021, we had a pretty heavy rainstorm and I had another sewer backup with over a foot of water in my basement and black sludge. The heavy rains were predicted and water was from anywhere to a few inches to a lot of feet in people’s basements, along with that nice, smelly, black sewer sludge. Residents had to throw out a lot of their basement belongings, thousands of dollars worth of property. This city collects thousands of dollars in sewage fees. If those dollars are supposed to be for sewer projects, then why am I bailing out my basement every three to four years with sewer backup water?”

Jones also said that the situation is unacceptable.

“My home is depreciating in value. I couldn’t sell it if I wanted to, even in this hot real estate market, because people know it’s a flood problem,” he said. “I can’t put anything nice in my basement. You, as a Council, have failed us as citizens of this city because you are our voice to get things done, and you have done nothing.”

One resident argued with Council President Susan Dabaja over the purpose of a town hall that had been held in the days after the flood where city department heads were present to answer questions.

“It has nothing to do with personal preferences,” Dabaja said. “I’m here to serve and to do my job and I am trying to do so in the best way possible. When the flood occurred, I looked for ways to help our residents and to provide information and to be as transparent as possible, and if I’m going to be crucified for doing that or to be personally attacked for doing that, then so be it. I’m proud of the work that I did.”

Councilman Mike Sareini said that he understands the frustration.

“The residents are seeing this happen too frequently,” he said. “I said specifically that I did not agree with the engineers, but I could not get support. There will be a two-pronged approach to investigating this. We are going to request an investigation into what happened in June and an investigation into the sewer overall.”

While some residents are still unable to be in their homes, Sareini said he just hopes residents stay safe.

“I hope residents will continue to protect their homes and remain in safe environments,” he said. “I encourage everyone to take as many photographs and videos as possible and to document everything as much as possible, especially if FEMA provides relief. If FEMA does that, they would distribute funds directly to residents and reimburse the city for the cost of clean-up.”

Sareini also said he is proud to continue to be an advocate.

“I have tried to advocate to no avail, but I think with the new administration we will be able to get some resolution,” he said. “With the debris collection, we need to give residents an opportunity to dispose of what they want and give them benefits and services they deserve. I’m afraid that this will happen again, and when we see rain and people are scared, there’s a problem.”