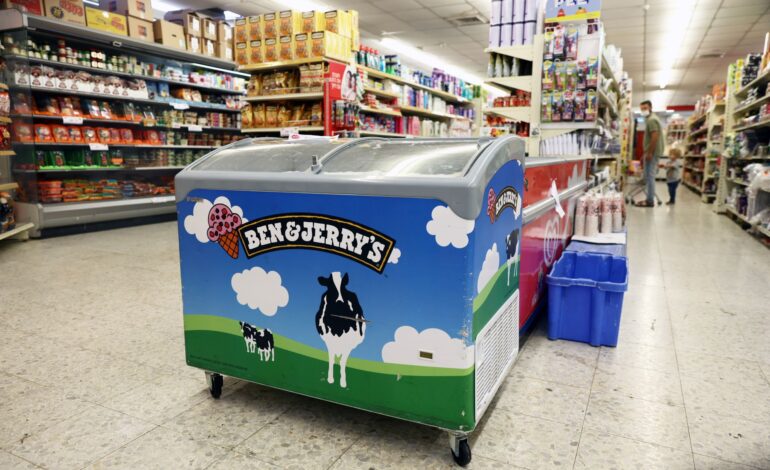 A refrigerator bearing the Ben & Jerry's logo is seen at a food store in the illegal Jewish settlement of Efrat in the Israeli-occupied West Bank, July 20. Photo: Ronen Zvulun/Reuters

After years of efforts by anti-occupation activists, the popular American ice cream company Ben & Jerry’s has halted sales of its products in the occupied Palestinian territories.

Activists in the Boycott, Divestment and Sanctions (BDS) movement and other pro-Palestine and anti-Israeli apartheid activists praised the decision, which was predictably met with condemnation from rightwing supporters of Israel’s occupation, including its latest government. Under international law, Israeli settlements on occupied Palestinian land are illegal.

Ben & Jerry’s said that its operations in occupied territories were “inconsistent” with its values. The company said it would not be renewing its license agreement with the Israeli manufacturer that produced its ice creams. But the company has said it will continue sales inside Israel.

“We warmly welcome their decision, but call on Ben & Jerry’s to end all operations in apartheid Israel,” BDS said on its Twitter page on Monday.

Following years of #BDS campaigns @benandjerrys has announced it will end sales of its ice cream in Israel's illegal settlements on stolen Palestinian land.

We warmly welcome their decision but call on Ben & Jerry's to end all operations in apartheid Israel.#BDSsuccess pic.twitter.com/0n1AjnPFaA

The company said it would “stay in Israel through a different arrangement”, raising eyebrows from activists, who says the company’s presence in Israel would inevitably require the ice cream company to operate in occupied East Jerusalem at the minimum, The Mid East Eye reported.

Israel outlaws boycotts of its settlements in the West Bank. Since 1987, licensee partner Ben & Jerry’s Israel has handled the company’s business in the region.

Ben & Jerry’s has been vocal about justice issues in the U.S., prompting pro-Palestine activists to urge the company to also stop selling ice cream produced in Israel in illegal settlements in the occupied Palestinian territories.

“Now we Israelis know which ice cream NOT to buy,” Netanyahu said in a tweet.

Israeli Foreign Minister Yair Lapid, who is in a potential power sharing deal with the country’s new right wing ruling party, called the decision “anti-Semitic” and called on U.S. states with laws against Israel boycotts to sanction Ben & Jerry’s.

“Ben & Jerry’s has decided to brand itself as the anti-Israel ice cream,” said newly-elected Israeli Prime Minister Naftali Bennett, who called the move “morally wrong” and vowed to fight it.

On Wednesday, the journalist Max Blumenthal commented on Israel’s calls of boycotting the ice cream brand just weeks after it destroyed Gaza’s most popular ice cream shop, a business that supported eight families.

“We have always recognized the right of the brand and its independent board to take decisions about its social mission,” the company said in a statement. “We also welcome the fact that Ben & Jerry’s will stay in Israel.”

But after days of pressure, Unilever’s CEO Alan Jope said on Thursday the company was “fully committed” to Israel.

“I think if there’s one message I want to underscore… it’s that Unilever remains fully committed to our business in Israel,” Jope told investors during an earnings call, adding, “This was a decision taken by Ben & Jerry’s and its independent board… and we always recognize the importance of that agreement.”

(This is) terrorism that seeks to harm Israeli citizens and the Israeli economy. We must oppose this boycott and terrorism of any kind. — Israeli President Isaac Herzog

Reuters reported U.S. State Department spokesperson Ned Price as declining to respond to Ben & Jerry’s decision, calling it “the actions of a private company.” Price instead reiterated the Biden administration’s opposition to the BDS movement.

“(This is) terrorism that seeks to harm Israeli citizens and the Israeli economy,” Herzog said. “We must oppose this boycott and terrorism of any kind.

Herzog said the BDS campaign does not pursue peace and seeks to undermine the very existence of the state of Israel.

“We welcome Ben & Jerry’s decision to stop doing business in what is internationally recognized as illegally-occupied territory,” said CAIR National Communications Director Ibrahim Hooper. “American corporations should not support Israeli violations of human rights and the breaking of international law.”