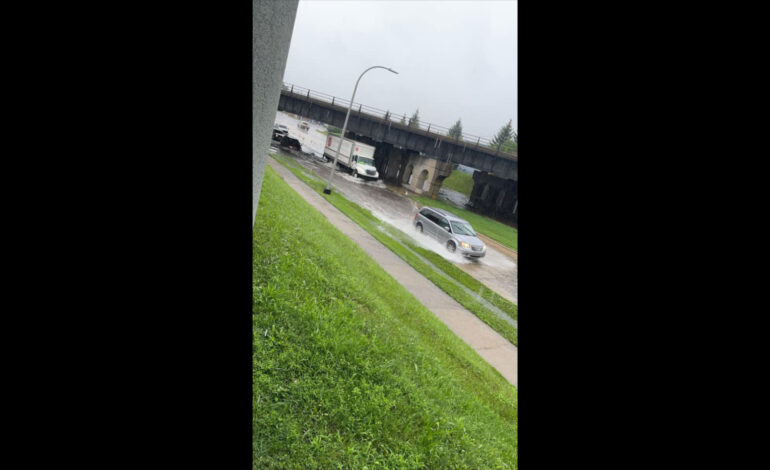 July 16 flooding in East Dearborn, at the intersection of Ford Road and Oakman Boulevard. Photo: The Arab American News

The Arab American News learned that approximately 100 homeowners in the area north of Hemlock Avenue between Schaefer and Miller Roads on the city’s east side reported 2-3 inches of water back up in their basements to the city.

The city’s rain gauges showed 4 inches of rainfall in three hours the morning of July 16, which also resulted in significant street flooding, especially in the low areas under viaducts. The city’s sewer system is designed to handle 3 inches of rain within 24 hours.

City engineering officials have have already warned of the limits to rainwater drainage capacities for the city area and of the increased likelihood of such rain events caused by climate change.

The Engineering Department says a solution to the problem of reoccurring flooding requires a study into the dynamics of rainfall and draining in the area of the Rouge River and its connections with the larger bodies of water in the area.

Dearborn is one of 43 community in the Rouge River watershed. A watershed is an area of land that drains all the streams and rainfall to a common outlet such as the outflow of a reservoir, mouth of a bay or any point along a stream channel.

Dearborn government officials have said that planning prevention strategies for such events means looking at broader issues related to climate change, and the recognition that development and actions in the communities in the Rouge River watershed can impact Dearborn, as the city is near the end of the river before it reaches the Detroit River.

Dearborn has said upstream development in the watershed, the historic high water levels in the Great Lakes and climate change have all contributed the greatest impact to the increased water elevations being experienced on the Rouge River in the vicinity of the two outfalls serving east Dearborn, the older part of the city that was hit hardest by the storms.