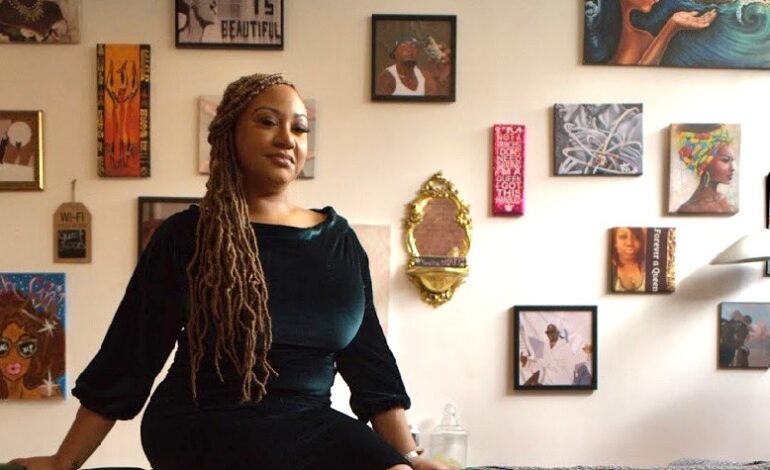 HAMTRAMCK— After only two months in operation, Esthi Queen Healing Spa, one of the city’s few Black-owned businesses, is facing a threat from the city to shut down after being denied a special land use zoning request in a decision the owner, Tiara Boyd, strongly believed was racially motivated.

On the evening of July 14, the seven members of the Zoning Board of Appeals (ZBA) publicly convened over Zoom to decide on Boyd’s application for a “use variance” request to legally operate the already opened salon. Public comments and a polarizing debate between ZBA members prompted questions of race as a deciding factor by those opposed to the zoning clearance.

After the meeting, Boyd took to social media to share her story, expressing shock and outrage, saying, “I am the ONLY Black spa in this city. All of the Arab men of the ZBA board voted AGAINST my business.”

Hundreds of people shared Boyd’s Instagram post and offered support for the business and indignation at  the board and the alleged racism.

Several residents of Florian Street and nearby blocks expressed concern that the spa’s location has caused public safety issues related to traffic, street parking availability and unease at the “type” of clientele the business attracts.

An esthetician, Boyd has been running her spa since 2018, previously leasing a suite in Southfield before moving to Hamtramck in March. She had her grand opening in May. The spa has since gained attention in local feature articles by Model D Media and the Michigan Chronicle. EQ Spa also collaborated with women’s apparel store, Tory Burch, at Somerset Mall in Troy.

The spa’s location is situated within an area zoned as a residential (R) district, which allows for a limited list of commercial and mixed uses to be requested from the ZBA. According to Section V -1.03 of the city’s zoning ordinance, the list of the special land use request includes a brewery, grocery store, bar and medical and dental clinic.

A spa/salon is not included as an explicitly permissible use within this residential district and therefore requires a variance hearing from the zoning board. The property is a mixed use building, with a residence dwelling for rent above the spa. EQ Healing Spa is located on the intersection of Florian St. and Brombach St., next door to Florian Dental Clinic and is also near Oakland International Academy, St. Florian Church and a liquor store.

Public comments were heard ahead of the ZBA members discussing the matter. Several residents of Florian Street and nearby blocks expressed concern that the spa’s location has caused public safety issues related to traffic, street parking availability and unease at the “type” of clientele the business attracts.

Since the public comments I couldn’t help but feel like there was this undercurrent of coded language about the business that is being discussed. And when I say coded language, I’m going to say that was bluntly racist undertones against the business — Eric Anderson, ZBA member

Boyd addressed the community concerns, clarifying the types of services the spa provides, including facials, manicures and mediation. Regarding parking and traffic, Boyd offered that the spa is only open from 10 a.m.- 5 p.m. and clients are served by appointment only with typically one to four clients at a time, a client base of women 16 and older.

She said the spa hosts community-centered events and sponsors local kids to summer camp every year. She also said she’d planned to move into the city to better be part of the community and better invest in the community and understand its dynamics.

Further, Boyd pointed out that the spa shares a spacious parking lot in the back of the building with the dental office, where clients can park.

The city’s economic development associate, Grace Stamper, was also present at the meeting and expressed support for the spa’s request in a July 6 memo addressing the variance criterion.

“Other commercial uses are allowed to operate in the residential district, especially in buildings that are designed for commercial use such as this one,” Stamper said. “A variance would allow the applicant to enjoy the right to operate a business in the commercial zone, particularly as it is not a controversial use but rather one which would benefit the neighborhood’s residents.”

A heated debate by the board occurred, namely between ZBA members Nasr Hussein and Eric Anderson. Hussein raised questions in opposition to the spa’s eligibility to meet the special land use criterion, particularly what he felt was Boyd’s inability to produce evidence of “hardship”, as delineated in the ordinance, should the zoning clearance be denied.

During the vote, Anderson said he firmly supported the spa and challenged those opposed, saying, “I am struggling to decide to whether or not I should even say this because it’s kind of a sad feeling if it’s true, but since the public comments, I couldn’t help but feel like there was this undercurrent of coded language about the business that is being discussed. And when I say coded language, I’m going to say that was bluntly racist undertones against the business.

“I think the way people approached their comments like, “oh, nothing against the business owners” is fairly coded, but not subtly. It’s saddening to me as a hypocritical decision when we have been fairly permissive as a board for things that don’t always perfectly meet the criteria, but meet the criteria well enough and have a direction. I fear if we don’t approve the request, it would be a hypocritical double standard and driven by prejudice.”

The ZBA voted 4-3 to deny the spa a use variance ordinance, narrowly missing the two-thirds vote needed for approval. After the vote, cheers were heard in the background in celebration of the decision.

ZBA members Malek, Hussein and Al-Harbi voted against the request, echoing resident concerns brought forth during public comment and “failure to provide evidence for hardship” should the location not be allowed the special land use due to zoning provisions.

Boyd has publicly cited a particular comment from the meeting she felt was coded anti-Black language: “I do not care about the parking, I can park three streets down. But I do care about the safety of my brothers and the safety of my fam. And I do not know about the people that would go to that business — how would they act, how would they drive.” Boyd mistakenly attributed the comment to a ZBA member, when it was actually spoken during public commentary by a Florian St. resident identified as “Abdul.”

On Wednesday, Boyd spoke to Fox 2 Detroit News about the incident and the discrimination she believed was at play by the board. The local media outlet ran the story,  in which the original post erroneously attributed the above comment to ZBA member Nasr Hussein, which further incensed tensions between members of the Black and Arab communities. The story was corrected on Thursday.

If anyone could listen (to the meeting), there was no discrimination at all. This creates problems because the mayor is running for reelection and we were opposed to her and they are just trying to give an excuse — Nasr Hussein, ZBA member

After the ZBA meeting, Mayor Karen Majewski took to Facebook to express frustration at the proceedings, saying, “Certain businesses and business owners and clients are encouraged, but certain others are not.”

During the ZBA meeting, Hussein claimed the spa was being given preferential treatment by the mayor due to connections with the city. When The Arab American News asked Hussein about Anderson’s claim that his position against the variance was racially motivated, he said, “I have no idea what he is talking about. But I suppose if anyone could listen to it, there was no discrimination at all. This creates problems because the mayor is running for reelection and we were opposed to her and they are just trying to give an excuse. We have an ordinance that the mayor thinks is unfair and she could easily meet tomorrow and change it.”

Hussein claimed the mayor, as a member of the Planning Commission, has the power to call for an emergency meeting to resolve the zoning ordinance to include a spa.

Mayor Majewski told the Arab American News that the process to change an ordinance is not necessarily quick or easy, but typically takes at least two months.

“To change an ordinance takes quite a bit of time,” she said. “We could call an emergency meeting to do that, but we would have to go through a reading, then a second reading before then being approved by Council. It’s not like something you can do overnight.”

I’ve found some of the language, both by the board members and members of the public who spoke, what I would take to be coded racist language. — Mayor Karen Majewski

When asked if she believed there was any truth to the allegations of discrimination against the Black-owned spa, the mayor said she viewed the meeting after learning Boyd was denied.

“I’ve found some of the language, both by the board members and members of the public who spoke, what I would take to be coded racist language.”

Boyd said she has acquired an attorney and is considering the avenues open for recourse. The spa is still open as she is still waiting for the denial letter from the city so that she may file for an appeal with the circuit court. But City Manager Kathy Angerer confirmed that Boyd should be receiving the denial notice on Friday.

Thousands of locals commented and shared social media in support of Boyd’s struggle as a Black-owned business, expressing outrage at the ZBA in a backlash against allegations of racism toward a Black-owned business. Boyd is planning a protest on Tuesday, July 27 at 6 p.m. in front of Hamtramck City Hall to raise more awareness. The City Council will be meeting there at that time.

Boyd has also launched a petition to “keep this Black-owned business zoned, not only open, but that reparations are paid to compensate for the myriad of damages suffered by Esthi Queen and customers.” The petition is currently at nearly 3,000 signatures, exceeding the onset goal of 100.

“I want people to be more open and accepting in this world that we live in now,” Boyd said. “You know, because though it made me feel like we were back in time, this is 2021. Catch up. Understand what’s really going on.”