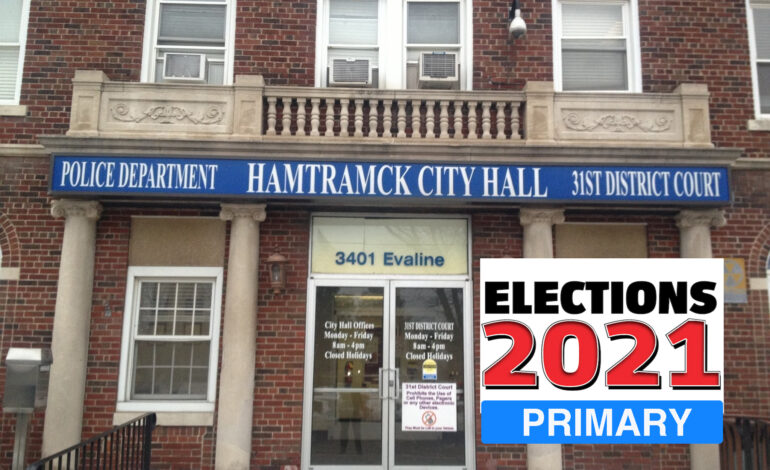 Four candidates for Hamtramck mayor and eight for City Council are vying for four-year terms and will face off in the Aug. 3 primary election, after which the mayoral race will come down to two candidates and the Council race to six.

The city is also asking voters to decide on a ballot proposal which would increase property taxes to fund its fire and police pension obligations.

The Hamtramck City Council has three open seats due to the resignations of Andrea Karpinski and, most recently, Ian Perrotta and the fact that Councilman Saad Almasmari, who was appointed to Karpinski’s seat after her resignation, has opted to run for mayor.

Almasmari, a longtime community figure who had previously served on the Council before losing his seat in the 2019 election.

Amer Ghalib, a local physician who announced his decision to run early on. Mahmoud’s Facebook profile says he works for the Detroit Medical Center and Wayne State University.

Asm “Kamal” Rahman, who ran for mayor in 2017 and has sat on boards of prominent civil rights groups. He is an outspoken participant in the city’s public debates.

Finally, Mayor Karen Majewski will seek another term. If elected, she will become the city’s longest-serving mayor. Majewski served on the City Council as its president and mayor pro-tem before being elected as Hamtramck’s first woman mayor in 2005 and has won every mayoral race since.

Amanda Jaczkowski, who is completing her master’s degree in public administration at Wayne State University.

Lynn Blasey, who has an educational background in Middle Eastern history, art history and communications.

Armani Asad, a local artist who studied at The Arts Institute.

For the average homeowner, the millage increase would cost an extra $300 to $400 a year in property taxes. The average taxable valuation for a residential parcel in Hamtramck was around $18,000 in 2016.

The proposal looks to maintain that millage levy for the next 20 years.

A majority of Hamtramck voters previously voted against a similar proposal. But the pensions are part of a labor contract between the city and fire and police unions, meaning the city is obligated to pay for the cost of the system regardless of whether this proposal passes.

The Hamtramck Review noted last month that Hamtramck’s current half mill raises only a little over $103,000 a year towards the total costs of the retirement system. The city’s actual cost is more than $2.2 million a year, which comes out of the city’s general budget.

The city is running out of options to combat the shortfall. If the proposal fails — which will likely occur, based on the previous election — the city would have to look towards the state for a solution. Some have speculated that this could mean another receivership. Another scenario, which would increase costs for taxpayers anyway, would be pensioners filing a lawsuit, leading to a judge putting a lien on property taxes to pay for the retirement obligation.