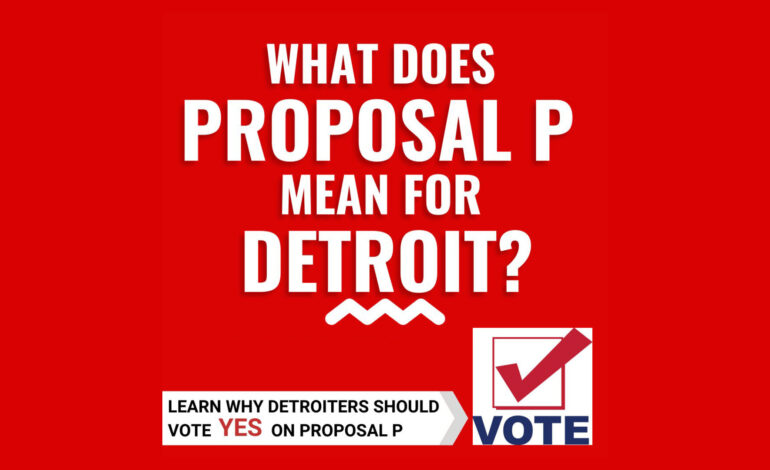 – Hayg Oshagan is a professor at Wayne State University, co-chair of the Detroit City Council Immigration Task Force and the director of New Michigan Media

On Tuesday, August 3, Detroiters will have the opportunity to vote YES on Proposal P. Prop P is the set of revisions that are being proposed to the Detroit City Charter. The Charter is the rules of the city that no mayor or City Council can change. And this is an important vote for all of us in Detroit, because the Charter is revised very rarely. As co-chair of the Detroit City Council Immigration Task Force, Task Force members and I worked for many months with over 20 Detroit immigrant community organizations, a broad team of Detroit community leaders and the Detroit Charter Revision Commission to help make the proposed changes to the Detroit City Charter. Hayg Oshagan, Wayne State University professor and director of New Michigan Media, speaks at a press conference held by the Detroit Charter Revision Commission in front of the Coleman A. Young Municipal Center in Detroit on Wednesday, April 28. Photo courtesy: The Detroit News

The new Charter in Prop P is a powerful revision that safeguards the basic rights, the human rights, of all Detroiters. It increases transparency in city government, demands greater accountability from the administration and encourages engagement and participation of Detroit residents in government. That is why it is called the People’s Charter.

There is much in the Charter revision, but some of the highlights include:

For our immigrant communities, the changes in the Charter are substantial. The new revisions establish an Office of Immigrant Affairs, with a director, to help the city address issues of immigrants. The new Charter also creates an Immigrant and Refugee Affairs Commission, composed of Detroit residents, to act as an advocate and liaison for immigrant communities and the city. The Charter also requires the city to publish all city forms and materials in multiple languages (including Spanish, Arabic and Bangla), and have translators for city services. And finally, the new Charter prohibits Detroit Police from helping on federal immigration law enforcement (ICE, CPB, Homeland Security, etc.) – federal agencies are the ones who should be dealing with immigration, not city police.

You may have seen the expensive advertising campaign that Proposal P will drag Detroit into bankruptcy. Despite multiple requests, not a single analysis or accounting has been provided by the Mayor’s Office for that claim. The Charter Commission, on the other hand, enlisted a Michigan State University economist to evaluate the costs of the proposals, whose analysis determined that all the revisions would be easily affordable by the city.

We have a chance on August 3 to make real and positive changes to the rules of Detroit. Changes that help every resident of the city, rules that help all of our immigrant communities and a new Charter that lets all Detroiters live with greater dignity, more security and with a louder voice in city government. This is what good governance is about and this is what Proposal P, the People’s Charter, is about. You do not need to be a U.S. citizen to vote on August 3, you only need to be living in Detroit. Vote to make the change. VOTE YES on Prop P.

Dearborn voters should vote YES on Proposal A

The little talked about COVID-19 “variants”: Vaccine mismanagement will have dire repercussions