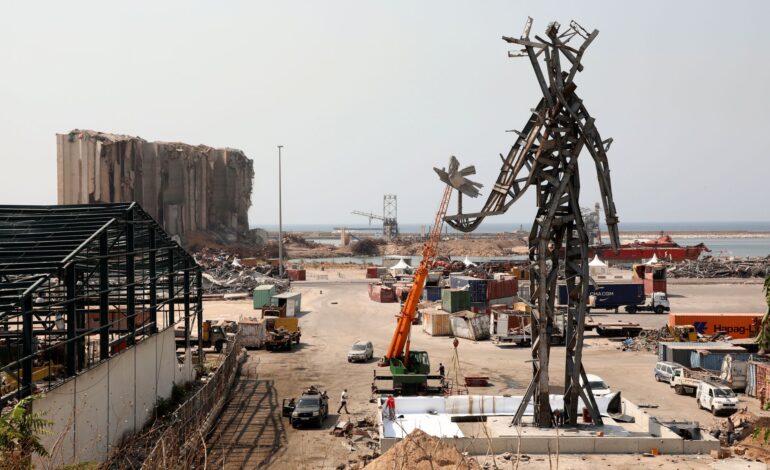 The Gesture, a 25-meter sculpture by Lebanese architect Nadim Karam to commemorate victims of last year's Beirut blast, is seen at the capital's port in Lebanon, July 30. Photo: Mohamed Azakir/Reuters

BEIRUT — A report released by Human Rights Watch (HRW) on Tuesday concluded there was strong evidence to suggest some Lebanese officials knew about and tacitly accepted the lethal risks posed by ammonium nitrate stored at Beirut port before the fatal blast there on Aug. 4 last year.

HRW called for a U.N. investigation into the explosion, which was caused by the chemicals stored unsafely at the port for years and killed more than 200 people, injured thousands and destroyed swathes of Lebanon’s capital.

The report by the international rights watchdog contained over 700 pages of findings and documents. Its investigation also concluded there was evidence that multiple Lebanese authorities were criminally negligent under Lebanese law.

HRW said President Michel Aoun, caretaker Prime Minister Hassan Diab, Director General of State Security Tony Saliba and other former ministers wanted for questioning by Judge Tarek Bitar had failed to take action to protect the general public, despite having been informed of the risks.

Reuters sought comment on the report’s findings from Aoun, Diab and Saliba.

The presidential palace offered no comment. Saliba said his agency did all it could within its legal remit, filing legal reports to warn officials, and had an office open at the port only months before the blast. There was no immediate response from Diab.

Aoun said on Friday he was ready to testify and that no one was above the law.

HRW based its report on official documents it reviewed and on multiple interviews with top officials, including the president, the caretaker prime minister and the head of the country’s state security.

The investigation trailed events from 2014 onwards after the shipment was brought to Beirut port and tracked repeated warnings of danger to various official bodies.

“Evidence strongly suggests that some government officials foresaw the death that the ammonium nitrate’s presence in the port could result in and tacitly accepted the risk of the deaths occurring,” the report said.

It called on the United Nations Human Rights Council to mandate an investigation into the blast and on foreign governments to impose human rights and corruption sanctions on officials.

A Lebanese investigation into the blast, led by Bitar, has stalled. Politicians and senior security officials are yet to be questioned and requests to lift their immunity have been hindered.

A document seen by Reuters that was sent just over two weeks before the blast showed the president and prime minister were warned about the security risk posed by the chemicals stored at the port and that they could destroy the capital.