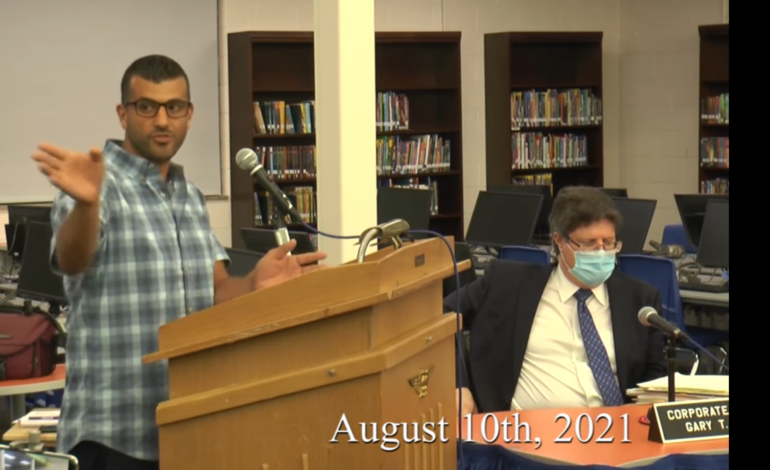 The tensions began when Mayor Bill Bazzi mentioned that he had requested a closed session to discuss a few items, which were continually denied by Council Chairwoman Denise Malinowski-Maxwell.

The items Bazzi wanted to discuss in closed session included the locks being changed on the Council chambers and conference room in City Hall without his knowledge and a Facebook post made by Malinowski-Maxwell regarding conversations with GFL following the June floods.

Malinowski-Maxwell claimed that the situation with GFL was blown out of proportion because of who she is.

At that point, resident Hassan Saab can be heard on the recording calling her a liar, to which her fiancé and attorney, James Fett, can be heard asking Saab if he’s always so rude and calling him a “f—head.”

Both men were then taken to the hallway by Dearborn Heights police officers, but were allowed to come back if they agreed to keep the peace.

After Bazzi finished speaking, Malinowski-Maxwell read a letter obtained by The Arab American News that says Bazzi was requesting Corporation Counsel Gary Miotke to sue Malinowski-Maxwell because she is investigating whether he has been writing off water bills for supporters of his mayoral campaign. The letter also claimed that city employee Hassane Jamal and Bazzi are “anti-woman.”

Councilman Tom Wencel tried calling for a point of order and motioned to adjourn the meeting, but was denied, left the meeting and did not come back.

If I would have threatened him, as an Arab American, (I would’ve have been arrested) and still be in jail. – Hassan Saab

The meeting seemed to calm down after this until the public comment section.

“Protecting women’s rights and respect for women comes from my deep culture,” Jamal said during public comment. “Respect to my sisters, to my mother, to my wife, it doesn’t come because I want people to like me. I respect women because this is how I grew up. This is how I’ve been cultured. I protect their right, not by talking about it, but by doing it.”

As Jamal ran out of time, Malinowski-Maxwell requested to speak to him outside of the meeting, to which he replied that he would only accept a public apology as allegations had been made publicly.

Saab got up to speak after Jamal and directed his comments towards Malinowski-Maxwell.

“My comments are about the comments on Facebook from your boyfriend/attorney about the racist comments he made about Black residents in Dearborn Heights,” he said. “Is that something you agree with?” I do know something else, and my truth is this, BLM is a terrorist organization – James Fett

Malinowski-Maxwell said it was not, that she herself has not seen any evidence of that on Facebook and that Fett has no say over her opinion.

Saab approached the table and showed screenshots of the comments, to which Malinowski-Maxwell said she was unsure if that was in fact Fett’s account as “his account was cloned at one point.”

Saab continued to ask questions about the comments on Facebook and Malinowski-Maxwell then accused him of making a fake profile with Fett’s information.

“It’s amazing how you keep looking and smirking all the time and you accuse everybody but yourself,” Saab said. “You’re such a disgrace to this community.”

At the end of public comment, Fett took to the microphone.

“I didn’t see your little Facebook post that you got, but I know one thing, I’m no racist,” he said. “But I do know something else, and my truth is this, BLM is a terrorist organization.”

Fett went on to say that BLM is thinking of how they can kill police officers and that he sues them on behalf of people and that he represents African Americans and Arab Americans in his capacity as a lawyer.

Saab told The Arab American News after the meeting that Fett had actually called him a “f—ing Arab” and threatened to shoot him.

“He threatened to shoot me in front of police,” he said. “I went to file a police report and they told me it’s not going anywhere. If I would have threatened him, as an Arab American, (I would’ve have been arrested and) I’d still be in jail.”

Fett told The Arab American News that he is not racist, nor did he make threats against anyone. “My hostility towards BLM does not make me a racist,” he said. “I categorically deny threatening to shoot anybody after calling he/she a ‘f—ing Arab.’ There are police witnesses. It certainly is not in my character to do that, and I am certainly smart enough not to do that in Dearborn Heights with police all around. I would like to further comment that the spectacle and the false accusations were created by Bazzi and thugs to divert attention away from Bazzi’s write off of water bills of about $30k for one of his large campaign contributors.”

Police Chief Mark Meyers confirmed to The Arab American News that an investigation is ongoing.

“Related to the disturbances at the August 10 Council meeting, the safety and security of all persons in attendance was of the utmost importance,” he said. “Our officers were able to quickly deescalate the confrontation between individuals in attendance to gain orderly compliance, allowing the meeting to continue safely on two separate occasions. On August 11, a report was filed at the Dearborn Heights Police Department by a person in attendance and will be investigated appropriately.”

Malinowski-Maxwell said that these “attacks” are because of her investigation into the water bills and her opposing Bazzi in the mayoral election.

“As I have previously indicated, I am under attack from the mayor and certain Council members because of my investigation of the mayor’s write off of water bills, including the bill of a campaign donor,” she told The Arab American News in a statement. “Preliminary analysis reveals that write-off to be approximately $33,000.00.  There are more write-offs. Through my attorney, I asked the mayor for an accounting.  No response. Because I am opposing him in the election and investigating possible corruption by him, the mayor has weaponized the City Attorney’s Office.  He has used the city attorney to find opportunities to attack me.”

Malinowski-Maxwell also said her fiancé was in attendance at her request.

“When the meeting started I noted that all of the mayor’s allies that regularly heckle me from the audience were there,” she said. “They were rude as usual. ​My fiancé, Jim Fett, was in the audience for the second straight meeting at my request because I was physically afraid of some of the mayor’s cronies who attend meetings, including Sam, who at a Zoom meeting threatened to ‘make me cry.’ I also wanted his support because I am the frequent subject of attack and disrespect by the mayor’s cronies, certain of his employees and certain Council members.”

Malinowski-Maxwell said she stands by her comments on Jamal and that her fiancé is not a racist, but that Saab was the aggressor.

“He is not a racist” she said. “Opposition to BLM is not racism. Mr. Fett opposes BLM because he believes that they unfairly taint law enforcement, they are Marxists, they are corrupt and they ‘cancel’ people, including his clients. Mr. Fett did not threaten to shoot anybody, including Saab, who was at all times the aggressor picking a fight with a man 26 years his senior. Mr. Fett did not call anybody a ‘f—ing Arab’ and never would. All of this nonsense is because the mayor wishes to divert attention from his possible corruption.”

Many in Dearborn, surrounding communities, still out of power; dry ice available 1-6 p.m. for Dearborn residents