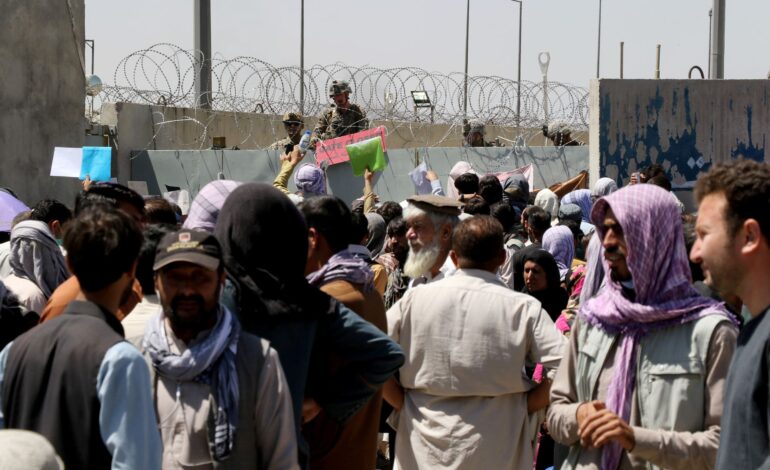 Crowds of people show their documents to U.S. troops outside the airport in Kabul, Afghanistan, August 26. Photo: Reuters/Stringer

Suicide bombings claimed by ISIS killed dozens at the crowded Kabul airport gates on Thursday, causing havoc and chaos during the final days of the Western airlift of its allies.

Kabul health officials were quoted as saying 60 civilians were killed, including children. Earlier reports said at least 52 were wounded, while witnesses spoke of many more bodies. A surgical hospital run by an Italian charity said it was treating more than 60 wounded. A watery ditch by the airport fence was filled with blood-soaked corpses, some being fished out and laid in heaps on the canal side while wailing civilians searched for loved ones

Video images uploaded by Afghan journalists showed dozens of bodies of people killed in tightly packed crowds outside the airport. Medical and hospital staff bring an injured man on a stretcher for treatment after two blasts outside the airport in Kabul on August 26,. Photo: Wakil KOHSAR/AFP

U.S. officials said 13 U.S. Marines were killed in the blasts. The number is believed to be the most U.S. troops killed in Afghanistan in a single incident since 30 personnel died when a helicopter was shot down in August 2011.

President Biden vowed to go after the perpetrators of Thursday’s bombing and said he had ordered the Pentagon to plan how to strike ISIS-K, the ISIS affiliate that claimed responsibility.

ISIS-K said it had carried out the attack, which killed dozens of people — including Afghans who were trying to leave the country and at least a dozen U.S. service members.

In claiming responsibility, ISIS said a suicide bomber “managed to reach a large gathering of translators and collaborators with the American army at ‘Baran Camp’ near Kabul Airport and detonated his explosive belt among them, killing about 60 people and wounding more than 100 others, including Taliban fighters.”

A Taliban official told Reuters the group arrested an ISIS fighter at the airport a few days ago and under interrogation he told them about plans for attacks. In response, the Taliban said it postponed gatherings in public places and advised its top leaders not to gather.

The explosion took place amid the crowds outside the airport who have been massing in hope of escaping in an airlift, which the U.S. says will end by Tuesday, following the swift capture of the country by the Taliban.

Several Western countries said the airlift of civilians was now effectively over, with the U.S. having sealed the gates of the airport, leaving no way out for tens of thousands of Afghans who worked for the West through two decades of war.

U.S. commanders are bracing for more attacks by ISIS, including possibly rockets or vehicle-borne bombs targeting the airport. A social media photo shows crowds of people waiting outside the airport in Kabul, Afghanistan, August 25. Photo: DAVID_MARTINON via Twitter

Mohammad Tawfiq, a resident of the Yaka Toot area adjacent to the military section of the airport, told Reuters that a canal near the airport was filled with the bodies of the dead and wounded.

A witness who gave his name as Jamshed said he had gone to the airport in the hope of getting a visa to reach the U.S.

“There was a very strong and powerful suicide attack, in the middle of the people,” he said. “Many were killed, including Americans; many were killed and many injured.”

Pentagon Press Secretary John Kirby confirmed on Twitter a “complex attack” at the Abbey Gate caused a number of U.S. and civilian casualties. At least one other explosion occurred at or near the Baron Hotel, a short distance from Abbey Gate.

Taliban official Suhail Shaheen said earlier on Thursday, “I confirm two explosions in the assembly of people in the area managed by U.S. forces have occurred. Initial reports say 13 persons have been killed and 52 wounded. We strongly condemn this gruesome incident and will take every step to bring the culprits to justice.”

The Taliban did not identify the attackers, but a spokesman described them as “evil circles” who would be suppressed once the foreign troops leave. A Taliban official said its guards securing the airport were among the wounded.

The Taliban has encouraged Afghans to stay, while saying those with permission to leave will still be allowed to do so once foreign troops leave and commercial flights resume.

Western countries have evacuated nearly 100,000 people, mostly Afghans who helped them, in the past 12 days. But they acknowledge that many thousands more will be left behind following President Biden’s order to pull out all troops by Aug. 31.

Canada and some European countries have already shut their airlifts down. The last few days of the airlift likely being used to withdraw the remaining troops.

“While it is likely to be denied publicly, the terrorist attack is also likely to mark the de facto end of the formal U.S.-led noncombatant evacuation operation,” William Wechsler, a former senior U.S. Defense Department official, said on Thursday. “The deadline of the end of the month is fast approaching anyway and the necessary operational pause that will ensue from the bombing will likely eliminate the last vestiges of hope (remaining) in the tens if not hundreds of thousands of Afghans who are desperate to flee the country.”

Thursday’s blast caused a planned meeting between Israel’s new Prime Minister Naftali Bennett and Biden to be postponed till Friday.

We wish we could have stayed longer and rescued everyone — General Wayne Eyre, acting chief of Canada’s defense staff

There was no indication from the White House that Biden plans to change the Aug. 31 withdrawal target as a result of the attacks, a source familiar with the situation told Reuters on Thursday.

Allied countries that fought alongside U.S. forces for 20 years in Afghanistan have been wrapping up their evacuations while publicly lamenting Washington’s haste in pulling out. “We wish we could have stayed longer and rescued everyone,” the acting chief of Canada’s defense staff, General Wayne Eyre, told reporters, as Canada announced it could no longer continue its airlift, having pulled out 3,700 Canadians and Afghans.

Norway said it could not evacuate anyone else as the entrances to the airport were shut.

Biden ordered all troops out of Afghanistan by the end of the month to comply with a withdrawal agreement with the Taliban negotiated by his predecessor, former President Trump. He spurned calls this week from European allies for more time.

The abrupt collapse of the Western-backed government in Afghanistan caught U.S. officials by surprise and risks reversing some gains, especially in the rights of women and girls, millions of whom have been going to school and work, once forbidden under the Taliban. But the U.S. invasion and occupation of the country, known to be America’s longest war, also caused some 47,000 Afghan civilian, 66,000 Afghan national military and police and almost 2,500 U.S. services members’ casualties.

Biden has defended the decision to leave, saying U.S. forces could not stay indefinitely. But his critics say the U.S. force, which once numbered more than 100,000, had been reduced in recent years to just a few thousand troops, no longer involved in fighting on the ground and mainly confined to an air base.

It was a fraction of the size of U.S. military contingents that have stayed in places such as Korea for decades.

Protesters in D.C. chant names of murdered Gazans ahead of Bennett, Biden talks