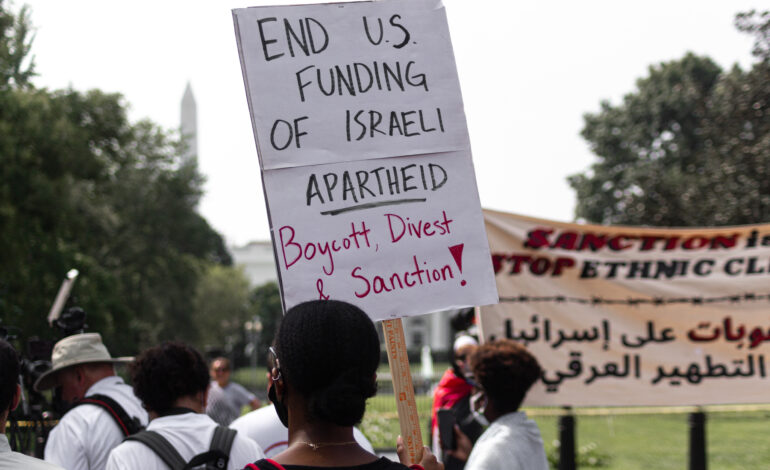 Protesters gather in front of the White House ahead of a planned visit by Israeli PM Naftali Bennett. Photo: Laura Albast

A small crowd of about 50 people, including multiple organizations like the Palestinian Youth Movement, U.S. Campaign for Palestinian Rights, Jewish Voice for Peace Action and the Council on American-Islamic Relations (CAIR), gathered in Lafayette Square ahead of a meeting between President Biden and Bennett, which was subsequently delayed to Friday, after the White House was forced to address suicide bombings at the Kabul airport in Afghanistan in a chaos-ridden final pull out from the country.

The organizers said in a release that they were demanding “an end to the Israeli government’s ongoing and systematic violations of Palestinian human rights and the Biden administration’s unconditional support for Israeli apartheid.”

The protesters called for an end to U.S. military and diplomatic support of all human rights violations, including an immediate halt to forced expulsions of Palestinians from their homes in Jerusalem, and a suffocating siege of Gaza.

“Biden is actively endorsing a right-wing leader of an apartheid state,” said Laura Albast, an organizer with the Palestinian Youth Movement. “The visit indicates that ‘the peace process’ is not about peace — it is about continuing Israeli expansion at the cost of Palestine and its people. The events of the past three months signify a new era of youth organizing for Palestine. We will not back down and will continue resisting to call for an end to forced expulsion, demolition, administrative detentions and ethnic cleansing.”

While Bennett’s government is stalling reconstruction in Gaza — following Israel’s murder of 265 Palestinian civilians in Gaza — the Biden administration refuses to hold its flow of U.S. military aid and weapons to that state — Nihad Awad, CAIR

The organizers pointed out that the Biden administration protected Israel’s impunity on the international stage by opposing a ceasefire during Israel’s onslaught on the Gaza Strip and an investigation into Israel’s violations of human rights.

Contrary to campaign promises, the Biden administration upheld Trump-era policies including maintaining the U.S. Embassy to Israel in Jerusalem and recognizing Israeli sovereignty over the annexed Golan Heights.

“The administration’s hypocrisy has also been prevalent when it comes to the so-called deal of the century,” the release read. “Last year, Biden tweeted that Trump’s roadmap to peace was ‘not the way’, yet the White House statement affirms that the administration is committed to the sham plan towards ‘peace, security and prosperity’ that excludes Palestinian voices and the right to self-determination.”

Since taking office earlier this year, Biden has approved increased weapons deliveries to Israel despite congressional opposition. The organizers had anticipated that during the meeting, Biden would likely provide unconditional support to Israel’s systematic policies of settler-colonial violence against the Palestinian people.

“While Bennett’s government is stalling reconstruction in Gaza — following Israel’s murder of 265 Palestinian civilians in Gaza — the Biden administration refuses to hold its flow of U.S. military aid and weapons to that state,” said Nihad Awad, executive director of CAIR. “It is incumbent that President Biden demand Israel immediately halt its killing of Palestinian protesters, confiscation of Palestinian land and cease interfering in the reconstruction of Gaza.”

Albast told The Arab American News that security was high at the protest, with a larger police presence than any the organizers had seen in previous protests. After being kicked off the White House lawn, protesters marched towards the hotel Bennett was staying in, where they read the names of the those killed in the Gaza onslaught in May.

Bennett ended his predecessor Benjamin Netanyahu’s 12-year reign this year. He is a wealthy leader of a West Bank settlement organization and has publicly made flagrantly anti-Arab comments in the past. Much of his meeting at the White House is anticipated to center on Iran and the administration is not likely to push Bennett on annexation, though Biden has previously said he finds continued settlement building to be detrimental to peace.