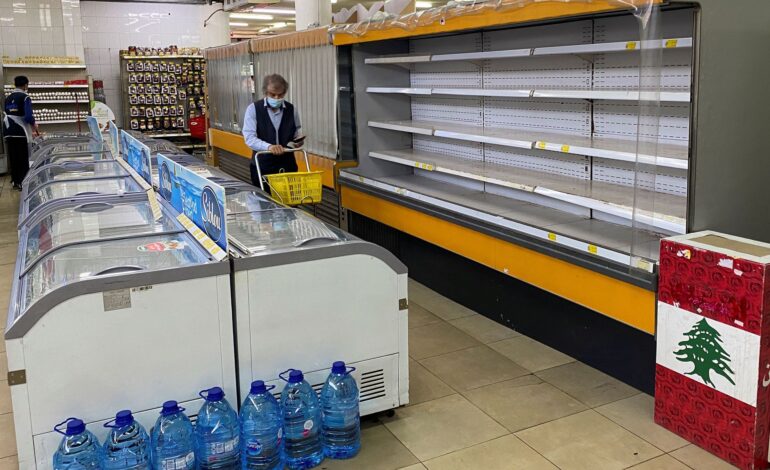 A shopper walks past an empty shelf at a supermarket in Hammana, Lebanon, Aug. 22. Photo: Mohamed Azakir/Reuters

BEIRUT — Ibrahim Jaber was laid off when the fast food restaurant where he worked as a chef in Beirut shut down. Unable to find another job, he had to take his daughter out of school to put food on the table at home.

He is one of many Lebanese who have found themselves facing staggering inflation just as their employers, also hit by the country’s spiraling financial crisis, cut back or closed.

“I will not register my daughter in school, I can’t afford it,” Jaber said. “The owners (of the restaurant) used to give us a fund for school, now we don’t get it.”

Those who kept their jobs have seen the real value of their salaries dramatically reduced as the currency has lost around 90 percent of its value against the dollar in the past two years.

“I would rather work anywhere in the world, even just picking up garbage, than stay in this country,” Jaber said.

Experts are warning of hyperinflation if Lebanon’s deeply divided politicians do not form a government soon to tackle a financial crisis which began in 2019 and threatens to destabilize a country torn by civil war in 1975-90.

The World Food Program (WFP) says food inflation has risen by as much as 557 percent since October 2019.

“We are talking one in five people or families struggling to put food on the table,” WFP spokeswoman Rasha Abou Dargham said.

Many families she visits on a regular basis are choosing to skip meals to feed their children while others are relying on the goodwill of nearby bakeries to send them free food every once in a while in order to cope.

With the cost of living rising steeply, the caretaker government has promised employees various bonuses, including an increase in their transport allowance by 16,000 Lebanese pounds a day, less than a dollar at the current market rate.

Some economists argue this will only add to the inflationary cycle and eventually lead to hyperinflation if sustainable reforms are not implemented.

“As soon as you get into that cycle whereby you have cost of living adjustments… but you don’t have any more revenue to fund them, you’re just printing money, then that creates a vicious cycle,” Nasser Saidi, a leading economist and former minister, said.

Officials from the caretaker government were not immediately available to comment.

Inflation was one of the main reasons behind Ali Hammoud’s decision to shut down his popular Classic Sandwich restaurant where Jaber used to work, cooking in-house and takeaway orders.

With fewer and fewer customers as prices went up, Hammoud had to pay more and more for fuel to keep his private generators running in the absence of state electricity and to keep his delivery bikes on the road.

He now plans to move his business somewhere out of Lebanon, saying he had delayed the decision despite mounting problems because he was worried about how his 230 employees would manage.

“That’s 230 families without income now and I don’t think they can find another job,” he said.

Food importers warn shortages could hit soon as they are increasingly unable to afford the stock. Some supermarket aisles already have large empty spaces.

Hani Bohsali who heads the Syndicate of Importers of Foodstuffs, said he was pretty sure many companies had already reduced imports, although it would take a while to show up in official data.

“There is no master plan,” he said.

In one Beirut supermarket, customers were returning many items to the shelves after checking the price.

“This is the truth today; there are people who can’t afford to eat,” one shopper, Naja Shallita, said. “I don’t know where we’re heading.”