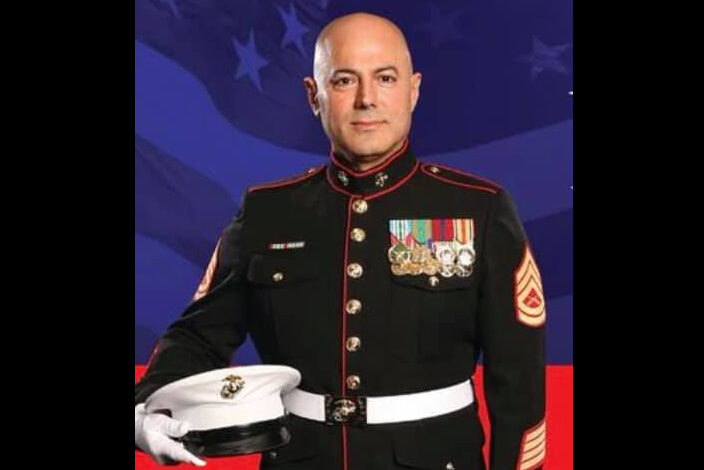 Bazzi served four years in the Marine Corps and 17 years as a reserve officer before retiring in 2016 as a gunnery sergeant.

The allegations came forward at the Aug. 24 City Council meeting when resident Dana Parish brought up a conversation he’d had with Council Chairwoman Denise Malinowski-Maxwell.

“I was told by a member a while back that they suspected that the mayor did not go by his legal name, in other words that his name was not Bill Bazzi and that he was not a United States Marine,” Parish said. “I want to quell that right now.” Parish then displayed photographs of awards Bazzi received during his time with the Marines.

“I really don’t like to see someone’s name be used in saying basically that he wasn’t a Marine,” he said. “I was a captain in the Army, and I have proof of that. It kind of hurt me a great deal when this person said that he wasn’t a Marine, but I checked it out. The person that made the accusation was the Council chair and this was before the mayor was the mayor.”

He then requested Bazzi show his military ID, which he did.

“I’m actually speechless,” Bazzi said. “Obviously I’m a Marine, unless I was sleeping for 21 years. It’s an insult, not just to me, but my brothers and sisters serving in the military, especially right now with everything going on overseas. I’m actually very disgusted.”

Bazzi shared a letter he received from the U.S. Office of Special Counsel (OSC) with The Arab American News.

This is not only disrespectful to me, but to all who have served before me, those who continue to serve today and those who died for our country, along with the loved ones they leave behind. — Mayor Bill Bazzi

The letter states it was sent in response to a complaint filed with the OSC alleging that he was violating the Hatch Act by running for mayor while wearing his military uniform in campaign photographs.

“As explained below, OSC is closing this matter without further action,” the letter read. “The Hatch Act applies to certain state and local employees who are principally employed by state, county or municipal executive agencies in connection with programs financed in whole or in part by loans or grants made by the United States or a federal agency. Employees who are covered by the Hatch Act may not use their official authority or influence for the purpose of interfering with or affecting the result of an election or nomination for office or coerce, attempt to coerce, command or advise a state or local officer or employee to pay, lend or contribute anything of value for political purposes. In addition, those employees whose salaries are entirely federally funded may not be candidates in partisan elections for public office.”

The letter went on to explain that the candidacy prohibition does not apply to the mayor of a city, so even if the salary as mayor is entirely federally funded, the Hatch Act does not prohibit Bazzi from being a candidate in the mayoral election.

“It was also alleged that you are violating the Hatch Act by using photographs of yourself in your military uniform for campaign purposes,” the letter said. “While the Hatch Act governs the political activity of federal civilian executive branch employees, it does not apply to members of the uniformed services, including former or current reservists. Accordingly, this alleged activity does not violate the Hatch Act and we are closing our file.” Parish told The Arab American News that as a former service member himself, the comments were disgraceful.

“I have a great respect for her,” he said of Malinowski-Maxwell. “But I just wish they’d work together. It’s a shame and it’s ridiculous.”

Bazzi told The Arab American News that these allegations are disrespectful.

“It’s disturbing that someone would use my military status, my Marine Corps uniform and 21 years of service for a malicious, negative purpose and for personal political gain,” he said. “This is not only disrespectful to me, but to all who have served before me, those who continue to serve today and those who died for our country, along with the loved ones they leave behind. Listening to one of our concerned residents, Mr. Dana Parish, describe what the Council chair told him about my military service, claiming that I was an imposter, disturbed me to the core.”

Since the accusations came to light, Bazzi said he has received great support from the community.

“I appreciate the outpour of calls and visits that I have received from countless residents and those whom I have served with over the years, who are just as appalled by the ongoing false and erratic accusations and stand in support of my service to our country and the people,” he said. “Unfortunately, this appears to be another politically charged attempt by my opponent, who is also running for mayor, to distract, discredit and eliminate me from running for mayor, by making continuous false and reckless accusations. Despite these attempts, I will continue to focus on our city and work for the interest of our residents.”

Bazzi also served as president of the Ford Motor Company Veterans Network Group and currently serves as commander of the Dearborn Allied War Veterans Council and as a member of the Disabled American Veterans and the Marine Corps League. He also mentors for the Veterans Court and volunteers at the VA hospital.