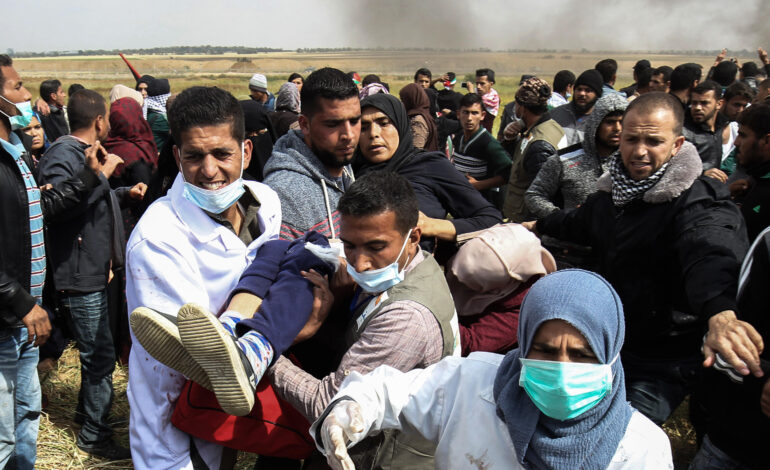 A large Israeli army campaign is taking social media by storm. The unstated aim of what is known as the “#Untie_Our_Hands” initiative is the desire to kill, with no accountability, more Palestinian protesters at the Gaza fence. The campaign was motivated by the killing of an Israeli sniper, Barel Hadaria Shmueli, who was reportedly shot from the Palestinian side of the fence on August 21.

An immediate question comes to mind: What do Israeli soldiers want, considering that they have already killed over 300 unarmed Palestinian protesters and wounded and maimed thousands more at the Gaza fence during what Palestinians referred to as the “Great March of Return” between 2018 and 2020?

This “march” is now being renewed, though it often takes place at night, where frustrated Palestinian youth gather in their thousands, chanting anti-Israeli occupation slogans and, at times, throwing rocks at Israeli snipers who are stationed nearly a mile away.

Months after the Israeli onslaught on Gaza — a relatively brief but deadly war between May 10-21 — the stifling status quo in the besieged Strip has not changed: The hermetic Israeli siege, the snipers, the occasional nightly bombardment, the devastating unemployment, the closures and the lack of everything, from clean water to cement to even cancer medication.

Therefore, it should not be surprising that Palestinians in Gaza, especially the youth, are in desperate need of a platform to express their justifiable rage at this ongoing misery; thus, the renewed mass protests at the fence.

Israeli politicians and media intentionally exaggerate the “threat” posed by the Gaza protesters to Israel’s security. They speak of “incendiary balloons” as if they are 500-pound bombs dropped by fighter jets. They are terrified by the prospect of Gaza kids “breaching the border”, with reference to fences that Israel has arbitrarily established around Gaza without respecting any ceasefire demarcations as recognized by the United Nations.

This fear-mongering is now back with a vengeance, as the killing of the Israeli sniper is offering an opportunity for Israeli politicians to present themselves as the defenders of the army and the champions of Israeli “security.” A political witch hunt quickly followed, regarding those who are supposedly “cuffing the hands of our troops.”

Israeli snipers — per their own testimonies — keep track of the number of Palestinians they shoot, try to break each others’ records and cheer on video when they document a “clean shot” of a Palestinian protester

This same assertion was made by Naftali Bennett in 2019, before he became the country’s prime minister. “The High Court is cuffing the hands of IDF troops,” Bennett has said, vowing to “free the IDF from the High Court.”

A year earlier, Bennett offered more details on how he intends to end Palestinian protests at the Gaza fence.  Responding to a question during an Israeli Army Radio interview on what he would do if he were the country’s defense minister, he replied, “I would not allow terrorists to cross the border from Gaza every day… and if they do, we should shoot to kill. Terrorists from Gaza should not enter Israel… Just as in Lebanon, Syria or anywhere else we should shoot to kill.”

The emphasis on “killing” in response to any form of Palestinian protests seemed to be the common denominator between Israeli officials, military brass and even ordinary soldiers. The latter, who are purportedly behind the social media campaign, seem to be enjoying their time at the Gaza fence. Israeli snipers — per their own testimonies — keep track of the number of Palestinians they shoot, try to break each others’ records and cheer on video when they document a “clean shot” of a Palestinian protester, which should demonstrate the horrific violence meted out against those Palestinian youth.

Israeli snipers at the Gaza fence work in pairs. A third person, known as the “locator”, helps the snipers locate their next target. Eden is an Israeli sniper, who, among others, gave testimonies to the Israeli newspaper Haaretz, in March 2020. Eden is particularly proud of a grizzly milestone that he and his team have achieved.

“On that day, our pair had the largest number of hits, 42 in all,” he said. “My locator wasn’t supposed to shoot, but I gave him a break, because we were getting close to the end of our stint, and he didn’t have knees. In the end you want to leave with the feeling that you did something, that you weren’t a sniper during exercises only. So, after I had a few hits, I suggested to him that we switch. He got around 28 knees there, I’d say.”

Such testimonies are further validated by occasional video footage of Israeli snipers cheering after shooting Palestinian kids at the fence. In April 2018, a particular video of cheering soldiers, along with the kind of dialogue that indicates that Israelis have no regard for Palestinian lives whatsoever, was leaked to international media. Even CNN reported on it.

Considering the disproportionate number of Palestinian casualties which, at times, push Palestinian morgues in Gaza to full capacity, it is inconceivable what Israeli soldiers, army generals and politicians want exactly when they speak of “untying their hands.”

This violent phenomenon is not confined to Gaza. The debate on Israel’s “shoot-to-kill” policy in the rest of the occupied Palestinian territories has been raging on for years. In 2017, Human Rights Watch linked the increased number of Palestinian casualties, who are killed at the hands of trigger-happy soldiers, to the violent discourse emanating from the Israeli government itself.

HRW “has documented numerous statements since October 2015, by senior Israeli politicians, including the police minister and defense minister, calling on police and soldiers to shoot to kill suspected attackers, irrespective of whether lethal force is actually strictly necessary to protect life,” the report read.

The above issue was highlighted in the execution of the incapacitated Palestinian, Abdel Fattah al-Sharif, in the occupied city of Al-Khalil, Hebron, in March 2016 and in the killing of Ahmad Erekat at a military checkpoint in the West Bank in July 2020. Not only did Erekat pose no immediate threat to the lives of the occupation soldiers, but according to a statement by 83 Palestinian and international NGOs, Erekat “was then left to bleed to death for an hour and a half, while the Israeli occupying forces denied him access to medical care.”

Considering the disproportionate number of Palestinian casualties which, at times, push Palestinian morgues in Gaza to full capacity, it is inconceivable what Israeli soldiers, army generals and politicians want exactly when they speak of “untying their hands.” Far more bewildering is the international community’s apathy while Israelis debate about how many more Palestinians ought to be killed.