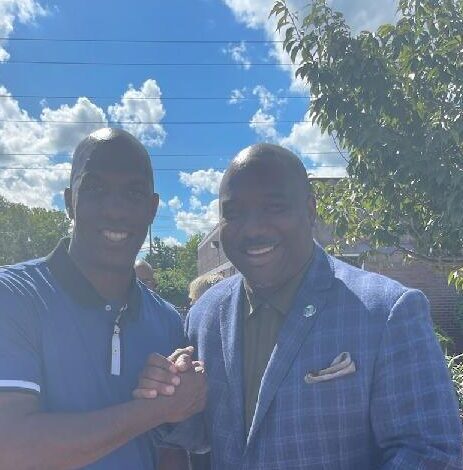 INKSTER — Flagstar Bank is partnering with other organizations in making a $1 million contribution to enhance Internet service throughout the city.

The bank, along with the foundation headed by former Detroit Pistons player Chauncey Billups and several other partner organizations, announced the project.

Flagstar’s contribution was made to the Detroit-based Strategic Alliance Community Development Corp. to create fiber-optic infrastructure and provide high-speed broadband within Inkster.

The pilot project plans to raise at least $20 million through partnerships with corporations, foundations and nonprofits with a goal of launching a national deployment plan in five to 10 years. The money would come from a combination of corporate philanthropy, foundations, federal grants and other sources, and will bring broadband services to the whole city. We are going to put in the work to ensure every kid in the country has an equal fighting chance. — Former Detroit Pistons Chauncey Billups

According to U.S. Census data, approximately 70 percent of Inkster residents have a broadband Internet subscription.

“We greatly appreciate the contributions of Flagstar Bank and all of the partners,” Jason Dixon, CEO of strategic alliance, said in a statement. “Thanks to this partnership, we have the right team and the community support to make this project a reality and bring a brighter future to Inkster and its residents. By empowering Inkster, we can demonstrate to the country that projects like this can be successful and we are looking for more partners to join us in the fight to end the digital divide.”

The project has the potential to go beyond residential Internet services to include more advanced forms of manufacturing that lead to job creation. Groundbreaking for the project and training for workforce development will occur later this year, with the project completing by mid-2022.

Other partners include Nokia, the Chauncey Billups Foundation, the Motor City Leadership Council, AuthorityHealth, the A. Philip Randolph Institute, Festo, the cities of Inkster, Highland Park, Muskegon Heights and Ypsilanti, Vermeer, the Michigan Roundtable and the Inkster Police Department.

Reggie Davis, executive vice president and president of banking at Flagstar, said that the program could bring economic development opportunities to the city, where almost one-third of the residents live in poverty.

“Businesses are tight for labor in the current market,” Davis said. “And often we have to look outside of our own communities for that talent. But I’m here to tell you today that that talent exists right here in Inkster. And we’re excited to nurture the future of this community and we’re hopeful that this investment will attract large manufacturing companies and allow Inkster to become a technology hub to attract and train a diverse workforce right here and in its own community.”

The money from Flagstar is part of the bank’s larger corporate philanthropy tied to diversity, equity and inclusion, which last year included $1 million in grants for minority-owned small businesses.

“This program has so much potential to help in the fight for equality and resolution,” Billups said. “We are going to put in the work to ensure every kid in the country has an equal fighting chance.”