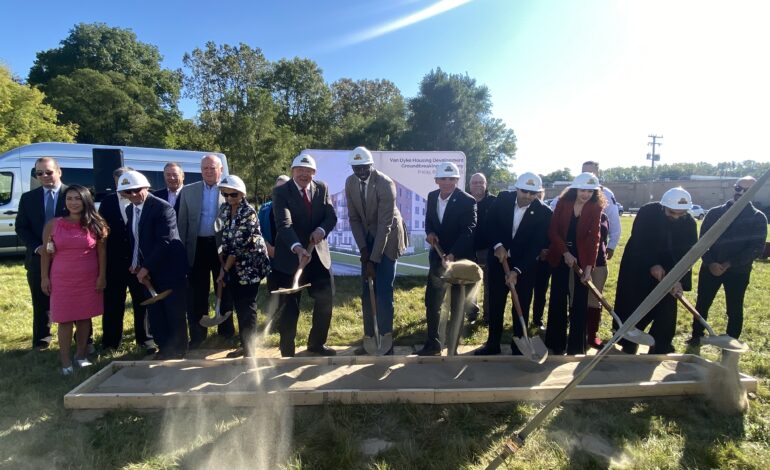 According to a press release, over the next 18-months, a four-story, mixed-use affordable housing complex with 135 apartment units and 9,000 square feet of commercial space will be constructed, while a 7-acre wetland area will be preserved and include a public park on the banks of the Clinton River. The project is located at 43700 Van Dyke.

In addition, the foundation announced plans for a $25 million project in Oakland County to include foundation offices, senior assisted living and housing. “There is a tremendous need for affordable housing across this region, including among New Americans,” said Martin Manna, president of the Chaldean Community Foundation and the Chaldean Chamber of Commerce. “These planned developments will put a small dent in the more than 1,000 Foundation clients we know of who are seeking affordable housing. In addition, there is currently no culturally appropriate compassionate senior assisted living facility that is focused on our community. We’re working to change that and care for the people we serve.”

The projects will be funded in part by the Michigan State Housing Development Authority and a capital campaign underway through the foundation. $8 million has been raised to date, with an additional $5 million sought.

“Sterling Heights is home to a large Chaldean population and we have made it our vision to be an inclusive and welcoming community to all as we work hard to stay connected with the Chaldean community in Sterling Heights,” said Sterling Heights Mayor Michael Taylor. “Martin Manna and the entire staff at the Chaldean Community Foundation has been an incredible partner to us, assisting with that connectivity through education, outreach and critical translation services when we’ve needed them, such as during our 2020 Census campaign, and for important public health information and emergency alerts. We are thrilled to now be able to support and celebrate them as they embark on this exciting mixed-use housing development that will help provide long-term housing for more than 1,000 in our community.”

Last summer, the Chaldean Foundation unveiled its new headquarters in Sterling Heights after a 19,000-square-foot expansion, nearly tripling the size of the facility, to meet the ever-growing needs of the 35,000 individuals served annually by the organization.

The foundation’s offices include a primary health clinic serving both insured and uninsured patients; a behavioral health clinic providing mental health services; a full-sized multi-functional gymnasium and a life skills area to provide education and recreation programs for seniors, youth and individuals with developmental and cognitive disabilities – including music and art therapy.

The planned Oakland County office will have similar amenities. The foundation expects to break ground on that project in late spring. The Chaldean Community Foundation was launched in 2008 as the charitable arm of the Chaldean American Chamber of Commerce to assist the growing immigrant population after the U.S.-led invasion of Iraq, when some 35,000 Chaldean and Iraqi refugees moved to the region. Services provided by Foundation staff are open to all and related to workforce development, immigration, housing, language learning, behavioral health, access to healthcare and other basic needs.