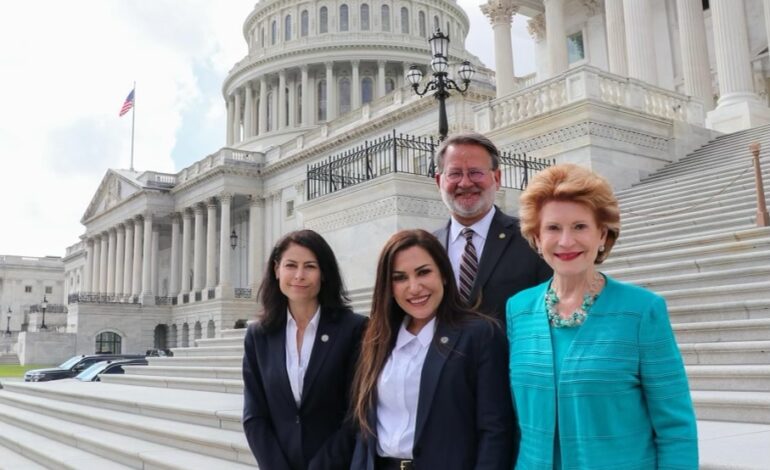 WASHINGTON, D.C. — Michigan Solicitor General Fadwa Hammoud made history on Tuesday as the first Arab American Muslim woman to argue before the U.S. Supreme Court. She argued on behalf of the state in the case Brown v. Davenport.

The case was one of the first the Supreme Court heard in its October term, now that the justices have returned to in-person arguments following COVID-19 lockdowns. An audio feed is available on SCOTUS’ website. The courtroom still remains closed to the general public due to coronavirus restrictions.

“Having achieved this first for an Arab Muslim woman, I hope we can soon transcend representation as a civic ideal and strive for full integration into all of our democratic bodies,” Hammoud told The Arab American News. “This democracy has given us so much, and we have much to offer it in turn.

“But more importantly, I am passionate about the position the state is asserting — a position that ensures that federal judges, when reviewing a habeas corpus petition, give appropriate respect and deference to our state court decisions. And here, that means respect and deference, in accordance with congressional intent and Supreme Court precedent, to the 11 Michigan judges who adjudicated Davenport’s case.” Having achieved this first for an Arab Muslim woman, I hope we can soon transcend representation as a civic ideal and strive for full integration into all of our democratic bodies. — Michigan Solicitor General Fadwa Hammoud

The case in which Hammoud argued concerns the 2007 conviction of Ervine Davenport in Kalamazoo Circuit Court. Davenport had strangled Annette White to death, threw her body in a field, then went to her apartment and stole her property, and later bragged that he “offed” her.

Davenport was shackled at trial, but the court failed to place on the record the reasons why he was shackled. State attorneys concede that was a constitutional error, but it was a harmless error given the evidence of Davenport’s guilt was overwhelming. The case was closed on the merits in the state court, which also found the shackling error to be harmless beyond a reasonable doubt. Davenport then filed a petition for habeas corpus in the federal district court; that court upheld the state court findings of harmless error in Davenport’s case.

But in September 2020, a divided panel of the Sixth Circuit Court of Appeals disagreed, reversing the federal district court’s denial of habeas corpus relief. Hammoud explained to the Supreme Court that a federal judge may not simply substitute his or her own judgment for the judgment of a state court when it is not contrary to or an unreasonable application of federal law. Hammoud’s position, on behalf of the state, was that once a state court has adjudicated a criminal case, a federal judge on review must give proper deference to that court’s decision prior to granting relief, as required by Congress. A decision on the matter is expected by next July.

In addition to Tuesday’s history-making appearance in front of the highest court in the country, Hammoud became the nation’s first Arab American Muslim solicitor general when Attorney General Dana Nessel appointed her at the beginning of 2019 to serve as Michigan’s 12th solicitor general.

“I’m incredibly proud to have Solicitor General Fadwa Hammoud appear before the Supreme Court on behalf of my office,” Nessel said before Hammoud’s appearance. “Not just because she’s the first Arab American Muslim woman to argue before the U.S. Supreme Court, but also because she’s such an effective advocate for the people of Michigan. I look forward to hearing her argument on Tuesday in this watershed case.”

(Hammoud) makes us proud each and every day. She is a brilliant legal scholar and attorney (who) represents our state well. — U.S. Senator Gary Peters (D-MI)

Hammoud was one of four women making their Supreme Court debut during the sitting on Tuesday. Michigan Democratic Senators Garry Peters and Debbie Stabenow both came to the Supreme Court building to congratulate Hammoud on her achievement.

“We are all so excited for Solicitor General Hammoud for being here in Washington,” Peters said in a video message on Tuesday on the steps of the court, along with Stabenow, Hammoud and Nessel. “She did an amazing job this morning before the Supreme Court, arguing this case. She makes us proud each and every day. She is a brilliant legal scholar and attorney (who) represents our state well.”

So excited to join @SenGaryPeters and @MIAttyGen in congratulating Michigan’s Solicitor General, Fadwa Hammoud, the first Arab-American Muslim woman to argue a case in front of the U.S. Supreme Court! pic.twitter.com/26ncRHRn8f

“A culmination of hard work”

“My argument before the U.S. Supreme Court was a culmination of hard work by brilliant attorneys at the Michigan Department of Attorney General and a reflection of my community’s contribution to public service,” Hammoud told The Arab American News. “Every level of our government needs to— at the very least— reflect the diversity of our country itself. I am fortunate enough to work for Attorney General Dana Nessel, who values that concept through word and deed.”

But Hammoud’s journey is also exemplary of the hard work of the working class, immigrant Dearborn community from which she hails.

Hammoud also served as a trustee and treasurer of the Dearborn Public Schools Board of Education and the Henry Ford College Board, advocating for public education in her hometown. A first-generation American and Dearborn native, Hammoud advocated on behalf of Wayne County’s various ethnic and immigrant communities and advised state, county and city leaders on their affairs.

Governor Whitmer appointed Hammoud as a commissioner on the Commission on Middle Eastern American Affairs within the Michigan Department of Civil Rights, among other executive and legislative advisory bodies. Hammoud currently serves as vice president of the Arab American Political Action Committee (AAPAC), where she promotes civic engagement and impact within Michigan’s Arab American communities.

Hammoud earned a Bachelor of Arts degree in political science and communication from the University of Michigan-Dearborn and later graduated from the Wayne State University Law School. She clerked for the Judge George Steeh in the U.S. District Court for the Eastern District of Michigan.