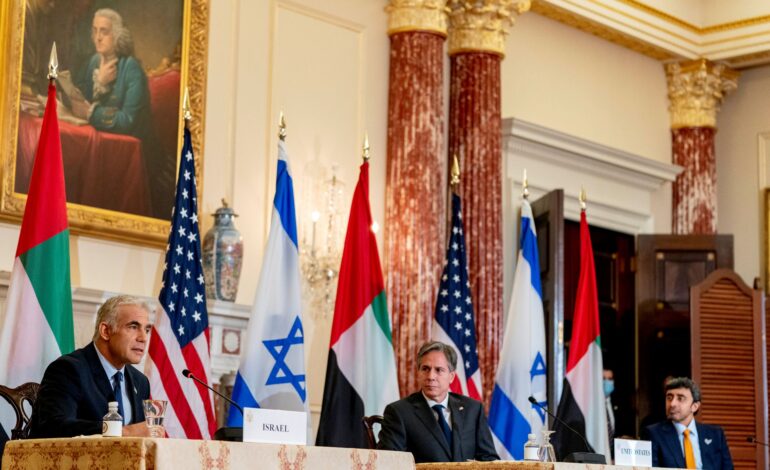 WASHINGTON, D.C. — The U.S. will push ahead with the reopening of its Palestinian diplomatic mission in Jerusalem, despite repeated objections from top Israeli officials over the development.

U.S. Secretary of State Antony Blinken said on Wednesday that the reopening, which is opposed by Israel’s new cross-party power-sharing government, is meant to deepen diplomatic “ties with the Palestinians.”

The consulate was absorbed into the U.S. Embassy that was moved to Jerusalem from Tel Aviv in 2018 by former president Trump, a step celebrated by Israel and condemned by Palestinians.

Israel regards all of Jerusalem as its capital and disregards Palestinians’ rights over territories it has occupied through multiple military and ethnic cleansing campaigns over the last century. Israel’s far right, settlement-leader Prime Minister Naftali Bennett has expressed nervousness that the reintroduction of a diplomatic foothold for the Palestinians in Jerusalem would destabilize his government’s power in the region.

Blinken said he hopes the resumption of the diplomatic mission in Jerusalem would be a “force for progress” in the region.

Blinken spoke about the plan at a Washington news conference alongside visiting Israeli Foreign Minister Yair Lapid and United Arab Emirates Sheikh Abdullah Bin Zayed Al Nahyan. He did not give an exact date for the reopening. The centrist Lapid is part of a power sharing government with Bennett.

Ahead of the conference between Blinken and Lapid, Israeli Justice Minister Gideon Saar said Israel would not agree to the consulate’s reopening.

“I spoke with (Bennett) a couple of times on the issue,” Saar said, as reported by The Washington Post. “We are on the same page and we don’t see differently. Someone said it’s an electoral commitment. But for us, it’s a generation’s commitment. We will not compromise on this.”

Lapid said that Palestinians were “entitled to a decent way of life” and expressed his goal to work with the Palestinian Authority. Palestinians have largely denounced the PA and the government in the West Bank as tools of the Israeli occupation.

The Biden administration says it wants to repair diplomatic relations with Palestine, but has thrown its full support behind Israel during its campaign to ethnically cleans East Jerusalem neighborhoods and its provocations against worshipers in Jerusalem during Ramadan this past spring, which led to a multi-week bombardment of the Gaza Strip after Palestinian retaliation, killing hundreds of already economically besieged Palestinians.

Biden has also embraced Trump’s so-called “Abraham Accords” or the military and economic normalization treaties between UAE and Israel facilitated by the previous U.S. administration.

The UAE was the first of four Arab states to announce such deals with Israel, after which Bahrain, Sudan and Morocco followed suit. Trump’s accords followed a “peace plan” for the Israel and Palestine region, drawn up between the U.S. and Israel’s far right governments, but which lacked input or consensus from Palestinians themselves.

U.S. officials have said the conditions are not right to press for a resumption of Israeli-Palestinian peace talks, which collapsed in 2014.

Biden administration officials have said the Abraham Accords are no substitute for a two-state solution between Israelis and Palestinians, a notion that the Democratic president and his party largely adhere to.